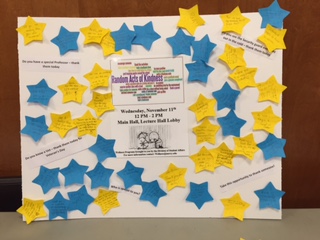 National Kindness Week made its way to Mercy this past month to encourage students and faculty to engage in acts of kindness to other people.

To celebrate this event, students were able to write little notes of kindness on star-shaped stickers and post them on a small board.

Colleen Powers, director of the Health and Wellness Program, organized the event to get individuals thinking about how they go about their lives and treat other people.

“We wanted to make people stop and think. We wanted them to think about how they behave in their lives, and how they treat other people.”

Powers explains how she wants to have the board visible for students and faculty and believes that National Kindness Week should be an annual event instead of a week.

“The board will be up for the rest of the day, and then we’ll post it somewhere that’s visible, probably upstairs. To be honest, this should be an all year-round thing. It shouldn’t be a one-day event.”

Powers gave some examples of how Mercy students can participate in different acts of generosity every day. They are simple, but they do not need to be groundbreaking.

“They can do a lot. They can hold the door for someone. If they’re driving into campus, they can thank the guard who is standing out there. You can thank your professors. There’s nothing you have to do that’s earth-shattering.”

She feels that this event was a reminder for individuals, mainly because people are busy with their lives, and they really do not have a sense of what is going on around them.

“I think it’s a reminder because people are really busy, and they walk around with their heads down, looking at their phones. They’re not really aware of what could be going on around them. I think this event makes you think and brings some awareness.”

Senior psychology major Kelley Boyce believes one of the reasons why people show little kindness to other people is because it takes their time.

“It takes their time. It’s like an extra thing out of your day you have to do.”

When asked if National Kindness Week should be celebrated a month instead of a week, Boyce stated it should be kept for a week because students would forget that it is still going on.

“No, I think it should be a week because I think people would forget after a week. If you do a whole month, it might get forgotten.”

Senior psychology major Evelyn Toledo stated that the reason why it is hard for individuals to do nice things for other people is because most people feel like their kindness will be take advantage of, or someone will become too dependent on that one person.

“In my view, some people may think that their kindness will be taken for granted. It’s hard for people to be kind.”

Senior computer arts major EJ Marcus brought up an interesting point, which is similar to Powers’ belief when it comes to society being unaware of what is going on in the world.

“I think it’s because everyone is way too self-centered. Everyone looks at their phones, no one really interacts with other people. Everyone’s more focused on getting Instagram followers and seeming cool.”

Powers and Boyce recently participated in random acts of kindness. With Powers, she greets the security guard at the front entrance when she enters the campus.

“I’m always thanking the guard out front. I try to hold the door for others.”

Boyce recently went to Yonkers with ENVISAJ for a community event.

“We set up solar panels for our community garden.”

Marcus describes acts of kindness as treating others with respect. He states that there are many people will go out of their way to do something generous for someone, but it does not always mean it constitutes for kindness.

“Treating others like you want to be treated. There’s a lot of people you see go out of their way to help someone out. That’s nice, but that always doesn’t constitute kindness. They’re smaller things.”

There are very few people who are willing to help another person out. Toledo is that type of person to give assistance to someone who needs it.

“If someone needs my help, I’m willing to help. I always open the door for people.”

Each person gave the exact same answer when asked about examples of kindness and generosity. Holding the door for someone was the top answer each person gave. It was also the first answer they could think of when it came to showing kindness to others.

If this event were celebrated for a month instead of a week, Powers would like see more visuals around campus to encourage more awareness about the topic.

“There’s nothing wrong with having these boards up and reminding people. Maybe a little more visuals around campus. You can see a few signs here and there to make you stop and think.”

“I would like people to look around and see what they have and be thankful. I want people to slow down a bit, and think about where they’re going, what they’re doing. Thank the person who is serving you in the cafeteria and the guards who are keeping you safe on campus.”