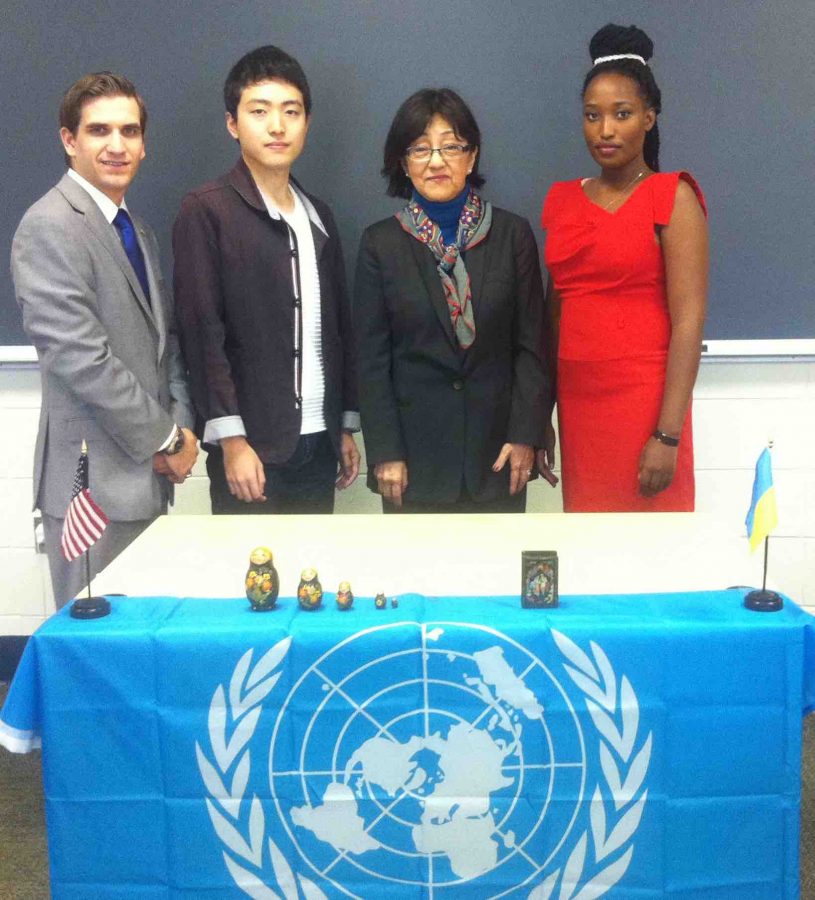 The international week of Mercy College was a success as they kicked off the Universal Children Day event.

They had three panelist, which were students of Mercy College from three different backrounds. The panelist were Yoela Koplow from Japan, Sandre Uwiringiyimana  from Democratic Republic of Congo, and Sasha from Ukraine. All three panelist were given the opportunity to share about their childhood.

The first panelist that was up were Yoela Koplow that was born and raised in Japan. Koplow is an exchange student from Japan that received the opportunity to attended Mercy College to be in a diverse school. Koplow wanted to be here because he never had experience in attending a school with diversity.

“When I was at school, I never had an foreign classmate, all my friend were Japanese people. There was no diversity at the Japanese schools,” said Koplow.

The desire in wanting to be in a place where there is a diversity came true to Koplow.  Koplow started to go in deeper in talking about his childhood. He starts talking about the education of Japan, where he started school at the age of 6 years old.  Kids start school at the age of 6 years old and continue at 9 years said Koplow. The type of education Japan is called compulsory. Compulsory education refers to a period of education that is required of persons, imposed by law. One thing about Kopolw was that he did not like to study so much, which is a down fall for a lot of kids and teens that are living in this generation.

The interesting fact about the education of the Japan is that student can study for free. Students can study for free, all they have to do is pay for school lunch, said Koplow. Once the kids of Japan finish school, 97 percent continue to study after high school.

In his childhood, Yoela Koplow talks about his grandparents and how much he love them. I really enjoy being with my grandparents because they give me money – most of the grandparents try to adopt there grandchild’s by giving them money, but of course I loved them and love spending time with my grandparents, thats why I went to the house said Koplow. Koplow had a very different childhood life from being in a country with no diversity, except for the 1 percent.

Uwiringiyimana childhood was not easy at all.

” I had a very happy childhood and was raised by my extraordinary parents, said Uwiringiyiman. One thing that she was talking about was the importance of education. At a very young age my parents made sure we all went to school and education is the key of life said Uwiringiyiman.”

The parents Uwiringiyiman was not able to afford for all of her siblings to go to school, but how ever Sandre Uwiringiyiman made it through. “My parents would say who ever have the best grands will get their tuition paid,” said Uwiringiyiman.

This have brought determination a upon her siblings and herself. The fact that Uwiringiyiman had a very happy childhood because she was living in a community where they was all accepting and everybody was out and helping one an other.

Sandre Uwiringiyiman childhood went through a down fall.

“I remember in 2004, we was force out of Congo and ended up at a refugee camp,” said Uwiringiyiman. “166 people died, including my little sister.”

Life was very had for the family Sandre Uwiringiyiman, but her family recivied help from the UN and received a settlement where her family was sent to Rochester, New York. Thought the struggles Uwiringiyiman had within her family –  she became an activist for refugee, girls, and eduction right’s.

The last panelists were Shaha, born and raised in Odessa, Ukraine. The family of Shaha was different than most family. During his childhood, his father worked for the ministry for the interior, which was a hight or low in power. The father of Shaha handle the secret police, military intelligence and policy.

Shaha states that U.S. education focus on Nationalistic propaganda and in Ukraine we are were singing our national anthem before doing anything eles. I remember as a kid in school we used to watch videos about our presidents and how good he is and what he did for our country, said Shaha. The life of Shaha very difficult because as the Soviet regime changed; it boret unstably for us and tourist.

“I remember two men came to my house and asked us question about if your dad ever said anything anti-Ukraine, and we said no, ‘my dad loves this country,'” said Shaha.

At that moment, Shaha described the feeling of fear with in him and the Ukrainians. During his childhood, his grandmother passed away.

“My grandmother was very close to my family, and my father decided to move because the only thing that was keeping us in Ukraine was her,” said Shaha.

“In Ukraine, we had medicine, but very old medicine because Ukraine did not have money to get new medicine,” said Shaha.

Shaha his been living in the U.S. for now seven years. It gives me a great appreciation, because the freedom you have here and the opportunities you have here compare to Ukraine,” said Shaha.