The Disease of Addiction And The Damage It Leaves Behind 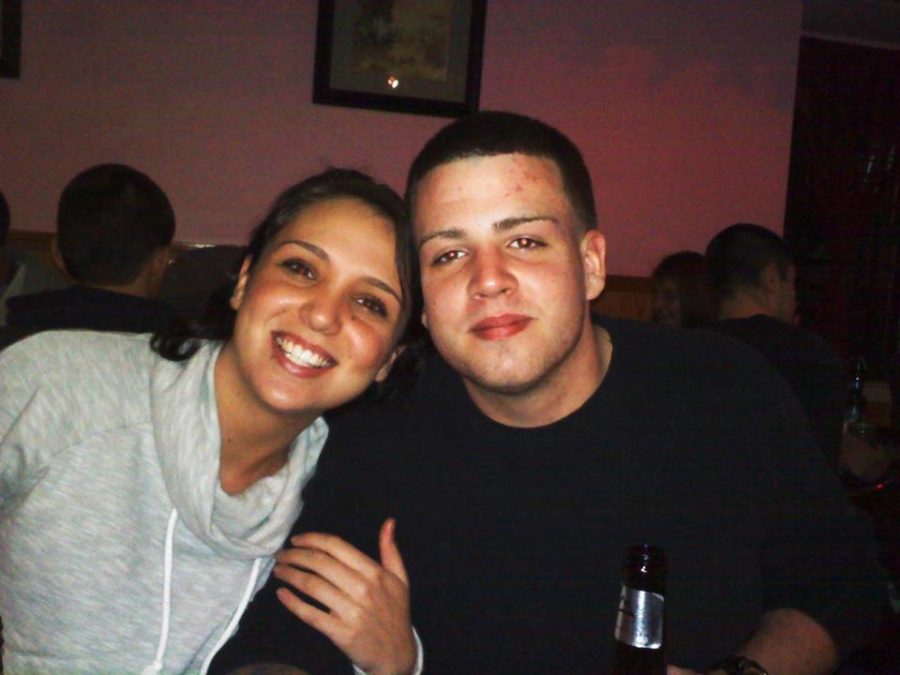 It was the last week of May in 2015. Flowers were in bloom, birds were chirping and the sun was shining enough one could feel it’s warmth. The cold of the winter seemed to be dissipating. That was until senior business major, Danielle Egan received a phone call that most have nightmares about. As she listened to the words being spoken on the other end, the cold chilled her entire body.

And that’s when she heard a voice.

Two years prior from this phone call, Bobby was Egan’s boyfriend of four years.

From the beginning, it was childhood romance. A story told so often before.

A little boy and a little girl living on the same block. They both develop crushes. They kiss. And when they finally matured enough to realize that these feelings were real, they started dating.

Bobby was shy and innocent boy who would barely talk to anyone. Anyone but Egan that is.

“When we first started dating he was a sweet innocent boy who didn’t like to leave his basement, and his biggest addiction was video games,” Egan says about the beginning of their relationship.

A social butterfly, which people would flock to be around. Bobby was always the life of the party. Friends would describe him as the funny, loud, goofy kid who always brought a smile to the friends he was with.

But for Egan, that funny, loud and goofy kid began to become a beautiful distant memory.

Although she doesn’t remember how exactly it all started Egan knew something was going on. And it was becoming worse and worse.

“[Bobby] was very close to my family and a huge part of my life but we started to fight and break up a lot when he started to get involved with painkillers,” Egan remembers.

Deaths from prescription drug abuse are on the rise, according to the CDC. In an effort to deal with the problem, the FDA recently recommended more strict controls on popular and frequently prescribed painkillers, such as Vicodin and Oxycodone (otherwise known on the street as blues).

With stricter controls, the price of these painkillers on the street have increased significantly. Forcing those with an addiction to turn to a cheaper and more dangerous alternative such as heroin.

“He started to use (drugs) so frequently and was very shady about everything,” Egan remembers.

Bobby not only was lying to Egan about what he was doing. But he started getting new jobs with other kids who also did drugs. Enabling and convincing him to also start selling the drugs himself. This dangerous habit and living style had soon become a way of life, and a source of income.

Falling deeper and deeper into the rabbit hole, he showed signs unlikely of ever making it out.

It got to a point where Egan no longer even mattered to Bobby. She was the one aspect of his life who wanted to stop him from continuing down this dangerous and life threatening path.

“It got to a point where I didn’t matter to him.” Egan says. “I gave him the option between me or the drugs, not understanding at the time that it was out of his control.”

Upon the ultimatum, Bobby broke down crying. Ashamed at what had become of their relationship because of his addiction.

“He couldn’t stop, he admitted to me,” Egan says. “And he really didn’t want to. There was no one to turn to considering his father and sister were also using.”

Like in so many cases with addicts, their relationships with the people looking out for their best interest telling them to stop fall apart. And with Bobby and Egan, it was no different.

He surrounded himself with people that would not stop him. People who would not tell him that this was not wrong and not okay. People who did not believe this was a disease that needed treatment. People who enabled him.

“We lost contact after he stopped trying to fix things, and began to let his addiction really take over,” Egan remembers after their four year relationship fell apart.

Egan began to only hear things that mutual friends would tell her about Bobby. And that was all she knew of him for the two years.

The stories she would hear were horrible, and she sometimes refused to believe they were true. Always getting into trouble. Stealing from people. Dealing drugs. Anything to get his next high. Eventually, Bobby was court mandated to rehab. It was a blessing in disguise, everyone thought, and he was released just a few short months later.

Although everyone thought he was doing so much better after rehab, the addiction was still always on the back of Bobby’s mind. Like any addict, it’s a lifelong struggle and an everyday battle mentally and physically, much like depression or anxiety, says the CDC.

Bobby was scheduled for a court appearance and would likely be sent to jail for iPhone theft and assault, because he had failed a drug test that week.

The night before the court date Bobby confided in a friend wanting to get high one last time. That night Bobby injected a bad batch of heroine into his veins, along with painkillers, and never woke up.

He was found dead in his bedroom, with bad heroine and oxy’s in his blood stream.

Everyone was in devastation and disbelief, including Egan.

“The next few days were a blur as I watched his family fall apart and break down.”

Bobby had a disease. A disease that 40 million other Americans also are struggling with. That’s one in every seven Americans. The disease of addiction.

And with a whopping 40 million people, that makes this disease bigger than heart disease (19 million), diabetes (26 million) and even cancer (27 million).

Addiction as defined by CASA is a complex disease, often chronic in nature, which affects the functioning of the brain and body. It also causes serious damage to families, relationships, schools, workplaces and neighborhoods. The most common symptoms of addiction are severe loss of control, continued use despite serious consequences, preoccupation with using, failed attempts to quit, tolerance and withdrawal. Addiction can be effectively prevented, treated and managed by healthcare professionals in combination with family or peer support.

It is caused by combination of behavioral, environmental and biological factors. And genetic risks factors only account for about half of the likelihood that an individual will develop addiction

Addiction even causes changes in the functioning of the brain and body.

Only one in every 10 actually seeks out the professional help they need to overcome their addiction.

And without this professional treatment this disease can lead to illness or death, such as in Bobby’s case.

“The sweet and innocent boy I once knew turned into a monster…” Egan remembers. “I just wish now that I could go back in time and try and help.”

But much like Egan many don’t know how at the time when they most need to know. But now having a better understanding of the disease believes that just the understanding of addiction as a disease is a huge step for people in itself.

The first things one can do to help is to identify the steps of addiction.

Whether it be for yourself or others the following questions can help to identify whether you or a loved one have a problem involving addiction.

Does you/the person take the drug in larger amounts or for longer than they meant to?
Do you/they want to cut down or stop using the drug but can’t?
Do you/they spend a lot of time getting, using, or recovering from  the drug?
Do you/they have cravings and urges to use the drug?
Are you/they unable to manage their responsibilities at  work, home, or school, because of drug use?
Do you/they continue to use a drug, even when it causes problems in their relationships?
Do you/they give up important social, recreational or work-related activities because of drug use?
Do you/they use drugs again and again, even when it puts them in danger?
Do you/they continue to use, even when they know they have a physical or psychological problem that could have been caused or made worse by the drug?
Do you/they take more of the drug to get the effect they want?
Have you/they developed withdrawal symptoms, which can be relieved by taking more of the drug? (Some withdrawal symptoms can be obvious, but others can be more subtle—like irritability or nervousness.

If the answer of any or all of these questions for you or your friends is yes, it may mean that there is an existent problem with substance abuse.

But getting help is better said than done. It’s something that the person who is dealing with the addiction has to want to do. They have to be willing to receive the help that is needed.

Although they have to make the decision on their own they cannot do it on their own. They need to support of others trying to help them to overcome this addiction. The substance of abuse changes the brain, these changes make the brain of that person feel as if they cannot stop even if they are ready to.

If a loved one speaks to you about seeking out help that is a huge step. It is a huge thing to admit knowing that the steps ahead are even more difficult and full of even more hard work.

One can begin to take the proper steps to locate a professional in which can help to overcome this addiction. One can call and just talk to a health professional about their opinion and possibly get a referral from them if they are not willing to talk to you specifically. But help is available and waiting to be called upon.

Then there’s those individuals that are not so willing to go into treatment. Those who truly believe that there is nothing wrong and live in constant fear of their crutch will be taken away.

For these individuals tough love is the most important thing to display. No one wants to lose all of their loved ones. So comes an intervention with that individual. An intervention in and of itself is difficult. It’s something that as a loved one is extremely difficult. But sometimes it needs to be done.

There is nothing worse than telling someone that you love that this is the last straw. Giving them an ultimatum between family and love or drugs. But it is necessary in order to make that addict understand just the impact their addiction is having on the people around them.

They don’t realize they individuals that they love back are in fact walking on egg shells everyday. It’s a constant internal battle to try to help but to also keep them happy. And there is never a winning side in an everyday battle.

“A boy with so much potential and love in his heart wasted his life and it has had a huge effect on everyone involved,” Egan says.

But Bobby lives on in a much bigger way now. He lives on to help the lives of others who are going through the same struggles with the very same disease. Possibly even saving a life.