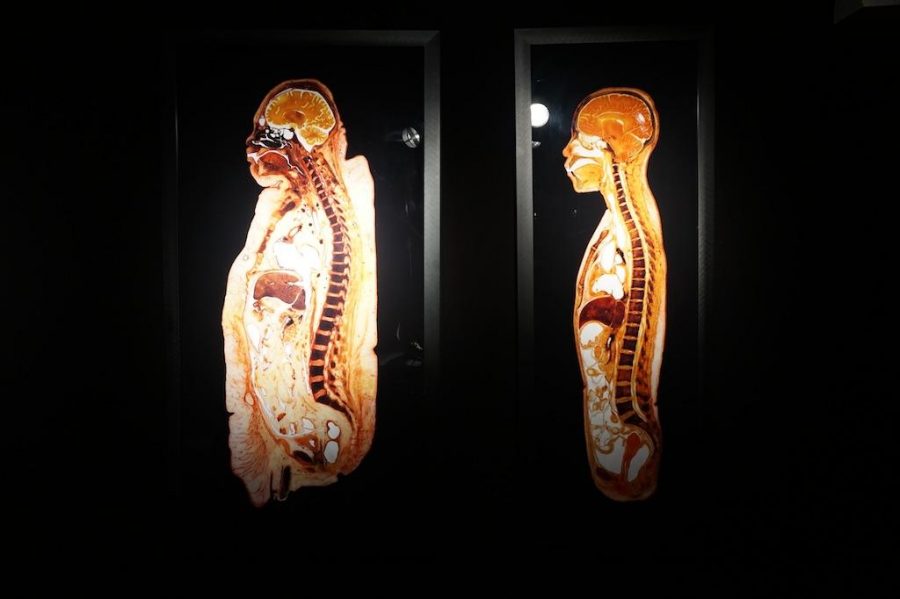 “Body Worlds” of Gunther Von Hagens has been shown all over the world. Of course, New York has one of the exhibits in Discovery Times Square. As you walk along 44th Street from Grand Central, it is easy to find Discovery Times Square among the twinkling buildings. When one steps into the exhibit, it’s time to meet real human muscles, bones and specimens.

Body Worlds in New York shows the plastination of whole-body, individual organs, and slice specimens (fixed after slicing the body). Whole-body plastinations are exhibited in various poses. Also, this exhibition describes organ functions and the long term impact of diseases and addictions on organs. For example, it shows how addiction to tobacco or alcohol affects the organs. At first glance of healthy and diseased organs, one will definitely figure out how different healthy and diseased organs are. One can also think that how stress of too many choices in this modern world has impact on our bodies. Also, in ‘We are what we eat’, visitors can think about how the foods they eat have impact on our human bodies by comparing staples among USA, Mexico, Canada, France and Japan.

Plastination is a new concept for lay people. Plastination is a unique process to preserve specimens. The process replaces bodily fluids and fat in specimens with fluid plastics that harden after so-called vacuum-forced impregnation. After the bodies are shaped into lifelike poses, they are hardened with gas, heat, or light. This process enables preserving dead human bodies from decay. This process culminates in blood vessel configurations. Vessels are so fragile that it is hard to observe the path of blood at a glance. Plastination is the solution for this. The vessels are first injected with a dyed plastic. By the time the plastic has cured, it has taken the shape of the vessels. The surrounding soft tissue can then be removed manually and chemically with the aid of enzymes. In this way, the path of blood becomes visible.

Gunther Von Hagens, creator of Body Worlds, invented plastination for his students in medical school in the 1970s. At that time, when he taught anatomy, students could only learn the human body by illustrated books, picture books and real human specimens in plastic block, which they could not even touch. Von Hagens wanted to teach more students in a better way. Finally, he came up with an idea to put plastic inside the body specimen instead of putting human specimen in the plastic. That way, it’s easier to grasp and work with and study. Students can get better understanding on human bodies. Even though it was invented for medical school students at first, it is important to general public, too. People will choose healthier lifestyle when they understand how the body works and how it can break down. Also, people should have opportunity to learn what the human body looks like and how it functions. 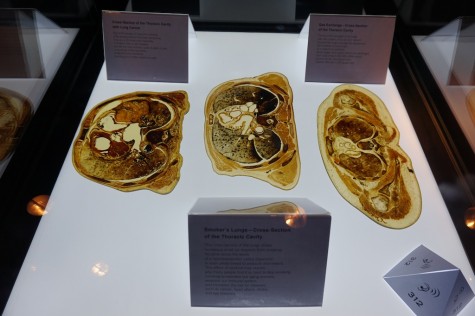 As a visitor steps into the exhibition, he or she will be fascinated by the familiar organs. What are familiar organs? Lungs! As the media always shows us about correlation between smoking and lungs, we all know how they look like. But if you look closer to the exhibited lungs, you will find out that there is a big difference among the lungs. That’s because one lung is healthy and the others are diseased. You can see a lung that has a cancer and a lung which is black from smoke. This comparison alerts smokers that smoking affects on their bodies badly and then, they might choose not to smoke. This comparison shows the relationship between a certain behavior and its impact on organs. It is a great theme since the purpose of this exhibition is to educate the lay people about their bodies.

As visitors move more steps, he or she will see “We are what we eat.” It shows how the food we eat affects our bodies. Nowadays, there are numerous diseases derived from food. Not only malnutrition, we can  contemplate malnutrition as well as  obesity and cholesterol diseases like cardiac infarction and stroke.  There is a picture of half slice of healthy human and obesity human. At first glance, they are thought to be different species. The shape of bones and the location and configuration of organs are totally different between them. The comparison of staples in different nations like USA, Canada, Mexico, Japan, and Australia shows why there are differences in rate of obesity among nations. For example, USA spend the biggest food expenditure and has the highest obesity rate. Some people will decide to eat more vegetables and less cheese and meat to meet their balance among nutrition. It makes people think about their eating habit and urges people to control their food consumption.

“It was awesome because I am interested in human body and when I was young, I wanted to be a doctor. I was happy because it helped me remember my young dream. If the Bodys World is shown in Korea again, I will go there with my family,” said international student and junior, Sung Hoon Kim, who is a business major.

The physical exhibition also deals with mental health. It is interesting since mental problems are not obviously seen in physical way. Thanks to the wit of the director, this exhibition relates the process of brain work to the stress. The stress this exhibition deals focuses on too many choices. According to the survey, the number of choices affects the satisfaction and stress. The experiment divided people in three groups and gave each group different choices. Group A couldn’t choose because they were given only one kind of chocolate. Group B had chance to choose one among seven chocolates. And the last group was given one choice out of 32. 10 percent of group A liked the chocolate and 48 percent of group B liked the chocolate as expected. But, ironically only 12 percent of group C liked the chocolate. This experiment shows that too many choices make people stress out. The stress of over-choices in recent days maybe affects the process of brain work. The director had to deal with brain process and mental health because it is really important in modern world. However, it is hard to show the importance of mental health through physical plastiniation, so it was a good choice of the director to show this experiment.

The bodies are showcased in various poses like the flamingo, Thai martial arts and football player stances. You can see how muscles and bones are placed, and it is amazing itself to see those human bodies. However, it is hard to find the differences among differently posed plastinations. It was amazing to see what is happening inside our bodies, but I felt a sense of frustration because there was no explanation about the differences among the poses and how the organs, muscles, and bones function and are moved. As the purpose of this exhibition is the education of human bodies to all people, the exhibition should have told us more.

There were plenty of things to observe in this exhibit, but sadly, there was nothing to experience. Since this kind of educational exhibit can be boring for some people, it would be much better if the exhibit offered the events that visitors can participate in and that helps visitors to understand the human bodies more easily. Touchable organ models or some toys would help people to enjoy the exhibition. Also, this exhibit was short. I could get to the exit quite quickly. I thought that I missed some part of the exhibit, but I didn’t. It was shorter than expected so I went back to the beginning and took my time to see it again.

This exhibition is great in that it can fascinate everyone from children to adults. You can enter with an open mind but you will have a lot to think about when you are out. It is short so you can take your time and observe the plastinations and read the explanations precisely. It will also help if you study about the plastination before you go. You can easily find documents about the exhibit from the website, and there is  a quiz one can take.