Speakers Offer Advice To Women: ‘Encourage to be Expected’ 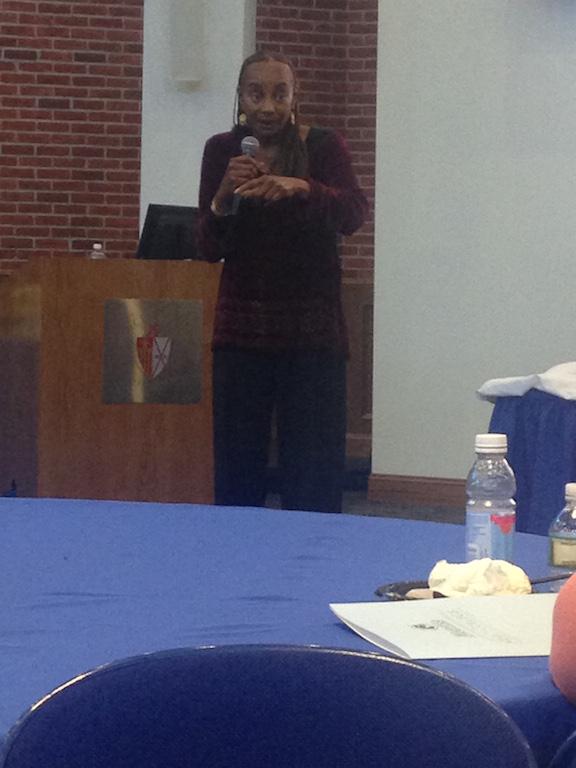 Nearly three quarters of students in Mercy College are women, and according to the Center of American Progress, almost 60 percent of undergrad and graduate degrees are earned by women.

Yet, positions of leadership are being given to the men.

In the financial services, women hold 54.2 percent of jobs but no woman holds a CEO position. These staggering statistics caused a few of the deans to meet and discuss how they can encourage women to work for higher position than those they currently hold. They decided to hold the first Women’s Empowerment event and titled it, “From Encouraged to Expected.”

The school brought in five different women from five different fields to speak to those who attended. They came to talk about their jobs, their journey to power, and give words of encouragement. 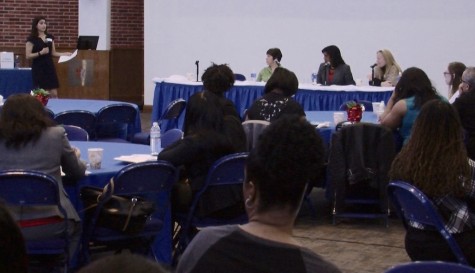 “There was a brown sidewalk with brown buildings and a green seed tumbling down the sidewalk. It got stuck in a crack in the sidewalk and seconds later, there was a stem,” describes Regina Jacobs, Vice President of Morgan Stanley Smith Barney LLC. “Then, a fuchsia flower appeared, and then the words ‘Grow where you are’ appeared.”

That was just one story told and that story helped empower Jacobs to keep moving. Coming from the Panama Canal, she was expected to live in New York and receive a bachelor’s degree. She found a job in financial services, holding a position in the same company for 30 years, including the multiple company mergers it experienced.

“My mother demanded that her daughters go to school because she felt stifled as a woman,” Lynn Stratford, Senior Vice president of UNICEF, explained.

Startford works for a not-for-profit organization that tries to empower children across the world. Surprisingly, the not-for-profit system is swamped with women, with 75 percent of women working in it as of 2011. Unfortunately, this is the only place women dominate in high positions. Stratford explains that she found this job because of her mother. Stratford wanted to quit her job and live with her parents, but with her mothers help, discovered a better plan. She started working in UNICEF New York in 1991 and has moved up since then. Before becoming the Vice President, she was Chief of Staff. In 2002, she helped create programs for its global campaign, and she isn’t the only one who rose up in her position.

First generation immigrant, Zoila Tazi, Ph.D, is currently a professor at Mercy College. Before, she was a principal and worked in programs serving “language learners” and their families. Before working with children, she was cleaning houses to pay for college. Before that, she was working in an office to survive because that was what was taught to her when she moved here. Her words of encouragement: find what you love and go for it. While Tazi was a first generation immigrant, Donna Rosato, senior editor of Consumer Reports, was the first generation to attend college.

Rosato not only was the first woman in her generation to go to college, she continued and received a Master’s in Journalism and a MBA from Columbia Business School. Her words of encouragement were to find a “champion,” a person who works in a place of power. She gave that advice because she found that people who have a champion in their lives get paid more and receive advice from those in leadership. But the advice that spoke for internal encouragement came from key note speaker Susan L. Taylor.

Taylor, founder of CARES and former editor of Essence, spoke about looking inward for peace and power and self love. She told those attending the event the story of the time when she thought she was having a heart attack. She explained that she was a single mother of her daughter making $500 a month as a writer for Essence magazine just to pay a $300 rent. She was about to get the lights turned off and she didn’t know what to do. At that moment, she thought she was having a heart attack. When she reached the hospital, the doctors explained that she was having an anxiety attack. When she learned this and headed home, she walked into a church and heard that human beings contained a divinity within themselves. At that moment, she knew she needed to find that divinity and peace within her.

She told the group to take a few minutes to sit, breath, and find peace.

At the end, she spoke to individuals and signed her books all purchased the same day of the event. When she spoke to the head of the bookstore asking about more books he was stunned. 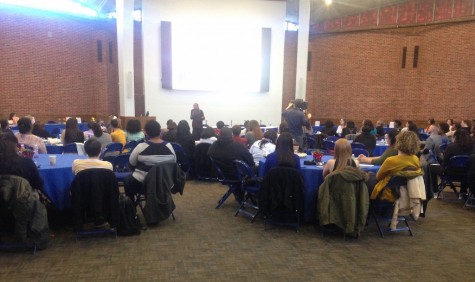 “We usually don’t get this turn out. If we purchase 50 books, we norm

ally bring back 48 books to the book store. Now, we have to purchase more books to sell in the bookstore,” he said.

Even one of the speakers was surprised.
“I’m impressed with the number of people and the extraordinary amount of diversity,” Stratford says.
What did the students have to say?

“It is inspiring to see women in leadership speak, and it is a very selfless act. The champion view stood out to me,” said Jacqui Camacho, a 26 year-old grad student said.

“I didn’t know what to expect. I liked the advice of getting to know what the job is like from people who used to work there. I also like the concept that it’s not the bad situation that defines you professionally; its how you handle it,” says Jordan Abato, 24 year-old grad student.

But this hit home for a group of students for more reasons than the advice.

With the help of Margret Cotter and a few other business honors students, Victoria Drogin started the Woman Leadership Institute program at Mercy. This program helps partner the female students, and some men, with a mentor or champion. The idea of empowering the women here in Mercy was the idea from the start. The Women’s Institute partnered with the school in making the event.

When asking those who attended what they thought, they were surprised about the turn out and all enjoyed the event. They all agreed, “meetings like this need to happen more of↔ten!”