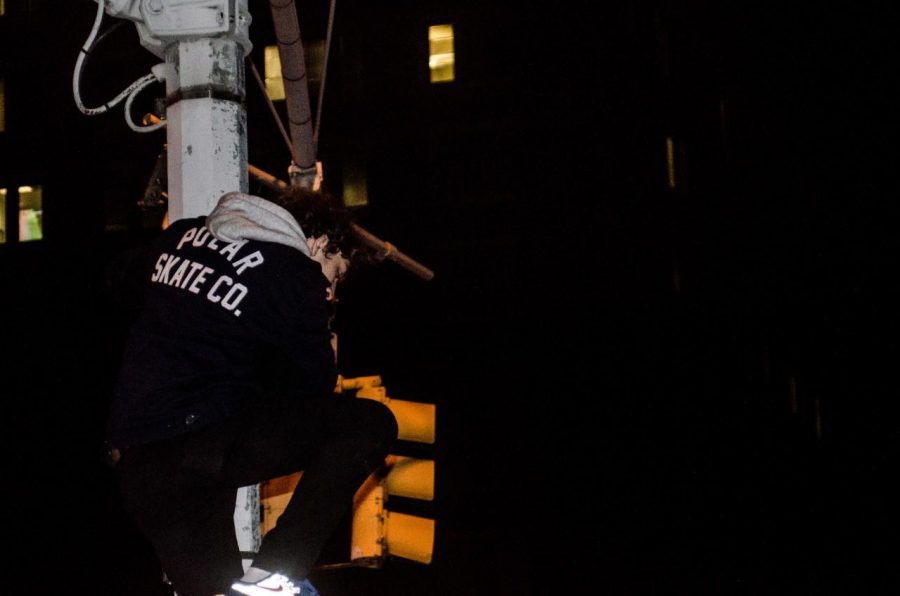 Thomas Romero lets his photography represent his feelings about depression and anxiety.

A few weeks ago, a Behavioral Science and Media Studies major was found unconscious in a classroom in Victory Hall.

A fellow classmate walked in on Thomas Romero lying on the floor and immediately went to find help. Upon stumbling into another classroom close by, he said, “Can someone help me?”

The six students sitting in the room asked him what was wrong and he proceeded to tell them what he had just seen. After the initial shock, everyone jumped up out of their seats and ran to find the room where Romero was.

Once he was found, a few students scrambled to find a professor or security, one called an ambulance, and the rest anxiously waited in the classroom alongside the one student who was checking Thomas’s pulse.

Romero suddenly began shaking, as if he were having a mini seizure. Luckily, the ambulance was on its way and Prof. Michael Perrota, Department Chair of Communication and the Arts, had just stepped into the room to take over.

Romero’s girlfriend of three years, Mandy Fong, who was in another class at the time later said, “People can really trust Prof. Perrota so he was the first person students thought of to find. I trust him to take care of Thomas.”

Romero was unconscious for thirty minutes before he slowly began waking up.

“I heard people in the distance and could feel people grabbing onto my body, but I couldn’t see anything,” Romero recalls.

The ambulance arrived in ten minutes and Romero was rushed to the St. John’s Riverside Hospital.

“I was very proud of my students for reacting so responsibly. They may have saved a colleague’s life,” said Perrota. “Mercy security, the local police and paramedics were here quickly and did a fantastic job treating Thomas.”

After being admitted into the hospital, Romero was asked what medication(s) he was on, what his name and birthday was, and where he last remembered being.

“I was hot and dizzy, so I took my jacket off and sat on the floor because it was more comfortable. I don’t remember anything past that,” he continues. “I took some of my mother’s prescribed migraine pills a few hours before because they help with my severe headaches.”

Romero has used his mother’s pills for years now and has never had a bad reaction from them.

The Food and Drug Administration (FDA) warn that overdoses can occur not only when someone abuses drugs, but misuses them. The agency claims a survey showed that nearly 52 million Americans have used prescription drugs when not authorized to by a physician. It warns that prescriptions are prescribed with one person only in mind, and with no medical oversight, taking someone else’s medication can cause a reaction, based either on the substance or its dosage.

The doctors who treated Romero first assumed he had an addiction problem, but after many tests found that this wasn’t the diagnosis.

“I am not a junkie. Recreational drugs weren’t the problem in my case,” he said.

But in the back of his head, Romero was afraid he was going through the same experience he had just gone through four years back.

“All I could think about was how I didn’t want to die, so I started to pray.”

In 2012, Romero had a 104 fever and an allergic reaction. He was foaming at the mouth and had welts on skin, so his doctor pumped him with Benadryl. In all the chaos, somehow the expert didn’t pay much attention to the dosages they were giving.

“I suddenly went into a coma and the doctors almost declared me dead, until they found a heartbeat, so I was scared it was going to happen again.”

Romero knows the root of his problems leads back to his high level of stress, anxiety and depression.

Those who suffer from those ailments seek others to find help.

“Having depression and anxiety is serious, and no one should go through it alone. But worse, many people don’t take it seriously because they don’t think it’s a real disease. They dismiss it like it’s not serious,” Mandy states.

But in reality, anxiety and depression are a serious issue, particularly in college.

Experts say anxiety is the top presenting concern among college students, ranking 41.6 percent, followed by depression at 36.4 percent. On average, 24.5 percent of students take psychotropic medications throughout their college career.

“I’m sure many college students can relate. I sometimes only ate twice in two days and didn’t sleep more than a few hours, which made me dizzy and gave me bad migraines,” says Romero.

Experts say one of the best ways to reverse anxiety and depression is to engage in relaxation techniques and have a stress outlet.

“My way of coping is by walking around downtown and taking pictures. It puts me back in my zone,” Romero says with a smile on his face.

The Internet is full of great advice and information on how to cope with anxiety and depression, but hearing first hand from a college student who is going through the same ailments as many of us makes it more relatable.

“The best idea I could ever give to anyone is that when the whole world is collapsing, just take it one day at a time,” says Romero, who tries to keep his anxiety in check by taking his problems in stride. “Take time for yourself because at the end of the day, it’s your life, and when you die, the world is going to keep turning.”