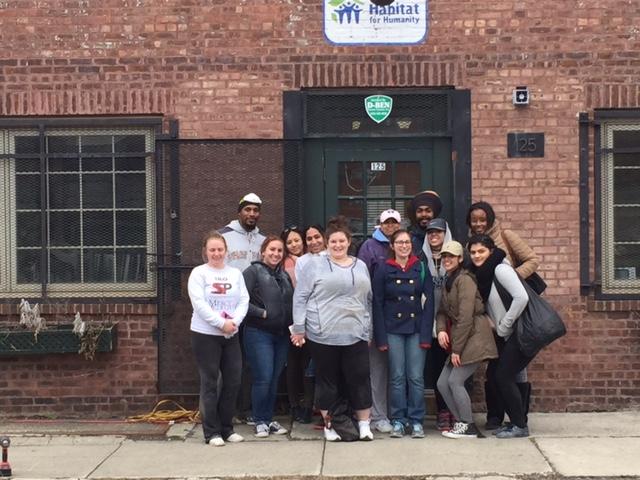 First you hear the gods fighting in the sky, then the loser’s tears drop to Earth like pebbles fast and hard. Naturally, the first thought is to run for shelter inside of your home.

But what if you had no home? What if you couldn’t afford shelter? What if the rain came down, the cold wind smacked you in the face and you had to endure the frozen elements with soaked clothing.

Now imagine you don’t have enough money for yourself but now you must find a way to provide, along with keep alive your precious child. There are many people still struggling with these issues today. A whopping amount of people still sleep in New York City homeless shelters today. Homelessness in New York has recently reached the highest level since the Great Depression in the 1930s.

The Coalition for the Homeless provides up-to-date information on New York City’s homeless population. The coalition states that in February 2016, there were 60,410 homeless people, including 14,699 homeless families with 23,783 homeless children, sleeping each night in the New York City municipal shelter system. Families comprise just over three-quarters of the homeless shelter population.

This second largest amount of homeless people living in New York would be adult male veterans. Only 8 percent of Americans can claim veteran status, however 17 percent of our homeless population is made up of veterans. New statistics include that 43 percent of the male homeless over 25 are a veteran. The number of female homeless veterans increasing gradually. The very same men and women who risked their lives to protect the people of their country are now living in their country’s streets. About 53 percent of individual homeless veterans have disabilities, compared with 41 percent of homeless non-veteran individuals. It becomes less likely for disabled people to find jobs due to a lack of ability and physical pain.

Research has shown that’s the main reason for homeless families seem to be a lack of affordable housing. With the amount of homeless people increasing and rates going up by 92 percent then last year, what can we do to help?

Organizations like habit from humanity are coming up with plans for just that. Habit for humanity try to help those same people with providing affordable housing. We may be fine now but there is no way of knowing what the future holds for us. It’s important to help while you can so you can be helped in return. The members of Habitat for humanity are builders. They build because they believe that everyone, everywhere should have a healthy, affordable place to call home. They do more than just build a home. They build communities along with hope and opportunities for families to help themselves. They take donations that help families break the cycle of poverty. They help people build long- term financial security. They proved affordable, stable home so families have more money to spend on food, medicine, childcare, education and other essentials. The generosity of other, along with helping hands and support allows Habitat to build more and help change the lives of more than 5 million people around the world.

The driving focus behind Habitat for Humanity is a vision of a world where everyone has a decent place to live. They do this by putting God’s love into action by bring people together to build homes, communities and hopes. Habitat for Humanity International was founded in 1976 by Millard and Linda Fuller. This organization stands proudly addressing the issues of poverty housing. Habitat for Humanity grew stronger with the help of Koinonia Farm a small, interracial, Christian community outside of Americus, Georgia. The Fullers first visited Koinonia in 1965. The Fullers had left the successful business world to start a new adventure living a Christian service lifestyle. They rebuilt the community of Koinonia Farm. In 1968, Koinonia laid out 42 half-acre house sites with four acres reserved as a community park and recreational area. They developed the concept of “partnership housing” The idea centered on those in need of adequate shelter working side by side with volunteers to build simple, decent houses. That started a string of good deeds. The Fullers stayed with the idea and homes were built and sold to families in need at no profit and no interest. The basic model of Habitat for Humanity had begun. In September 1976, Millard and Linda called together a group of supporters to discuss the future of their dream. Habitat for Humanity International as an organization was born at this meeting.

But where do they get the funds for these houses? The houses are built at no profit and interest would not be charged on the loans. Building cost are financed by revolving fund called “The fund for Humanity.” This money comes from new homeowner’s house payments, no-interest loans provided by supporters and money earned by fund-raising activities. The money in the fund for humanity is only used to build more houses.

Habitat hasn’t changed much since 1976 beside the fact that they have more than 1,400 local affiliates in the United States and more than 70 national organizations around the world. They still keep the many goal and principal the Fuller family laid out helping thousands of low-income families find new hope in the form of affordable housing.

Mercy college students who are no shy to any good deed, Student Support Services Project (SSSP) teamed up with Habitat for Humanity- Community Day of Service. Although a small group mercy students left a big impact on the family who will have an opportunity to move into a renovated house. Students who participated include Alexa M, Mekelzum W, Gabrielle R, Garren B, Kaitlin S, Crystal V, Sara S, Sarina G and myself. To me this was one of the most rewarding trips, I’ve been on and it happened to be something I’d never think I’d be doing.

We departed April 8th from Dobbs Ferry campus at 7:15am. We were told to dress comfortably as we will be performing work like painting. However we never painted. As I stepped off the bus the freezing tickle reminded me just how important it is to give my time and help. As the snow hit the ground I could only imagine how these courageous homeless people deal with this weather. I realized I have been blessed with a home and a warm cozy bed to sleep in every night, so I must help if I can. As I helped that day I learned something about myself, I have the power to demolish and rebuild. Habitat for humanity takes cheap unwanted building and makes them homes. They take the bad and make it good and I will volunteer my time again to join amazing people who truly care for humans.

Upon arrival, we entered a ghost town. The town happened to have nothing but broken down remainders of what once was homes. Habitats goal is to slowly buy the block and renovate each home to change the community in time. 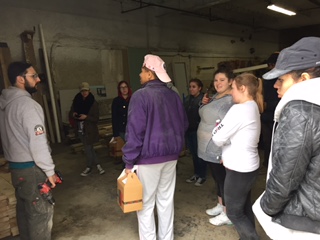 We split into groups, where a construction man informed us on different tasks we could do to help for the next few hours. We were the demolition crew. The demolition crew’s job is to destroy, tear down on purpose a building to start fresh and build something new. Every student got a hard hat, safety glasses and gloves. Then we were told to grab a tool. There were buckets of hammers, sledgehammer, and claw bars. Naturally I grabbed the sledgehammer and hacked away all my aggression. Boom! Bam! Crack! I started to breaking down plaster walls. I stood on latters pulling off wood pillers down. Dust nails and sweat everywhere. All the demolition we caused, was followed by us pick up plaster pieces and wood than put into buckets that we sent down by hooking them up to ropes. The buckets where met by someone in the backyard, who grabbed the buck it and tossed it into the trash. I had plaster in the cracks of my ears, dust particles in the corner of my teeth and eyes. My shoulders were sore, I was sweaty and cold but it still was the most rewarding feeling. I worked so hard that day and to know that I could help a family have a nice home kept a smile on my face. After lunch we went on a tour of the facility and saw the community they had build. It was beautiful compare to the houses on the houses on the block were we had gotten to demolish a building. I would love to help Habitat at again it was a great time and other students agreed.

Kaitlin Silliman, Health science Pre PA, junior a member of SSSP signed up for the trip because she wanted to help an organization that helps people who are less fortunate or have financial instability. It was her first time volunteering for Habitat for Humanity and she would enjoy doing it again. She had never worked so hard, it wasn’t something she was use to but it was fun and she was thankful for the experience.

“My favorite part was knowing I helped someone’s dream of owning a home come true. I also loved the rewarding feeling at the end of the day.” Said Silliman

As you can see mercy college students have a big heart and want to help out. If you would like to join SSSP to contribute to more trips like Habitat for Humanity, you can contact David Collins, Director at [email protected] (914) 674-7239. Also if you would like to volunteer your time, donate or want more information on Low income housing you can contact Habitat for Humanity customer service at 1(800) 422-4828 or visit the website at www.habitat.org/‎

Remember that homeless people are still people and you never know how lucky you are till you aren’t so lucky anymore. Next time your walking past someone who ask you for money or you see someone sleeping on the street, think twice about judging and more about why and how they got to this point.