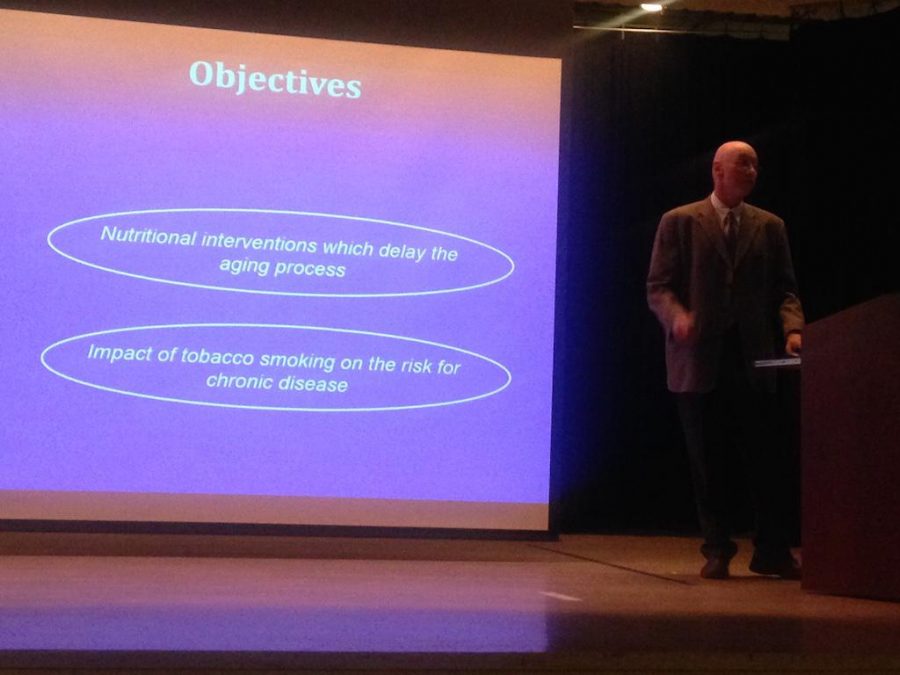 The moment you take your first breath, you’re doomed. The process oxygen goes through within your body is exposing it to an aging agent. What does that mean, you may ask? That means the oxygen you breathe is slowing introducing your body to wrinkles and grey hair. But don’t hold your breath because there is a way to stop this!

On April 20, the school invited Dr. John P. Richie, professor of Public Health Science at Penn State. His objectives for the visit: to educate the school on what can delay and prevent the aging process, as well as how tobacco is related to chronic disease. He first defined aging and described it in humans, telling the group present that aging was “species related,” and that it differs with different animals. For humans, the average life is around 80 years and the max life is 120 years old. Within the time between birth and death, through natural causes, a healthy human will ultimately become unfit. But why does this happen?

To fully understand this, the scientists Richie first worked with, over 50 years ago, had to look at the smallest part of the human anatomy and then work their way out. So they looked at cellular aging. A cell can divide and make a whole new youthful cell about 50 times before cell division stops. That means that after 50 divides, cells become more vulnerable to breaking, stress, and death. One process Richie highlighted in his talk was something called oxidative stress.

“Oxidative stress is the increase of oxidation exposure to the cells.”

In layman’s terms, a cell is too exposed to oxygen. Richie continued by saying that your vulnerable cells can also be introduced to a “free radical.” That is a cell that is very reactive and looking for something to partner with. If the free radical is introduced to something that it cannot pair with, it can cause serious damage. Now what do oxygen and free radicals have in common?

When one inhales oxygen, it is changed from the oxygen one breaths into water. Now, while cells are equipped for this process, a cell called “super oxide,” escapes. This cell doesn’t escape the cells much, but when it does, it is highly reactive and exposes cells to a large amount of oxygen. While people don’t feel the effects right away, a small dose of this super oxide over time changes the cellular makeup. It causes people to age as well as cause cancers in some people, he says. While oxygen is the life source for humans and other animals, aging does have to be the source of death. Fortunately, Richie and his team are working on something that can delay or even prevent this aging process.

He and his team looked at two different ways to reduce the affects of aging. One discovery they uncovered in their studies was that the amount of antioxidants within a cell was significantly different between a younger cell and an older cell. Antioxidants help to keep from being oxidized, and if a cell doesn’t go through oxidative stress, its safe from age. As the cells divides and ultimately stop dividing, the antioxidants become broken. So the more of this molecule one intakes, the better the chances are of slowing down the aging process.

Richie also spoke of two tests he and his team did. They tested two types of diets on mice. To put in perspective the gap between mice and humans, the minimum life span of a mouse is two, the max being three years old. The first method of aging reduction to the mice was the very common method of limited calorie intake. This produced much smaller mice both in width and length. However, life spa 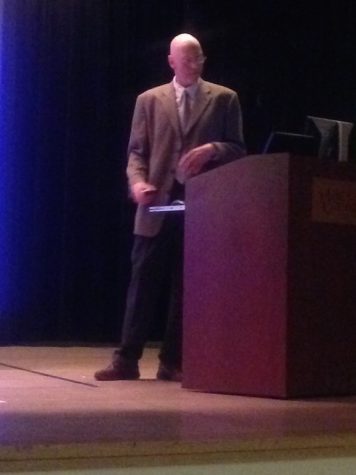 n for these mice increased from 2-3 years to 4-5 years. They also noticed that the cancers that occur within the process of aging occur much later in the mice’s life. They then looked into a diet where they limited the amount of methionine.

Methionine is what the body uses to make protein. When limited in the mice, the same results from the calorie diet occurred. The mice were smaller and their life span increased, as well as the delayed development of cancers within the mice. When this method was given to human test subjects, the groups were cross-examined and given a vegetarian diet. The results that were displayed in the mice also were displayed in the humans. Dr. Richie then moved on to environmental aspects of aging.
Now while most know that cigarette and tobacco related products cause cancers and other diseases, he spoke about heavy tobacco use. He stated that tobacco is one of the environmental aspects that a human needs to stay away from to avoid aging and disease, along with liquor, infection and obesity.

Moral of the story: listen to your Dr. Richie: eat right, exercise, don’t smoke, don’t drink too much and get your vaccinations. But most importantly, don’t stress over oxidation.