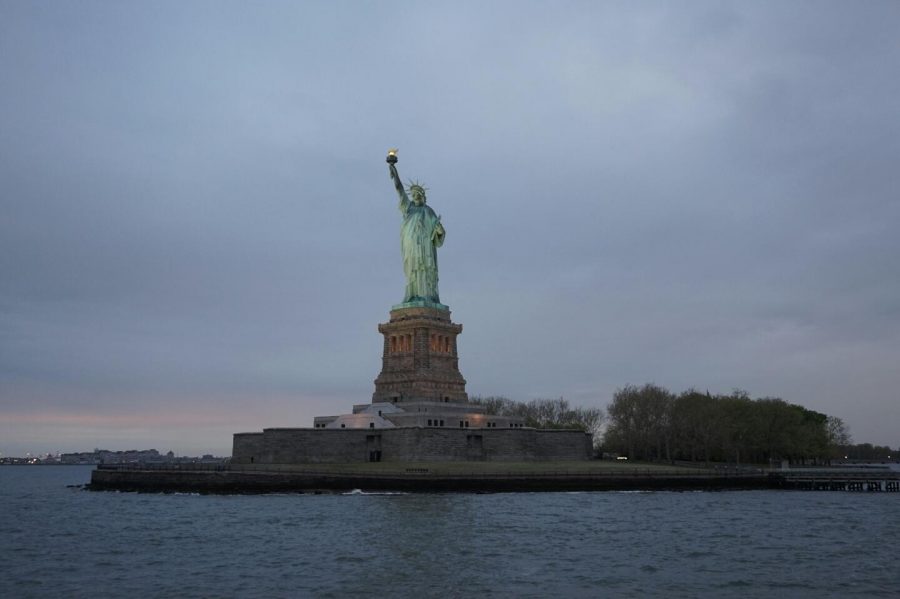 New York shows off its beautiful night view and its skyline. There are so many beautiful and symbolic buildings such as the Empire State Building, the Chrysler Building, and Rockefeller Center. However, nothing can be a better symbol of New York than the Statue of Liberty. She is not only gorgeous but also a symbol of New York. Also, the Statue of Liberty represents the spirit of America, liberty.

She looks even more gorgeous if seen at night.

On April 29, Mercy students joined the One to World’s Twilight Cruise. Sponsored by the Mercy student government, Mercy students left school together around 4 p.m. As Mercy students walked along 42nd Street from Grand Central for half an hour, they arrived at Pier 83 as the One to World’s Twilight Cruise was waiting for them. Since Mercy students arrived there early, they were the first one on the line. As departure time came, the crews started checking the I.D. cards and the belongings. They gave a green paper bracelet to people over 21 to distinguish them from the underage, so that they can sell alcohol only to those over 21. In this way, the crews could sell beer and cocktail in the cruise without a long line. They also checked the belongings to confirm that passengers had no food or drinks.

Twilight Cruise was a really well attended cruise, and a second floor cruise. It accommodated around 600 people. On the first floor was a food court. It was not big, but it sold hot dogs, burgers, and drinks. A lot of seats were available too. Since it started raining when we were on the cruise, many people enjoyed sightseeing inside sitting on those chairs.

The second floor was divided into two parts. One was an inside hall and a bar and the other was an outside deck and a bar. The DJ made music joyful and loud, so people danced and enjoyed the music. However, people in the hall came outside whenever the famous buildings or island were near.

A Mercy student, who is from Japan, Taketo Oshio, said “Even though the weather was not good, the cruise was amazing. We could enjoy a great music and night view. The point I liked most is everyone can enjoy their cruise in their way. You can have a seat and also keep dancing on the floor.”

Since it rained, students couldn’t enjoy the outside deck a lot. However, they just went out in the rain when beautiful skylines came and also, the inside view was enough. Both on the first and second floors, the windows were big and clean enough to see the outside view clearly. On the second floor, with the DJ playing music, a lot of people were dancing with that music. Some Mercy students also enjoyed this music party too. Taketo seems impressed because nobody forced him to dance or to sit. They could enjoy what they wanted to.

The Twilight Cruise departed at 7 p.m. and it traveled all the way around Manhattan. This cruise ran for three hours, so people could take their time sightseeing. When the cruise departed, it was not dark. When the cruise went near the Statue of Liberty, the darkness was not enough to maximize its beauty. It was not a night view at first. However, this cruise was not just a one way cruise. It went all the way to the opposite side of Manhattan and came back through the same path. When the cruise was on the way back to Pier 83, it was in dark, so people could enjoy the night view of New York. As a result, Mercy students could enjoy both the day view and the night view on the same cruise. When they were coming back, the Statue of Liberty was holding glittering light in the dark.

In addition to the Statue of Liberty, Twilight Cruise looked around a lot of beautiful places such as the World Trade Center, Coney Island, and the Brooklyn Bridge. Also, the overall night skyline view of the Manhattan was beautiful.

The cruise showed people the most beautiful and twinkling city view. However, the city view was not the only one we could enjoy. People were the most interesting part of this cruise. Twilight Cruise invited international people from a variety of countries, so people were willing to talk with new people and make new friends. Mercy students also enjoyed talking with people from other countries and making new friends. Meeting a lot of people from a variety of countries is an interesting experience. Students started sharing their stories and they talked about what they were enjoying at the time. It was also interesting to guess where they were from. Even though some were from New York or New Jersey, which is nearby, most of the people came from somewhere really different and far away such as Asia and Europe.

One of the Mercy students, who is from Korea, Yool Yang, said, “I had an unforgettable experience with my friends seeing beautiful views from ferry ride and it was such an exuberant event before the final exam.” He met new friends and enjoyed a lot. For many Mercy students, ferry ride views were wonderful. Over 20 Mercy students all enjoyed the skyline in Manhattan. Ten days before the semester is over, they seemed to have fun on the cruise.

Most Mercy students enjoyed and loved this cruise. However, some students were cold  since the cruise ran for three hours,. They took a rest sitting on the first floor. Even though it was not the perfect cruise for all students, they said they enjoyed the night view of the city. This cruise was a good way to wrap up the semester and it was a great opportunity for international students to meet a variety of people from different countries.