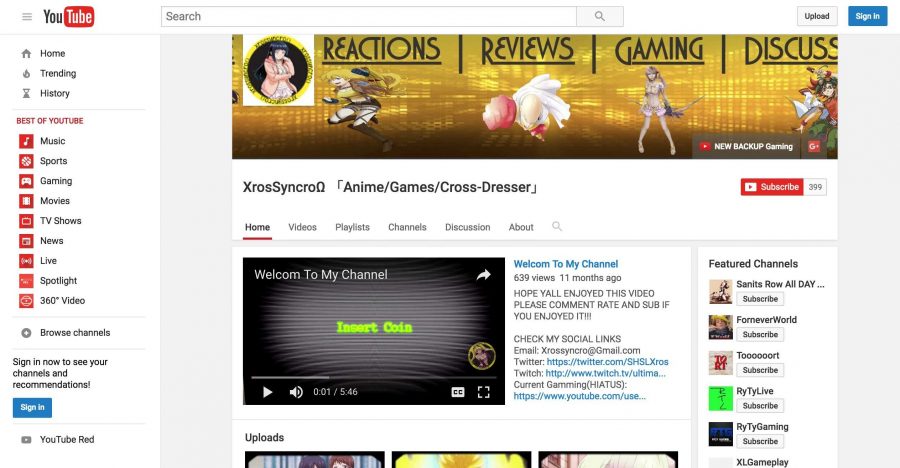 YouTube has changed the world’s online viewing recently. It allows viewers to see different videos from “how to” to “live streaming.”

YouTube was founded in 2005 and is currently the leader in online videos. Google eventually bought YouTube in 2006 for $1.65 billion. This website allows people to watch and share online. YouTube can be accessed online and on mobile devices. Everyday there is always a new video to posted by a creator or their known as, being a YouTuber.

According to YouTube, “they have over a billion users and every day people watch hundreds of millions of hours on YouTube and generate billions of views. YouTube overall, and even on mobile alone, reaches more 18-34 and 18-49 year-olds than any cable network in the U.S.”

It allowed a student who was inspired by his favorite YouTuber to create his own channel. Tyishawn Boyd, a student at Mercy College, channel is entitled, XrossyncroHD. “After watching channels like Danq8000 and Forneverworld, it allowed me to start creating content,” he says.

Currently on his channel, he talks about anime and video games.

Tyishawn has 399 subscribers but he still pushes weekly to create content for his viewers to see. At the moment, he has 434,483 views. Tyishawn wants his voice to be heard and what better way to do it by having a channel where people are into his content with similar interests.

YouTube recently put in effect their ad inappropriate content policy where it states, “Content that is considered “not advertiser-friendly” includes, but is not limited to: Sexually suggestive content, including partial nudity and sexual humor, violence, including display of serious injury and events related to violent extremism, inappropriate language, including harassment, profanity and vulgar language, promotion of drugs and regulated substances, including selling, use and abuse of such items, controversial or sensitive subjects and events, including subjects related to war, political conflicts, natural disasters and tragedies, even if graphic imagery is not shown.”

After the policy was initiated, social media was outraged, especially the creators. The hashtag on Twitter, #YouTubeisoverparty was trending worldwide. A popular YouTuber named, Philip DeFranco in his viral video entitled, “YouTube Is Shutting Down My Channel and I’m Not Sure What To Do,” voiced his opinion where he expressed his irritation towards “violating the new terms of service.” In this video he discusses that by demonetizing videos is a form of censorship. Monetizing is where a YouTuber or creator inserting ads in their video to make revenue off of it.

When disabling advertisements, creators are not able to make money off of their content. Tyishawn says, “in the future and if they use the system for to completely censored people which is a horrible thing because then the creators are going to start lowering their content.” This actually does impact the bigger channels with 10,000+ subscribers, “so far this does not impact myself but if I were a bigger channel, it would’ve impacted myself.”

To those channels that have over 100,000 are impacted since the policy suggests that these channels would have to change their style which would have to become a “family friendly” channel. “Lately channels have had to censor their cursing to fit into the new terms of YouTube,” Tyishawn says.

The future of YouTube’s advertising policy is not clear as yet. Tyishawn says, “at the moment, YouTube should continue becoming successful. In my opinion, YouTube is becoming for popular than TV which is why advertisers are going to this platform to place their ads in-between videos than placing them on TV.”

Those that are trying to start up a channel, it is challenging. A few tips on how to start up ones channel is, “make sure that you have good equipment (ex. camera, lighting, software, and mic), try to be creative as possible, be patient and reply to comments,” adds Tyishawn.