Trump and Clinton Square Off During First Debate 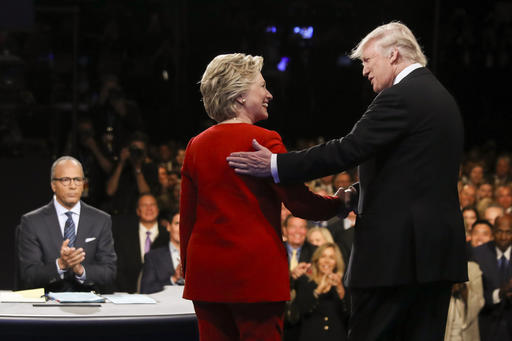 Hillary Clinton and Donald Trump went against each other for the first time in one of the most awaited Presidential debate ever. Both candidates were faced with difficult questions and traded harsh but intellectual attacks from each other. The debate took place at Hofstra University and was moderated by NBC Nightly News anchor, Lester Holt.

Former Secretary of State and Democratic Nominee, Hillary Clinton, took a break from the campaign trail and had prepared herself for this event as she was “preparing to be President.” While his opponent, successful business mogul and Republican nominee, Donald J. Trump, was different and continued his campaign trail until the day of the debate.

Ladies first. Clinton started of the 90 minute debate of being asked on how she will create better paying jobs and improve economic growth for Americans.

Clinton stated that she will invest in creating jobs in infrastructure, increasing the national minimum wage and a equal pay for women in the working field.

Trump thinks differently. He tackled the jobs and big name companies that are fleeing this country and into other countries, Mexico and China specifically. He plans on ending this by reducing taxes to 15 percent for small or big businesses and to improve trade deals, which will lead to more jobs in the U.S.

Clinton responds back and throws the first jab to Trump’s tax cut plan and refers it as “Trumped up trickle down.” Then she criticized his fortunate life of starting a huge business while her dad, a small businessman, worked hard everyday for his earnings.

Trump defended himself by accusing of Clinton, as a politician for a long time, on not improving job growth anytime soon.

Throughout the debate accusations and jabs were exchange from one another. It was time to fight and defend.

Clinton reminded the voters that Trump has been insulting women in the working field and especially in their appearance. She goes on to accuse Trump on calling Alicia Machado, Miss Universe of 1996, Miss Piggy due to her weight. Trump also made a racial comment by calling the former Miss Universe, Miss Housekeeping, because she is a Latina.

Trump is astounded on the truth of the accusations and questions Clinton’s sources multiple of times. Clinton ignores and continues to say the Machado just became a U.S. citizen and reminds him that she will definitely be voting.

Holten brought up race into the debate and both candidates has had their bad times in this category, specifically towards black people. Trump dug up into Clinton’s past by reminding the black voters that she had called the African-American youth “super predators” during Bill Clinton’s presidency.

Clinton did not hold back. She went on to say that Trump was sued at one point for racial discrimination because he would not rent apartment to African-Americans. Not once but twice.

Holt questioned Trump on his taxes and if he will ever expose his tax returns to the public. Trump then made a deal that he will release his tax returns if Clinton will reveal her archive of deleted personal emails that was once used on a private email server.

Clinton stood there as the crowd applauded for Trump. She then continued to state that Trump may have paid nothing in federal income tax. If Trump has paid nothing then the troops, vets, and schools will get nothing.

Mercy College students were part of the high ranking viewers of the debate. Students were waiting eagerly, in Hudson Hall, for the highly anticipated debate between a first female presidential nominee and a reality TV star and businessman to go head to head.

Smith Brickner, finance major, joined the millions of viewers. Brickner stated that it was the most important debate since the 1980 presidential debate between Ronald Reagan and Jimmy Carter. He believes that the recession from the ’80s is still going on in the United States. Brickner strongly feels that one should watch the presidential debates over the next few weeks.

“The person in the office is going have a huge impact on the future. That next President will negotiate future trade deals and decides on whether to deport your immigrant neighbor or not. Not to watch the last few debates and not do your research about them is foolish.”

One Vet Tech major, Emily Nanzo, did not watch the debate because she had class during the time. Nonetheless, Nanzo would not have watched it even if she was free. She feels neither candidates are suited enough to be presidents.

“I’m not going to vote for either of them,” Nanzo said. “Instead I’ll be voting for the Libertarian Party, Gary Johnson. Johnson will help us out a lot more than Trump or Clinton.”

Ferrah Jean, therapy major, wasn’t part of the high number viewers that watched the debate. Jean did not watch it because she strongly believes both Trump and Clinton are liars. The next two debates won’t change her mind or feelings towards them.

“If I could I wouldn’t vote for anybody but Clinton’s past experience in the political office somewhat qualifies her to be President.”

History major, Michael Pummins, was stunned how Holt lacked the ability of keeping the two candidates under control. Nonetheless, it’s important to watch these final debates. Pummins understands the voters dislikes of choices for President but it’s important to be active in the final debates and on Election Day upcoming November.

“When the time come to vote, you need to know who and why you’re voting for. You have a chance to say something. People need to listen and be involved. It is the ethical thing to do.”