The VP Debate: Mike Pence Won for Not being Donald Trump 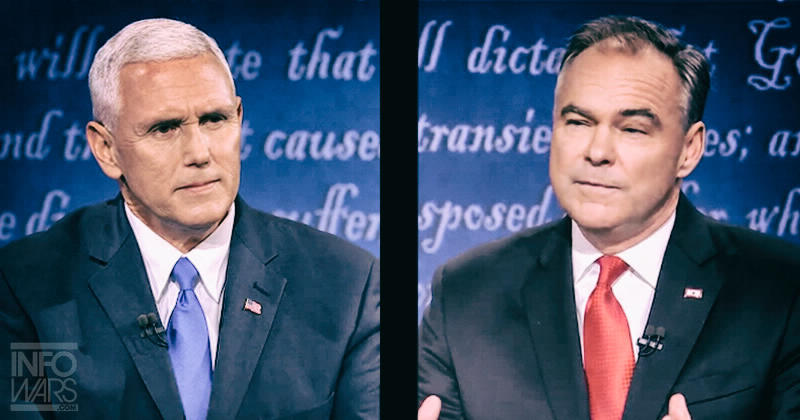 If you watched cable news this past Monday you would have never known there was a debate the next day. All the news coverage was on Donald Trump’s tax returns and the debate was pushed to the end of the news hour.

Why shouldn’t it be, considering the Hillary Clinton vs. Donald Trump Battle Royale to the Death at Hofstra University was the week prior.

Finally, the last job (and maybe the easiest) prove to the American people that they can become President should tragedy strike their running mate.

Let’s see how they did…

He looks like your standard suburban soccer dad, but Kaine certainly has the resume to be, at least, Vice President. A former mayor, governor, and currently Senator from the state of Virginia, Tim Kaine has the experience. Hillary Clinton picked Kaine for that reason and the fact he has a likeable demeanor to balance to her polarizing self. Kaine’s main job was to continue the momentum Clinton started after a successful performance in the first debate. Kaine slowed down the momentum as he became bogged down in the repeated image of moderator Elaine Quijano telling him not to interrupt. Maybe, Kaine was trying to prove he had the fighting spirit and wasn’t just the nice guy.

Kaine without a doubt defended his running mate the better than Pence. His most memorable defense was when he said he was happy to talk about the Clinton Foundation. A charitable organization that has become a symbol for the corruption Clinton is accused of. Instead of an evasive answer like Clinton usually offers, Kaine gave a direct response without a hint of fear. Kaine assisted his defense with his talk of what Clinton wants to accomplish as President.

Returning to his talk about what Clinton wants to accomplish, Kaine displayed that he does understand the issues facing Americans and was able to pivot to what a Clinton-Kaine administration would work to do. However, he continued to stray off course, at times, for repeatedly mentioning Trump’s comments about Vladmir Putin. Best seen when Quijano reminded the candidates the question was about North Korea not Russia.

How did he compare to Mike Pence?

The complex relationship between the media and politicians is something Mike Pence knows well as he has been on both sides of it during his long career in politics. Throughout the 90s, he was a radio and television talk show host in Indiana. He would represent Indiana in the House of Representatives from 2001 to 2011. He currently serves as the gGvernor of Indiana, leaving his re-election bid to be Donald Trump’s running mate. There were rumors that Trump picked Pence after being pressured by his children. For good reason, as Pence relieves Republican voters concerned that Trump is not a conservative and may not have the temperament to be President.

That relief to Republican voters was on max during the debate. Pence, while starting off a bit distant and out of the loop, quickly sprang into action. At no point in the debate did he lose his temper or fall for Kaine’s barbs. A clear undeniable contrast to Trump’s off the rails tantrum of a performance in the first debate. Whereas Trump would never move past whatever attack line Clinton threw at him. Pence presented a clear understanding of the issues, while relying on his experience as a TV and radio host to keep a consistent calm tone and demeanor. He talked about the Clinton Foundation, which Trump never did at the first debate.

However, Pence still left his running mate to fend for himself. Kaine asked directly how can Pence defend Trump’s past statements and actions. During the debate, Pence having forgot who he was running with. Him deciding to trade defending Trump, for attacking Clinton and offering a conservative version of Trump’s proposed ideas.

When pressed about the Trump Foundation, which the same day as the debate the New York Attorney General ordered to cease fundraising activities as it’s being investigated, offered only a 15 second frenzied response. Pence failed the first rule of being a Vice Presidential nominee: ALWAYS DEFEND your running mate.

The CNN Instant Poll immediately following the debate showed voters who watched the debate gave Pence a slim margin of victory 48-42%. In this person’s opinion, because Pence was such a contrast to Donald Trump and was never once questioned by Kaine on some of his controversial acts as Governor of Indiana (ex. The 2015 religious freedom law and his proposed state-run news outlet). Meanwhile, Kaine was constantly interrupting and would not shut up about Vladimir Putin. Pence was calm, never lost his temper and without a doubt is a conservative Republican. He basically won not being Donald Trump. Kaine defended Clinton and communicated their proposed solutions, but it wasn’t enough to overcome the contrast between Trump and Pence.

But, what about the final question of if Tim Kaine or Mike Pence is qualified to be the President?

Well we could have probably skipped the whole debate for that question. As the entire CNN focus group of undecided Virginia voters all said yes to wishing it was Tim Kaine and Mike Pence who were running for President.

Hey Tim, Mike? Have either of you given any thought to 2020? I think you both just got your first endorsements.

Matt can be reached at @Matt_Reich7