The Future of Textbook Renting on Amazon 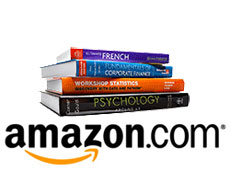 Amazon’s future is changing into the past norms of businesses. Businesses have transitioned from physical to online with some businesses maintaining both components together. Unlike these businesses, Amazon is transitioning from online to physical.

For college students, they would go very far to be able to rent a textbook and still save money. There are some who attend college close to home and others who attend college away at a place they might not be familiar with. Depending on their financial and environmental situation, they rent online or in-store.

For Biology juniors, Christina Jackson and Ian Ramdat, textbook renting has been a rollercoaster ride, especially renting from Amazon.

“It was good. I wanted to rent there. There are so many options. Psychology, Microbiology I bought, Pre-Calculus and Speech. The only thing is I hate paying for the shipping costs,” said Jackson.

“I bought my Chemistry textbook for two semesters. I compare it to different books,” said Ramdat as he revealed the organic chemistry book that was not required for his class. “I bought this one to help me,” he added.

According to American Booksellers Association, the number of bookstores here in the United States declined to about 1,400 bookstores in 2009 and then, rose to more the 2,200 in 2015. This statistic was reflected by the opening of the first Amazon Books located in University Village in Seattle, reinforcing Amazon’s original mission that had changed the way people purchased books and other items.

“If you ship it to the store, then you go pick it up. If you can’t get it where you live,” Ramdat said as he recalls a bad experience with Amazon shipping. His package was delivered to a UPS store and had difficulty claiming his package over there. “The package was under my name and my parents’ address. They can only give you the package if the name and address matches the person picking up the package.”

Theres problems when you try to order online, some say. “I try to manage my way. I rented through someone. I don’t have Amazon Prime. I’m the kind of person who likes to see things in person,” said an anonymous student who rented her English textbook during her first semester at Mercy College.

Stony Brook University announced a partnership with Amazon this summer marking changes in the campus bookstore.

“It was hard for her to buy books because it is a set price for the college. Three weeks into the semester and still no books. It’s so stressful,” said Jackson describing her friend’s experience at the university.

Just like Stony Brook University, Mercy College students can purchase books through a specific webpage and sometimes have it delivered to campus. The only difference is that Mercy College is partnered with eFollett.

“We have to buy lab books here,” added Jackson. Then, there are others who are not so fortunate like the anonymous student as she states, “I haven’t had the privilege to rent because they didn’t have anymore.”

When people have the advantage of renting textbooks online, they get the paperback ones delivered to them by mail and then, there are the e-books. E-books or electronic books are books that are read on the computer, tablet or any other device.

She has a rather harsh reaction to the digital technology.

“I find it hard to sit there and read off a computer screen for hours,” added Ramdat.

With so many cons about e-books, college students may consider purchasing books at a physical store. It could start pulling away from online bookstores such as Chegg and Valore Books. The nearby Barnes and Nobles is the place to go for now.

Jackson and Ramdat rent and buy books from different places including Amazon. Jackson herself normally rents from Chegg, but has rented from Amazon and Valore Books before transferring from Orange County Community College. Valore Books is where people can save up to 90 percent when renting or buying books. Those who buy them can sell them back through the website. The variety of subjects Valore Books offers is the reason Jackson prefers renting from there before renting from Amazon.

On the other hand, Ramdat digs further deep when approaching a new semester. “Wait until classes start. Check every site possible. You will look dumb if you buy on Amazon for $40 while it is $32 on Chegg,” he suggests to future college students.

As students are taking into consideration about where to rent book and save money, the books available in Amazon Books are being chosen based on online customer reviews and sales data. This will give students the opportunity to learn new tactics and compare books. Ramdat favors the idea of Amazon Books coming to New York City. “Definitely, if the prices are good. You go, find a textbook and go buy it. If they don’t have it, buy it at the front. Order it and pick it up later. They don’t have to go through the post office.”

Jackson added, “Tourists just love anything. Prices will be inflated in New York City. If it is up here in Hudson Valley, then the prices would be better.”

Whether it is Chegg or Amazon, college students want to save money when renting books. They already have to learn to invest in college education in order to avoid so much debt after they graduate. When Amazon Books opens in late 2018 or early 2019, those attending college by that time will not have to worry about shipping costs and long waits.