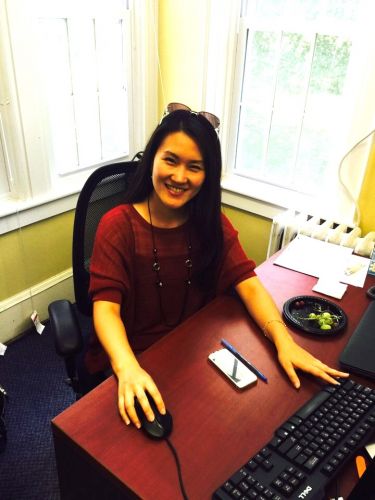 For Dr. Jeehee Sung, a Health Psychology professor at Mercy College, she keeps in mind that students need to be disciplined regarding cellphone use in her classes. “I set up a rule. No cell phone use. A lot of professors prefer not getting interrupted,” she said.

Some students don’t use cellphones in the classroom, but don’t put them on silent or vibrate either. Dr. Sung makes students sing when their cellphones ring in class.

On the first day of the semester, a student’s cellphone rings in class. She shuts off her phone and Dr. Sung didn’t continue the class until that student sang. It turned out that it didn’t necessarily have to be that student who had to sing. It could have been anyone in the class as long as someone had to sing in order for the class to continue. Nobody attempted to sing, so there came a long pause. Another student took out his phone and played the first ten seconds of the YouTube video of one of his favorite songs. Dr. Sung only allowed that just for that first day. Everyone knew they had to be ready hoping that there would be no next time.

“She was very shy. Other students helped her out,” she recalled about that day.

Graduate student and Psychology tutor, Terrence Calistro reacted to this discipline. He said, “This is mostly related to operant conditioning. It is more of a motivation to remember to shut off your phone before class by adding punishment.”

“An example would be giving a child money every time he does well on a test,” Calistro added as he continued to explain operant conditioning.

“I don’t want to reinforce and I don’t want to punish them,” Sung mentioned as she recalled an incident of cellphone use that occurred when she first started teaching. “I walked to that student and put that person on the spot.”

That was when Sung realized she needed a different method to discipline students concerning cellphone use. “I Googled and asked other colleagues. I connect the dots and develop the ideas.”

Depending on the school, educators need support from administration when establishing their own cellphone use policy. Then, as always, they have to address the policy when classes begin and keep reminding students about the policy. Educators realize that cellphones have a negative impact on learning because students look at their cellphones when they ring or vibrate.

Then, there are other schools where policies are not strictly enforced and follow the “don’t ask, don’t tell” code. Educators allow students to use their cellphones in class as long as it doesn’t distract fellow classmates. Students are allowed to use cellphones for research, note-taking and calculating math problems.

“I don’t want to ignore process or dynamics because everyone can hear it. I use it in a positive way. It is not like the text sound where some students hear that, some students don’t,” Sung specified about her discipline.

One of her students who asked to remain anonymous reacted, “I thought it was funny. I don’t know how, but I just find it funny. That doesn’t make somebody stop using their cellphone.”

A recent study shows that about 30 percent of students use electronic devices without distraction, more than 25 percent use them by choice, about 13 percent claimed that the benefits of using devices for non-class purposes outweighed the distractions they cause in the classroom and more than 11 percent couldn’t stop themselves from using their devices. Students spend 20 percent of their classroom time using their devices for texting, research, social media and playing games. That is about 15 to 30 minutes depending on the length of the class.

The anonymous social work major senior, who is a senior, went through a similar experience in another class. “I had a teacher gave me an absent because my cellphone went off,” he said.

It is common for discipline to be established in schools regarding cellphone use, but establishing discipline at home or work has been an increasing debate. More people have become dependent on cellphones and other electronic devices.

“In middle and high school, there were no cellphones. When I was in college, I haven’t seen anyone use their cellphone in class and that was about 10 years ago. I think discipline is strict. I was surprised by cellphone use in America,”  Sung said as she compares cellphone use here to cellphone use in her native Korea.

Sung has had experiences where cellphone use has been a method of control, even when it seemed like a distraction.

“I had a graduate student who brought her four-year-old son. She couldn’t find a babysitter. She gave him her cellphone to play with. There were about five or six students in the class, a spacious class in the Bronx campus. He sat in the back,” she said.

Then, Sung recalled on a more personal note, “My nephew uses cellphone to watch movies and games. My sister and brother-in-law are strict with cellphone use. He could play video games when he finished his homework.”

Based on these experiences, Sung suggests, “For young children, it’s not a good idea. It limits activity level in early age. I prefer using devices at a later age.”

“You’re conditioning a response to a person. Every time someone reacts to something in a specific or natural way, you add a variable that reminds them of the experience. Every time they are around a familiar variable or something similar to it, they react in a specific way as the first time it happened,” generalized Calistro about discipline.

Another study shows that 88 percent of American teens have access to a mobile phone and 73 percent of those teens have smartphones. Unlike other cellphones owned by teenagers, smartphones can be used for many things, even though they are expensive. They can use the internet, listen to music, watch videos and play games. These statistics are the reasons for debates on discipline regarding cellphone use.

“There should be no discipline. This is control. The only time there should be discipline is when there is distraction. I mean extended education after high school. When it rings, it is distracting. In general, it doesn’t matter. I use my cellphone in class as long as it is not distracting,” said the anonymous student.

“There is got to be certain discipline there. A classroom in a place for them to learn. Students don’t like rules, but it is necessary,” said Sung.

Despite Dr. Sung’s method of discipline, her anonymous student suggests to other students, “Just keep your cellphones out of sight.”

So far, Sung has had positive results from making students sing when their cellphones ring in class. A method of discipline that gets students engaged in learning will help control the increasing cellphone use in classrooms. Not only controlling cellphone use, but other electronic devices no matter if they are being used in a classroom setting, at work or home.