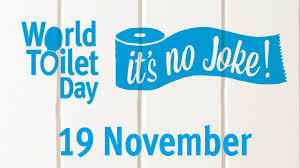 Next time when you’re sitting on the toilet, flushing your waste away and washing your hands with water and soap – just be grateful and thankful that you have easy access to a proper and functioning hygiene facility.

Because every 20 seconds a child dies from a lack of access to clean water and poor sanitation.

Toil“There are more phones in the world than toilets. Everyone has easy power on their hands yet not everyone can get to a toilet,” says Ellison.

World Toilet Day, held on Nov. 19, attempts to raise awareness about the worldwide crisis. The United Nationals developed the day in 2013 in an attempt to end world sanitation issues by 2030.

Ellison says that there are 2.5 billion people that lack access to a basic toilet. A basic toilet can be regarded as the most common flushing toilet, composting toilet or a pit latrine toilet.

For communities which don’t have a sewage system and don’t have any toilets, most practice open defecation. Much of this are being done in rural areas such as India, where 65 percent of its population are defecating out in the open.

India isn’t the only country who is lacking of unsafe water, poor sanitation and hygiene. Haiti is suffering as well. Ever since the Haiti Earthquake, they have lost their sewage system.

The people who are defecating out in the wild can get diseases like intestinal worm infections, typhoid and cholera. In fact, on Oct. 27, they were 5,000 cases and 300 deaths from cholera. On Dec. 3, the numbers of cases has increased about 92,000 and 2,000 of deaths.

Ellison explained that other than it being a sanitation concern and leading disease killer, but practicing open defecation has also caused an increase of rapes. Women are more affected by it than the men.

She added that women are more likely to use the bathroom in daylight in a big group. For those who hold their waste until the night, they fear for their life when they go out in the pitch dark while their predators await them. Women are a easier target to rape in the night while using the bathroom.

Throughout the world, many women are not allowed to use the bathroom during menstruation.

Some countries were able to change the fortunes of these terrible conditions. Ethiopia has suffered from open defecation, but are no longer suffering from it. In 1990, 92 percent of its population practiced this horrifying hygiene habit, but in 2015, it decreased to 25 percent.

Smyth explains that using the bathroom was a social gathering. In Europe, they would get rid of their human waste by yelling; “Gardez l’eau” – A warning cry meaning, “watch out for the water!” Europeans would empty their waste in the streets. Another form of getting rid of the human waste was to dump it into the river – the same river where many women would give birth in.

The Romans had invented the cloaca maxima, which prevented the streets from filling up with rainwater and human waste. Original flushing toilets were tinkered with since the late 1500s. Then a plumber named Thomas Crapper modified it in the 1880s. From here on, various of toilets were invented and were spread out throughout the world.

Both professors suggested that everyone here should take advantage of the toilet that they have at home. Contrary to popular belief, the bathroom is the cleanest room of the house.

“Staplers at the library are the dirtiest object in Mercy College. Make sure you clean your hands before and after using the stapler. Many students hands are stapling their work.”

Ellison and Smyth both indicate that there is a need and high demand for toilets, proper sewage system, and a better life for sanitation for people throughout the world.