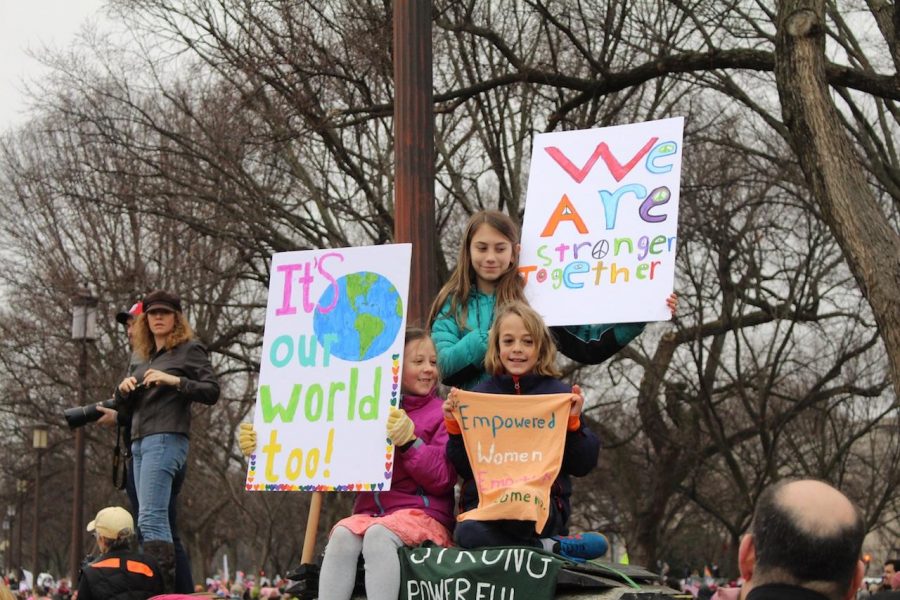 The day after Donald Trump was sworn into the White House as the 45th President, The Women’s March took place in Washington D.C. along with other cities including New York.

Though The Women’s March started out as a Facebook post, including posts around the nation, the outcome resulted in millions of people participating around the world. This march was directed towards the new president’s threats to immigrants, people with disabilities and many other coercions.

The Women’s March’s mission is: “The rhetoric of the past election cycle has insulted, demonized, and threatened many of us – immigrants of all statuses, Muslims and those of diverse religious faiths, people who identify as LGBTQIA, Native people, Black and Brown people, people with disabilities, survivors of sexual assault – and our communities are hurting and scared. We are confronted with the question of how to move forward in the face of national and international concern and fear.”

It continues on to say, “In the spirit of democracy and honoring the champions of human rights, dignity and justice who have come before us, we join in diversity to show our presence in numbers too great to ignore. The Women’s March on Washington will send a bold message to our new government on their first day in office, and to the world that women’s rights are human rights. We stand together, recognizing that defending the most marginalized among us is defending all of us. We support the advocacy and resistance movements that reflect our multiple and intersecting identities. We call on all defenders of human rights to join us. This march is the first step towards unifying our communities, grounded in new relationships, to create change from the grassroots level up. We will not rest until women have parity and equity at all levels of leadership in society. We work peacefully while recognizing there is no true peace without justice and equity for all.”

In many cities, celebrities took on a huge role in the march. In New York City, many protestors dressed their heads with pink hats. Though this march was about women empowerment, specifically against Pres. Trump, males attended it too. In the Anti-Inauguration Protest that was held in New York City, during Michael Moore’s speech along with other celebrities, he urged the protesters countless times to call out to Congress. At the Women’s March, Michael Moore did the same thing: urged the crowd to call Congress and their Senate.

Gardy Edouard, a college student, was one of the attendees at the New York City Women’s March. “We’re here marching for not only women’s rights but others that will be effected by the new President.” New York City’s Mayor, Bill de Blasio, sent out a tweet
saying, “A big thank you to the organizers and the men and women of the NYPD for keeping 400,000 New Yorkers safe during today’s #WomensMarchNYC.”

Gardy said, “Going into the march I was not sure of what to expect. I knew it was going to be a big thing. My friends were attending and I thought sure why not be a part of history.”

The New York City Women’s March began at 10:30 a.m. on Second Avenue, then continued towards Trump Tower. Though it was supposed to end at 4 p.m, the march continued for hours after.

Others were not fortunate enough to attend the Women’s March. Christina Castellanos, a former Mercy College student, was one of those people. “If I wasn’t having family issues at home, the Women’s March would have been the first place I would have gone that morning,” she said. “Attending the Women’s March would have been an important event. This event went down in history. It’s important in a sense that I along with others could have maybe made history by exercising our right of free speech and expressing our concerns. I wasn’t able to attend but the march inspired me to look into what can still be done by making small changes locally and globally and hope that this causes a ripple effect into making our opinions heard.”

If anyone wants to take part of the next march, it’s called “The Tax March,” and will take place on April 15, 2017 in New York City, Washington D.C., and if it’s anything like this last march, many other places too. You can find out more information here: Tax March.