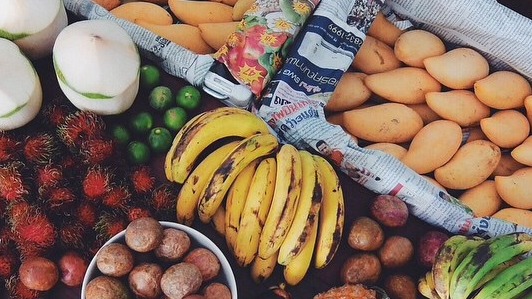 A vegan diet used to be a foreign concept for the regular American in a regular household. It was more of the lifestyle someone who decided to move to the woods and be in hiatus  of the world would adapt. However, the picture has changed over the years.

And now a change of diet may be absolutely necessary in protecting the planet from Greenhouse Emissions causing global warming, according to some experts.

Vegans now have countless food options and information available. Restaurants often have at least a vegan section and there is even vegan options for products other than food. It is fairly easy to have a full and healthy vegan lifestyle today.

But what does it mean to be vegan? And why would someone chose this lifestyle?

According to PETA, “a vegan (strict vegetarian) does not consume meat, diary products, eggs, honey or any product delivered from an animal.” This includes food, clothing, furniture, personal care and house hold items, and everything in between. Unlike a vegetarian, a vegan lifestyle goes beyond food. Every product used and/or purchases as well as any activity one takes part in, should not come from, be made out of, tested on or jeopardize an animal life.

For years, it has been assumed that diary, meat and eggs are the main sources of protein, but it turns out it is just a marketing strategy, for there are significant amounts of protein in other foods. An adult or depleting child can get all the nutrients and protein they need from a plant base diet, while maintaining good health.

According to Harvard University, vegans have a lower risk of suffering of heart disease, cancer and type 2 diabetes. It has also be proved to help with weight loss and an overall healthier lifestyle.

Another huge reason to become a vegan is living a sustainable lifestyle and helping to reduce climate change. According to the world watch institute, “Livestock and their byproducts account for at least 32,000 million tons of carbon dioxide (C02) per year, or 51 percent of all worldwide greenhouse gas emissions.

Methane, water vapor, carbon dioxide and nitrous oxide are some of the gases that contribute to the Greenhouse Effect.Many skeptics have been critical that that big environmental agencies, who exist for the protection of the one and only planet humans have, do not fully accept this theory on climate change.

Using less water and oil, recycling, being counties of energy used help as well, but the biggest impact can be made by switching to a vegan lifestyle. According to World Watch,  “Even without fossil fuels, we will exceed out 565 cigatonnes C02E limit by 2030, all from raising animals.”

Some feel that the planet has been so deeply damaged that baby steps won’t work, and a bigger change is needed to save the planet. Helping the environment is not only a choice everyone benefits from but also future generations. Regardless of nationality, humans share the same air and space. It is beyond personal choices. One’s reckless and careless choices can directly impact many others.

According to “Conspiracy” the infamous documentary on this issue, “A person who follows a vegan diet produces the equivalent of 50 percent less carbon dioxide, uses 1/11th oil, 1/12th water, 1/18th land compared to a meat eater and saves one animal’s life a day.” One person’s choices have a huge impact on the resources that could potentially be wasted on a product that is not necessary for human life or wellbeing.

The question is, can college students have a vegan lifestyle on a realistic budget?

The answer is yes, just as any other student trying to save money; it’s all about being smart with spending and money in general.

Being vegan doesn’t necessarily mean shopping at expensive organic supermarkets and spending a lot on money on food. Just be informed and learn how to read labels. It is probable that a portion of one’s diet is already vegan, so it doesn’t have to be such a drastic change.

Most restaurants offer a vegan section, and there are even entirely vegan restaurants now. There are numerous food choices.

As far as clothing and households items, it simply takes some research. Most brands now would include the word “vegan” on the packaging as well.

For residents, the cafeterias offer some vegan; options, however, are limited.

Annabella Alvarado, a Vet Tech major and a sophomore, says “I became a vegan once I realized the impact factory farming has on our environment. Mercy offers vegan/vegetarian options everyday, but what I did was change my meal plan to all dining dollars and that allows me to set up my own meals.”

There are also restaurants close to campus, like “Tomatillo” or “Mix on Main” with affordable vegan options as well, ranging from about $7 to $20. It is also easy to customize meals at restaurants to make them vegan.

Amy Morales, a Music Technology major and a senior, says “I gave up meat about two years ago just to try it out; after a month I really liked how my body felt. I feel a lot healthier now.”

Whether it is because of the health benefits, morals, or because your want to live a more sustainable life and help the planet, veganism is a life style worth considering.