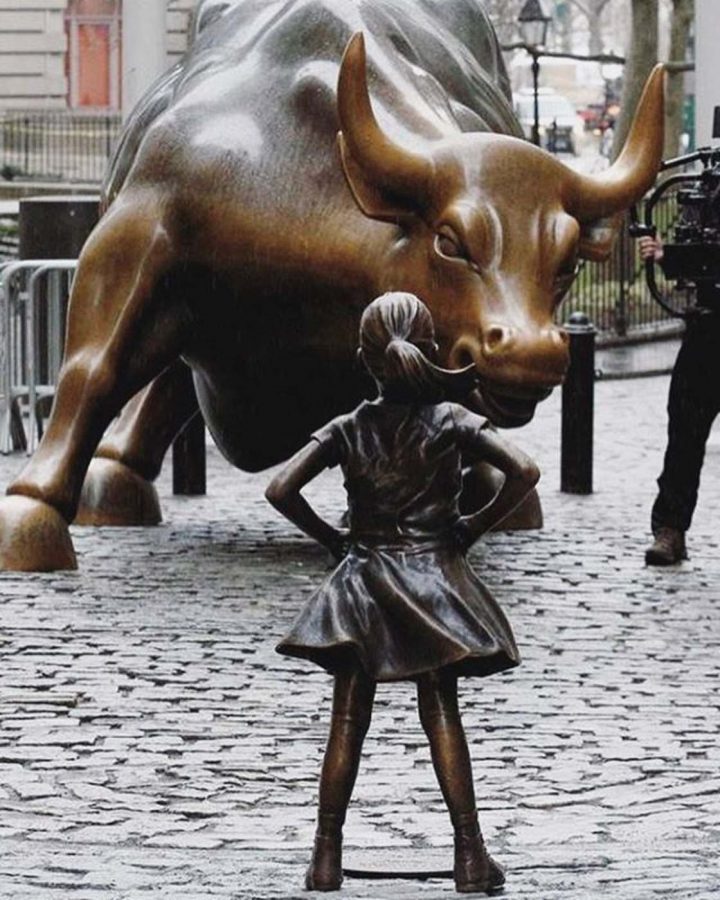 "Fearless Girl" statue standing up to the Wall Street Bull, an effort by asset management company State Street Global Advisors to encourage other companies to put more women on their boards.

In February of 1909, a group of women from the Socialist Party of America gathered in New York City to rally and call attention to the labor and voting rights of women. Less than 10 years later, women textile workers would take to the streets of Petrograd, Russia in demonstration against World War I. The first group would become known as the collective voice of what was called National Women’s Day, an event to mark an initiative for women’s rights. The second, in just a matter of days, would be given the right to vote.

Though occurring at different times and in different parts of the world, both events would ensure one thing: The roles of women were about to change.

March 8, marked International Women’s Day (IWD), is an annual observance in which people across the world gather in solidarity to celebrate past accomplishments and address the struggle for gender parity and the future of women’s rights. In 2017, IWD saw women striking and protesting, empowered in red in support of the “Day Without a Woman” campaign, and standing united to have their voices heard under this year’s IWD theme: “Be Bold for Change.”

The Mercy College Center for Global Engagement participated in this worldwide event by commemorating the advancement of women in its first International Women’s Day conference. Led by Global Engagement Director Dr. Sheila Gersh, the event brought together several professors from the different campuses within the college to speak on various topics affecting women. Each professor gave a brief presentation related to their field of study which addressed how women have made significant strides, but yet where work still needs to be done to achieve equality.

In the Dobbs Ferry Lecture hall, Gersh began the event with a brief history on International Woman’s Day, which was first celebrated by the United Nations in 1975. In addition to the protests of 1909 in New York City and those in Russia in 1917, IWD’s roots can also be found in the establishment of Women’s Day at the Socialist International Conference in Denmark in 1910. March 8 would be designated as the official date of IWD, specifically because it was a day used for protests against the war in 1914 and in 1917 on the Gregorian Calendar. It coincided with the last Sunday in February on which the textile workers in Russia came together in protest for “Bread and Peace.”

Following a brief introduction from the Office of the Provost on Mercy’s history as a women’s college, the first to present was Dr. Miriam Ford from the School of Health and Natural Sciences. Ford addressed the topic of health issues around the world and the importance of “building community regardless of your gender identity.” Her work has included participating in service projects in Guatemala and Haiti. She discussed her service with Kay Lasante, a clinic in Haiti which employs women in the community to treat those who do not have access to healthcare.

“All staff members are given enough to support their families, and the clinic has put a few women through nursing schools,” said Ford. She encourages everyone to find their passion. “Get involved and make a change.”

Dr. Shari Berkowitz, also from the School of Health and Natural Sciences, continued to look at healthcare in different parts of the world. Berkowitz, whose service has included working with people who suffer from cleft lips and cleft palates, described the difficulty of accessing healthcare. She shared the journey of “one mother from a remote area in Peru” who traveled a great distance in order for her child to be treated. Berkowitz stressed something about this mother’s journey that spoke to the larger theme of being bold for change. She said that often it is a matter of coming “outside of our comfort zone.” Berkowitz stated that for those who are tending to those in need, and for those who are being treated, both sides have to go beyond their limits for each side to meet in the middle.

Dr. Nancy Heilbronner, from the School of Education, discussed the presence of women in the science field. She began her presentation with an activity that would bring to light another area in which women are not represented. Heilbronner asked the audience, which was comprised of both men and women, to close their eyes and think of a female teacher that has had an influence on their lives. After a few moments, she instructed audience members to open their eyes.

She then posed the question: “Were any of these teachers science teachers?”

Of all the audience, less than a handful raised their hands.

“Boys are stepping ahead in science,” said Heilbronner, “Girls are not speaking out; not raising their hands.”

Heilbronner went on to discuss the lack of presence of women in STEM degrees and the importance of getting women to enter careers where they will be paid more. At one point during her presentation, she displayed two magazine covers: one with a picture of a man engaged in a water sport, and the other with a young woman sitting in a relaxing position. The audience indicated that the shot of the man displayed him in a state of action and active participation, while the shot of the woman focused more on her beauty instead of focusing on what she could do.

The conference continued with Prof. Abby Hirsch and Prof. Emily Murphy from the School of Social and Behavioral Sciences. Hirsch discussed the importance of female role models, the history of the climate of women in the workforce, and their demand for equal pay as they balanced their work and family lives. Murphy began with a powerful and personal poem she wrote as a reflection after attending the Women’s March in Washington and also discussed the difficulty of the work-life balance.

“We need to advocate for paid leave for families in America,” Murphy said. She addressed the shift from taking care of a child to going back to work, and stressed the significance of “the support women need as they transition” between these different aspects of their lives.

The last two presenters of the afternoon were Dr. Celia Reissig-Vasile from the School of Liberal Arts, and Dr. Li Yong, School of Business. They shared the story of the unrelenting protest of The Mothers and Grandmothers of Plaza de Mayo, Argentina, a group of women who began to march against the disappearance of their children and grandchildren under the military dictatorship that lasted between 1976 and 1983.

“They would meet every Thursday in 1976 and walk around with signs and kerchiefs around their heads with the names of the disappeared. The kerchiefs mimicked baby blankets,” said Reissig-Vasile who discussed the impact the women had by taking themselves out of the private sphere and into the public sphere. The movement started with only 17 women, and though the dictatorship is no longer in place, the women still continued to march.

Yong closed the presentation by giving audience members an international perspective and look at the different areas and challenges that women face in the workplace.

Yong discussed the United Nations The World’s Women 2015 Report and shared its data comparing the global representation of women in the workforce. Yong communicated an overall issue that one hopes will change in the future: that “women are significantly underrepresented in decision making positions.”

Her presentation was followed by a Q&A session and reception where guests were invited to look at the different posters and books pertaining to women’s issues such as education and healthcare.

One of the posters depicted an activity that Mercy students were asked to participate in prior to the start of the program. In response to the IWD theme of Be Bold for Change, students wrote what they wanted to do going forward in their lives to support the theme. Answers ranged from being heard, to overcoming obstacles, and to empowering other women.

With the success of this year’s celebration of International Women’s Day at Mercy, it is hoped that future observances continue to bring educators together to share their voices and shed light on the achievements of women, while still being aware of what still needs to be accomplished. The program reflected the theme of empowerment that drives the future of women’s rights. As women forge ahead, opportunities like this that unite people together for a cause, regardless of gender, show that change is on the horizon.