Mercy Senior Is All About Putting On A Show 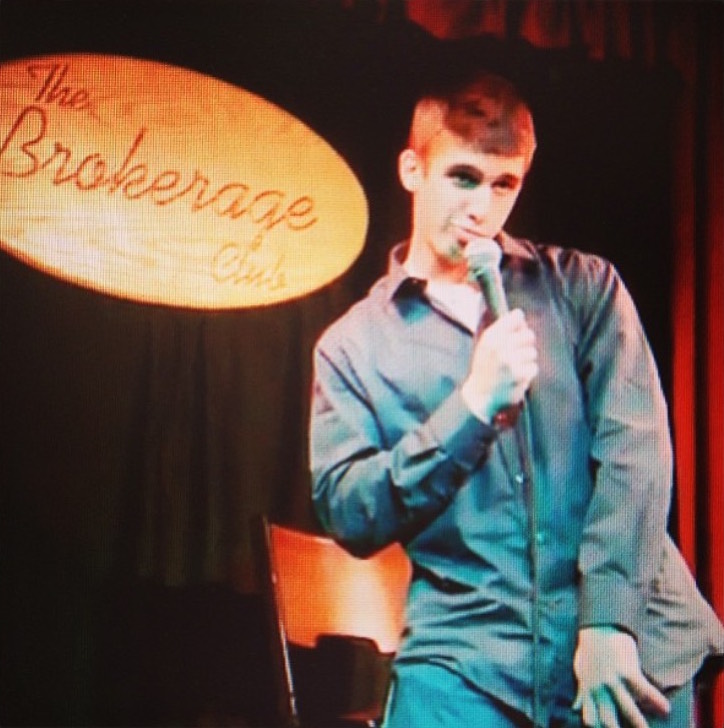 Standing on the tiny stage, Paul Santoli became overwhelmed with nerves as he did his first stand up comedy show.

He looked out into the audience as he started sweating bullets. Before he knew it, he blacked out as the sound of laughter and the audience clapping. He knew he did his job.

The senior, majoring in marketing, always had the sense that he wanted to entertain.

“When I was younger, I’d sit at the dinner table and never eat,” he said. “I’d wait for a certain point and sit up, then do ‘Simon Says.’”

“I was more focused on being the entertainment than eating.”

As he got older, Santoli began playing lacrosse but came to the realization of what it was that he was doing out there on the field. He was rather focused on performing in front of a crowd than winning and losing.

“I’d come with a different attitude if we had a home game and think, ‘Okay, show time!’”

Though he had interest in entertainment, Santoli didn’t always know what it was he wanted to do, but is glad he didn’t.

“If I took up acting at a younger age, I wouldn’t have taken it seriously. I would’ve been immature and probably blown any opportunity,” he said sincerely.

“I guess you have to experience things in life to know what you really want to do.”

And that’s exactly what happened.

At 18, Santoli did his first stand up comedy routine in front of a live audience.

“There were about 75 people in the audience. I only saw about eight of them, yet I heard 100.”

As scary as it was, he got through it and learned real quick.

“You stand up there and tell a story,” Santoli said.

After understanding what he needed to practice on, and having friends who pushed him to go for it, Santoli decided to join a contest at Broadway Comedy Club last year.

“Standing up there for the five minutes was enjoyable. I actually ended up winning the contest, too.”

That was the turning point for Santoli, as he realized he did not see himself sitting at an office, behind a desk, working nine to five days. Instead, he saw himself on the big screen, acting alongside many great actors.

“It took me a while to see it,” he said. “But now, I say it openly because if you don’t believe in your dream, you can’t do it.”

“You have to own what you want to do.”

What helped ensure Santoli what he wanted to do was after he posted a video on Instagram and received positive feedback on how put together it was, as well as how funny it was.

Since then, he began his own production, Doughnuts Productions. The name comes from Santoli’s nickname while he played lacrosse, and it stuck ever since.

The production consists of Santoli and his two friends, Chris Richards and Brendan Day.

“It’s just the three of us; Chris and I write and act everything, and Day is our video editor,” he said.

With their production, they have put together short videos on just about anything, and post to Youtube. But this, by no means, means they want to be labeled as Youtubers, because they’re not.

“I want my videos to have meaning to them and mean something in the future,” he said. “These videos are actually for our portfolio when we audition in the future.”

Santoli and Richards show their acting ability through their inspired videos they think of while driving or seeing people walking.

“Sometimes, I think of a funny twist to a natural situation and I’ll tell the other two my idea and pitch it,” Santoli said. “And if it’s good, we’ll run with it.”

“There’s videos that we record like power walking, where my neighbor actually came out and saw me doing what I was doing with a confused look on their face,” he said, laughing.

“Then there are videos like Persafiffle, a spoof of an infocommercial, that wasn’t fun to film but came out great.”

He admits that some videos are fun to film  while others aren’t fun to film but are great to watch.

When one watches these videos, they’ll see more than Santoli and Richards. Among the many seen in the videos are alumni, Michael Cashman, Robert Rossi, Bobby McDonough and Joe Persico.

“When you look at Adam Sander and his movies, he has his clique,” Santoli said. “And I have mine. I’m close with these guys, comfortable around them and they’re all really talented.”

“Most of them are pretty dedicated to it, too. They find time and I respect that.”

Though they may not all be into acting, Santoli says him and Richards keep a positive mentality with it, and they know this is something they’ll have in the future to reminisce on.

The thought of putting a smile on someone’s face and entertaining people of all ages is a dream Santoli wants to pursue. He’s recently made the decision that, though he loves comedy, he also wants to branch out of it, and be as diverse as Robin Williams.

“Williams was an amazing comedian, and always had a stunning, dramatic scene,” he said. “No matter the movie, he killed the role and I aspire to be like him.”

“Of course, I’ll never be anywhere near him, but if I can gain the mentality like he had, I could be up there.”

To gain these techniques, he began attending Stella Adler School of Acting, recently, to help him learn the ins and outs of acting. And what makes this experience even better for Santoli is that he’s taking these classes along with his best friend.

“I’m lucky to have a friend like Chris since ninth grade because we’re both on the same page when it comes to acting,” he said. “It’s extremely rare to find someone who shares he same passion as you and pursue it with you.”

With each workshop they take, they’ve learned how to act in different ways including characters, scripts and time periods.

“A lot of the classes we’re in, it’s just being ourselves,” Santoli said. “That’s what I’m learning right now; I have to be myself to find my acting role.”

Being himself while acting is something Santoli finds interesting because it gives him an opportunity to release all the bad events that happened to him, in a different, healthy way.

“I’ve been surrounded by a lot of tragedy in my life and with filming, you get to release all of it,” he said. “It may look like a performance but there’s actually a sense of realism in there.”

“I think that’s something the audience overlooks.”

He admits he’s done that many times before, while he was younger. He didn’t see movies the way he does now, or look at the dramatic scenes as anything but, until he started to put himself in those shoes.

“If I’m handed a dramatic scene filled with anger and emotion, I have these memories that can bring me to that level. It’s hard, but once you start the emotion, it takes care of itself from there.”

“I want my audience to see another side of me, where I can really hit the emotional level, not just as a comedian,” Santoli said as he referenced Robin Williams.

For any actor in the field, it’s hard to dodge negative feedback when one puts themselves out there in the world and gives everything they have to a performance.

As for Santoli, in these workshops, they also do auditions, where each individual goes in, one at a time.

“We learn the art behind acting through the feedback the teacher gives to improve ourselves,” he said. “It’s easy to be a critic; you just watch and comment, but when you’re the one acting it, the feedback can be hard to hear.”

He admits that it’s tough to accept the feedback at times, and that it actually took him a while to understand that it’s impossible to make every single person in a room laugh because everyone laughs at different jokes.

“This is something I’m still learning with my Youtube videos,” he said. “Trust me, I know there are kids out there who watch the videos and think, ‘this is stupid,’ but then there’s others who give positive feedback.”

“There could be 147 people laughing, and three could say, ‘I didn’t like it.’ I would be mad at those three people.”

Santoli has since learned to accept whatever feedback comes his way, even if it hurts at times. He admits that the best feedback that he’s received is when someone says they loved his video and showed it to one of their friends.

“I think you’ve made your mark when someone shows someone else without you asking,” Santoli said. “It means you were good for them to say, ‘Hey, come here, you have to see this.’”

“And that’s tough to strive for.”

Through his experience, Santoli has learned that acting is more than acting. It’s taking risks to pursue a dream, no matter how far stretched it actually is.

He references it as a ‘Life Worth Living,’ as many may see him wearing the logo on his shirts, in passing.

“The idea was actually from Chris, I can’t take the credit for that,” he said, being honest. “We ended up getting them printed on t-shirts and many people supporting us with it since.”

To everyone they sold the shirts to, they explained the meaning behind it, as they symbolize pursing one’s dreams and never giving up on something he or she envisions  doing.

“Everyone’s dreams are different but the shirts are about going after what you really want to do and not setting for anything you don’t want to.” 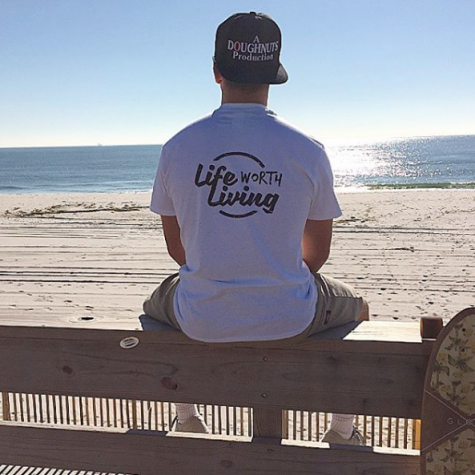 “For me it’s acting and comedy,” he said. “I know I want to make the world laugh.”

He knows a process like the one he’s heading towards is a tough business and it takes patience and time, but it doesn’t worry him if it doesn’t work out.

“It’s not not going to work out,” Santoli said. “I really can’t picture myself being in an office or as a bus boy or an Uber driver.”

He refers to himself in the third person when planning his future.

“Paul Santoli was not put on this world for that. I’ll find my way to entertain somehow, because if I don’t, the next person may.”

He admits one of the reasons he doesn’t give up is because of his mother.

But if there’s one thing he’s definitely sure of, is that he’ll never find himself saying, ‘I wish I could’ve done more.’

“God forbid it doesn’t happen for me, at least I can say that I did everything I could.”

As Santoli looks at the Doughnuts Productions, he can’t take all the credit. He knows the production would be nothing, nor would he have videos for a resume if it weren’t for Richards and Day, who spent vigorous hours staying committed.

Once he clicks on one of the videos, he finds himself going into deep thought, and wonder if everything he’s doing will ever be worth it. The thoughts of, ‘Will I ever be recognized or remembered?’ cloud his mind.

And one day, it happened. A memory that stands out in Santoli’s mind that ensured him that it’s all worth it, was at a deli in his hometown.

“I was eating and this kid kept looking at me,” he said. “He came over and said, ‘Hey, you’re the guy from those Youtube videos, right? You’re hilarious.’”

As tedious, nerve wracking, and stressful performing could be, hearing that feedback and being recognized by a random stranger brought Santoli excitement.

“This kid ensured me that I have to continue to aim high and never take no for an answer.”

Santoli says everyone has their talent, one just has to find theirs first.

“Have faith, pray, and believe in yourself.”