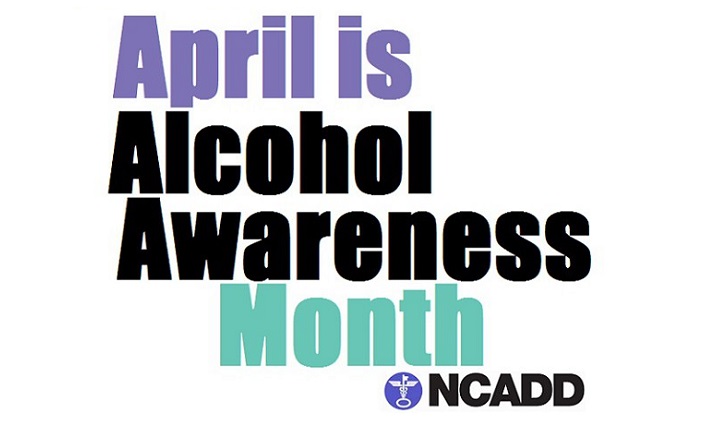 April has been designated the month in which attention is placed on alcohol awareness and the steps toward recovery from alcoholism for the past 30 years.

In 1987, the National Council on Alcoholism and Drug Dependence (NCADD) created Alcohol Awareness Month in order to inform Americans about the dangers of alcoholism, and to use communication as a preventative measure in guarding against fatality by encouraging those who may be suffering, to seek treatment.

On  April 19 at Mercy’s Dobbs Ferry Campus, students from the Nursing Education program extended the message of Alcohol Awareness Month by holding presentations on the effects of both alcohol abuse and alcoholism.

Between 11 a.m. and 2 p.m., students passing through the Lecture Hall Lobby to and from class were asked to participate in several activities to promote alcohol awareness.  Students were given the opportunity to test their knowledge through a visual comparison on alcohol levels in different amounts and types of drinks, and while wearing goggles that simulated the effects of different blood alcohol concentration (BAC) levels. Users made an attempt to catch a ball or complete the walk and turn field sobriety test. 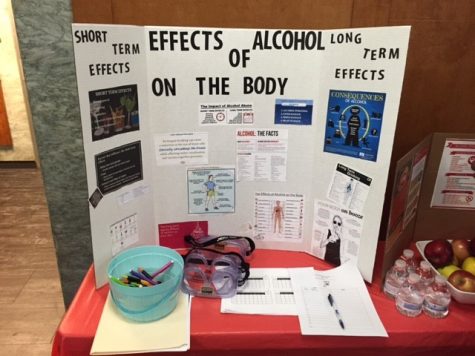 For the walk and turn test, students were first asked to walk along the line without the goggles before attempting to do it while wearing them. Though each pair of goggles represented a different measure of impairment, the results were always the same.

Each participant demonstrated difficulty in trying to complete the task.

According to U.S. Department of Health and Human Services, alcohol abuse, which is different from alcoholism, “is a pattern of drinking that is harmful to the drinker or others.”

Alcoholism, which occurs as a result of alcohol abuse, is also referred to as alcohol dependence and is classified as a disease. Alcoholism “is chronic, or lifelong, and it can be both progressive and life threatening.”

Though college students are not necessarily considered people who are most at risk for alcohol abuse or alcoholism, Nursing student Helen Hehir states, that there are a lot of different factors that put them at risk.

“The younger one starts drinking, the more likely he or she will become addicted,” says Hehir.

For men and women the risks of alcohol abuse vary. A woman’s body contains more fat and less water to weaken the effect of alcohol, whereas a man’s body contains more water than fat. The National Institute of Alcohol Abuse and Alcoholism (NIAAA) indicates that a combination of genetics and environmental factors can also contribute to a person’s susceptibility to alcohol abuse and alcoholism.

“It takes the body one hour for alcohol to pass through,” says Manuela LoMedico, one of the four graduate students hosting the presentations. “College students that have had the talk with their parents are less likely to binge drink.” 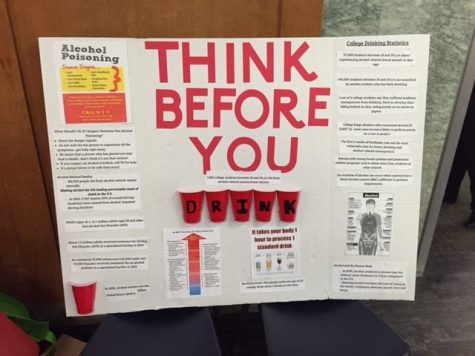 Measures based on education and transparency are what Hehir and LoMedico and the other nursing students are using to convey information to students through the activities and displays featuring various facts on how alcohol affects the body. They want students to know that if they do drink, they should understand the importance of moderation.

The effects on the body from excessive drinking can be devastating and can lead to health problems such as heart and liver disease, dementia, throat and esophageal cancers, and fetal alcohol syndrome.

Kira Capowski, another student participating in the presentation, addressed another set of factors that contribute to the risk of college students abusing alcohol. Capowski states that students turn to alcohol in order “to fit in” and because of “stress.”

“It lowers inhibition,” says Capowski. “People feel like they can do anything.”

Colleen Martin, who is in her last year of Nursing education and completing her practicum, says there are instances when college students have found themselves in dangerous situations, such as waking up without clothing after previously drinking heavily. Leaving them unaware of what has happened to them.

A person who abuses alcohol is “more likely to use illegal drugs. More likely to be victimized in a sexual situation,” says Capowski.

The U.S. Department of Transportation National Highway safety Administration in 2015 “an average of one alcohol impaired driving fatality occurred every  51 minutes.

In educating students about alcohol, the nursing students also stressed the importance of helping those who are in need. Though they state one cannot always look at someone and tell that he or she may have a problem with alcohol, one may see changes in their behavior, which Capowski says may become evident in the way the user “manages his or her money,” or that he or she suddenly has a “not caring” attitude toward their actions.

In addition to college students, many people often do not know what to do if someone else may have a drinking problem, and they may not know how to help someone if they have alcohol poisoning. Capowski shared a common case study of a student attending another college dying because he was left unattended and did not receive proper medical attention.

As students walked by Hehir, LoMedico, Martin and Capowski  continuously invited them over to share the importance of alcohol awareness. Giving them information to reduce risk of alcohol abuse, help others get the help that they need, and most importantly, perhaps help to save a life.

“College students,” says LoMedico, “they’re going to drink. Know what your limit is. Say something if you see something.”