Tapia Has Her Eye On Serving The Greater Good 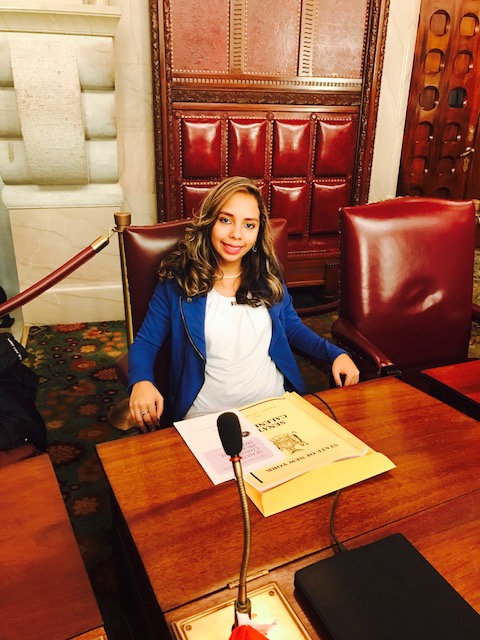 One Mercy student already has eyes at serving the public and making the state a better place to live.

Karlin Tapia, a first generation senior studying political science, is currently interning for David Carlucci, a New York State Senate in Albany. She has also made trips to visit other dignitaries, like Supreme Court Justice John P. Colangelo and relishes in the opportunity presented to her.

“There are thirty other interns who are from a different schools and I’m the only one from Mercy College,” said Tapia.

He has also played an instrumental role in standing up for progressive issues.  This includes being “an outspoken voice against hydrofracking in New York, fighting to protect a woman’s right to choose, and being a key supporter of passing marriage equality in New York.”

The Institute for Energy & Environmental Research defines hydrofracking as, “hydraulic fracturing, a technique in which large amounts of water, combined with smaller amounts of chemicals and sand, are pumped under high pressure into a drilled gas well.”

“It’s time for other Mercy students to take part in this opportunity like I have,” said Tapia.

As an intern for Carlucci, Tapia’s title is a session assistant. Her duties consist a lot of assisting with the Albany office. She spends time researching for bills, takes meetings with constituents and organizations and even does briefers for the Senator during press events, hearings, and sessions.

She was given this opportunity by one of her professors, Dr. Donna Bookin, who is the program director for Legal Studies in the School of Social and Behavioral Sciences.

“Dr. Bookin suggested that I apply for this internship,” Tapia says.

“Ms. Tapia is a highly motivated young woman who immediately completed the application for the internship and was rewarded for her diligence,” Bookin said. “I am very proud of her. She is doing excellent work in Albany.”

And so she did. She took a chance and was accepted for the Student Program at the New York State Senate.

The Student Program is “created to foster an appreciative understanding of New York State’s legislative process, which includes, but is not limited to: the development of legislation and public policy, resolving constituent problems and concerns, the understated procedures and dynamics of legislative session, and problem-solving in state government. The New York State Senate offers undergraduate students an unparalleled opportunity to observe government in action and to learn how legislatures operate,” according to the undergraduate program.

This internship has definitely opened Tapia’s eyes as to what she wants to do with her career in the future.

“I want to become a judge,” she said. “I want to do the right thing for others and give them a fair treatment.”

“As a child, my parents were going through a divorce so I was in and out of court often; however, I admired the honesty that a judge has.” Tapia said. “I want to continue that passion that I have watched growing up.”

Tapia is currently taking online classes but has plans to go to law school as she is currently studying for the LSATs. She hopes to find a career down the civil law path.

While working for the Senate, it hasn’t always been rainbows and butterflies. Tapia has faced quite a few obstacles – obstacles that she refuses to let slow her down in her career.

“Many of the males at the workforce think of me as an assistant. They ask me to get them a book or a cup of coffee. I usually stand up for myself and not give up,” she says.

That’s usually when they get their own coffee, she explained, with a laugh.

This is Tapia’s first time away from her family, but has been an experience. She has been inspired by working for the Senator; she is able to voice her opinions. Coming from an Ecuadorian immigrant family, it has allowed her to voice what needs to be heard from others like myself.

“Where my family and I live, we don’t have access to all these malls and stores, we usually have to drive too. In Albany, you can just walk out of the home and find a store,” she says as she compared Ossining and Albany. “It’s been an experience.”