Mercy Urges Students To Express Their Voices In Climate Survey 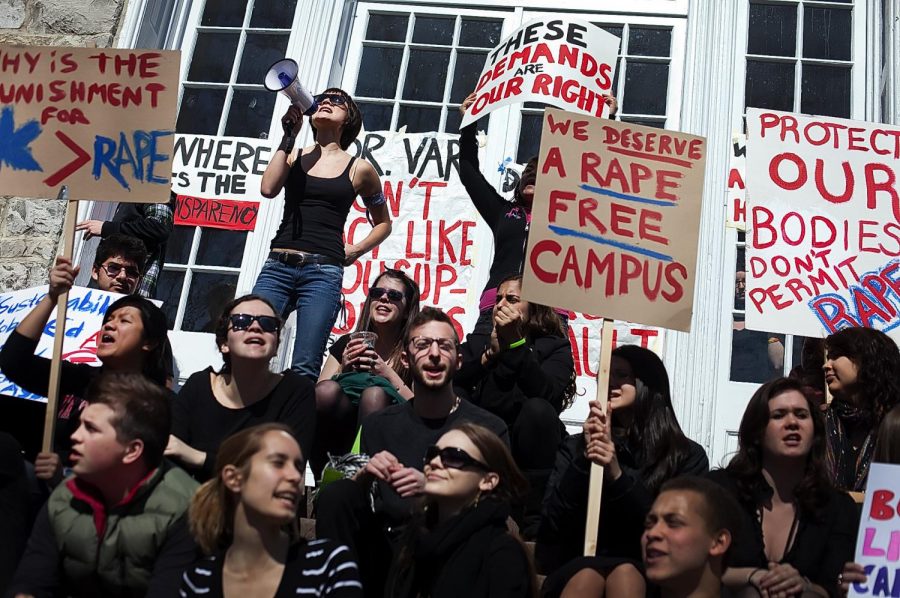 As Mercy College students pass through the halls, turning each corner and walking through every bathroom, cafeteria and building lobby, their eyes are continually drawn to the hundreds of sexual assault flyers posted on campus.

Students were urged to take The Climate Survey, which is a useful tool to determine how campuses can reduce sexual assault. The chatter amongst students wondered if there was a sexual assault issue on campus.

As far as records show, statistically the answer is no.  On average, there has been three or less documented reports per year from all four campuses in the past four years.

According to the National Sexual Violence Resource Center, one in five women and one in 16 men are sexually assaulted while in college, but more than 90 percent of these sexual assault victims on college campuses do not report the assault.

The Resource Center also states that rape is the most under-reported crime; 63 percent of sexual assaults are not reported to the police.

The reason is unclear but many speculate as to why.

Alex Kuhn, a junior marketing major, believes that at least from a guy’s prospective, “No guy wants to admit they were sexually assaulted. It’s degrading.”

Kelly Corvino, a sophomore psychology major had a different approach of mind. “I know of many women who haven’t reported sexual assault because they aren’t sure if it really is is.”

According to the Mercy College Campus Safety Report and Fire Safety Report, sexual assault is defined as, “Inappropriate or unwelcome physical contact or suggestive body language, such as touching, groping, patting, pinching, hugging, kissing, or brushing against an individual’s body.”

Under the New York law, lack of consent to sexual contact may be demonstrated in four of the following ways:

Forcible compulsion including the use of physical force or threat, which places the person in fear of physical injury to self or another; incapacity to consent on the part of the victim; circumstances in which the victim does not expressly acquiesce in the actor’s conduct; and lastly, circumstances in which the victim clearly expressed by words or actions that he/she did not consent to engage in such a sexual act and a reasonable person would have understood such person’s words or actions as an expression of lack of consent to such conduct.

This past March, Ayla Besemer, a sophomore at Yale, asked herself, “Was I raped?”

Besemer was extremely drunk one night during her freshman year and brought home a guy she previously knew. The next morning, she woke up with a bruise on her thigh and a used condom on her floor. Yale requires an “affirmative consent” for sexual activity to be considered truly consensual, but Besemer acknowledges she may well have said yes. She blacked out, admitting she might still have been “fully operational – talking, laughing, drinking more and, indeed, having sex as if minimally drunk.”

Mercy College is a dry campus, meaning there is no alcohol allowed on campus.

Kuhn’s reaction was, “Well, I mean she did invite him back to her room,” while Miriam Oedegaard, a senior Tv/Radio Production Major, responded to Kuhn’s roundabout accusation by saying, “Just because a girl invites a guy back to her place doesn’t mean she is giving him consent.”

Since intoxicated people may not be aware of their surroundings, there is confusion as to know if sexual assault has occurred.

In Besemer’s case, her and the male were both drunk. In her eyes, though she says she was heavily under the influence, they may both have consented but just don’t remember. If this is the case and a “victim” reports a crime, the burden of proof is often difficult to prove.

There are some people who are confused about what it means to be raped, and in many cases, it is suggested that the adults around them may be misleading these victims.

In February of 2015, a fifteen-year-old girl was sexually harassed at her school by a male classmate. The story, titled “Was Bra-ced for a Different Reaction,” described a female student being punished for hitting a male student twice after he had been continually grabbing at her bra straps after she told him to stop multiple times. She had gone to her teacher for help and he told her to ‘ignore it.’

After the school brought in the girl’s mother, attempting to shove the blame on the girl for hitting the boy, the mother’s response threw the teacher for a loop.

“You let him do this? Why didn’t you stop him? Come over here and let me touch the front of your trousers.” After making the teacher feel very uncomfortable by her response, she calmly explained how her daughter defended herself against a sexual attack from another pupil.

“How many times should she have let him touch her? If the person who was supposed to help and protect her in a classroom couldn’t be bothered, what should she have done? He pulled her bra so hard it came undone.”

After a Mercy College class was told this story, they considered whether we need to be better enforcing the difference between ‘yes’ and ‘no’ in young men and women before society can address and resolve any sexual assault problems.

“Prevention is huge,” Gonzalez verbalizes. “And sexual assault cases typically occur with someone you know.”

The National Sexual Violence Resource Center states that in eight out of 10 cases of rape, the victim knew the person who sexually assaulted them.

Because Mercy is focused on keeping their students safe, and because Gov. Andrew Cuomo in the past couple of years has been increasingly troubled about this issue, he signed legislation aimed at increasing protections against sexual assault on public and private college campuses statewide. The “Enough is Enough” legislation, codifies into law protections already on the books for SUNY campuses and created a statewide definition of affirmative consent, also known as “yes means yes.”

Aside from the confirmatory consent piece, New York’s new law establishes an amnesty policy for students reporting sexual assaults who fear they will be penalized for violating other campus policies; creates a students’ bill of rights informing sexual violence victims of their legal rights; requires new training for administrators, staff and students; requires campuses to submit data on reported incidents; establishes a sexual assault victims unit within the State Police, and requires first responders to notify victims of their right to contact outside law enforcement, rather than just campus police.

The new law also includes $10 million in funding for programming.

Mercy College works with many outside agencies such as victim assistance services in Westchester County whom conduct training and have a 24-hour hotline for rape.

All New York public and private colleges are legally required to give out The Climate Survey, which took effect in July 2016, with the provisions applying for the 2016-2017 academic year.

“As of currently, we haven’t been getting much feedback from students regarding the survey,” but Gonzalez and her team are trying to change that.

Outside of these surveys, Gonzalez does training through health and wellness for staff, faculty and students.

There is such an importance in not only being aware of what sexual assault is, but also in being aware of how to avoid getting into that dangerous situation, and also knowing the importance of speaking up if it has ensued, she said. Students need to be increasingly aware that they have resources and people available to them.

“If you hear something, talk to me,” Gonzalez pleas. “We want to see an increase in reports, not because there are more cases, but because it means people are finally realizing the importance of speaking up.”