The Show Goes On: Annual Founders’ Festival is a Smash 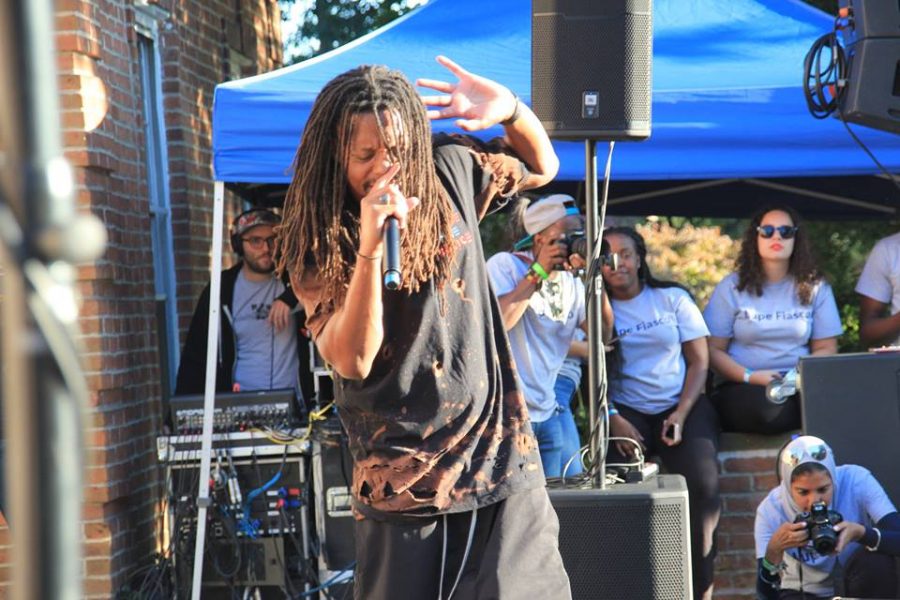 Mercy’s annual fall kick-off event, Founders Day. began on a sunny Sept. 9 day and ended in the cool evening of the upcoming Lupe Fiasco concert. The air, once filled with the smell of gyros, was now filled with the beats of a DJ hyping up a crowd of college students.

The concert took place behind a staff building on campus near the English Department. A drone flew around and got a group shot of the crowd as they were directed to wave at it by a member of Student Life. It buzzed around, trying to get as many shots as possible before the main event.

But the eager crowd wasn’t there for the drone, the DJ, or the nice weather. They came for Lupe Fiasco.

Rapper Lupe Fiasco started his career with debut album Food and Liquor but has in recent years considering retiring from the business for reasons that remain unknown. That fact didn’t seem to worry one fan in attendance, Chris Hubbard, junior.

“The concert was lit,” Hubbard said. A short and sweet, but accurate depiction of the event.

Hubbard was familiar with Lupe’s earlier works like “Superstar” and “Kick Push.”

“He sounded different from what I remember. A different vibe. But he still sounded good,” Hubbard noted.

At around 5:30 p.m. Lupe strode onstage wearing a “Police the Police” t-shirt and addressed the eager crowd. He was greeted with roaring applause from the antsy crowd of students. Lupe descended from the stage to ask a nearby group if they wanted to get closer to the stage before he went into his performance. He invited people from the audience to dance onstage with him, and even live-streamed the concert on Instagram. Chris and the rest of the crowd looked to be having a blast.

Lupe seemed more than comfortable talking to the female members of the crowd as he tried to get one of them to come on stage and twerk. Though the student refused, Lupe was a good sport and decided he’d twerk on his own.

Lupe is clearly a skilled rapper, but his charisma in interacting with the crowd is what marks him as a great performer. Throughout the concert, he frequently left the stage to engage with random members of the audience. It was personal moments like this that made the event special.

The setlist consisted of a mix of old and new hits. He took it way back to his first album Food and Liquor, and then brought out the big guns with material from his latest album Drogas Light. He put his all into every line and didn’t let up until the stage lights dimmed and all that could be heard was the echo of applause.

While Lupe Fiasco was undoubtedly the main event, there was much more fun to be had earlier on at the festival.

The concert was part of the annual Founders Day fall festival for students. While the concert was exclusive to the students, the earlier activities of the festival were open to families and neighbors.

According to Louis Cameron, Student Assessment specialist for Student Life, the festival was designed to help foster a sense of community.

“We really hope to provide an opportunity for people to come together and enjoy the school year,” Cameron said.

It is the hope of the festival planners that Founders Day will provide not only a fun kick-off to the semester, but also reinforce a sense of community and tradition. Students were encouraged to invite family members and friends, and the event was also open to local Dobbs Ferry residents.

The bouncy house and zip-line were popular with kids and students alike, but for the eager freshmen looking for new ways to get involved, Founders Day had them covered. The perimeter of the festival was lined with tables set up to promote the various clubs and student organizations at Mercy. Each was staffed by smiling students encouraging the masses to get involved, participate in raffles or donate to charities.

Clubs like the 3D Printing Club attracted curious onlookers with a high-tech printer making miniature plastic statues, while the Fitness Club enticed students with a Bosu balance. A Bosu balance is like a yoga ball that was cut in half and had a plastic plate glued to the flattened section. The organizers recorded how long one could balance on it with one foot.

Reinforcing that sense of community and inclusivity were students like Forrest Limon, a freshman Business major, who ran a raffle at Founders Day. Business majors had teamed up with the group “Mploy” to conduct a raffle while raising autism awareness.

Mploy is a group that works with people on the autism spectrum to develop career-based skills and connection. The shirts were made with the help of Mploy and were being given away to the winners of the raffle.

Limon had nothing but positive words for the event.

“I’d like to thank Mercy College and the business honors program for this opportunity,” Limon said.

Limon was pleased with how welcoming the crowd was and looked forward to returning to the festival next year. His support for the event was shared by the many happy faces of fellow students enjoying the day’s activities.

Staff was pleased with the turnout for both the concert and the festival itself. Even President Tim Hall was impressed with the event and enjoyed participating in it.

“I like to start the semester off with a big party,” said President Timothy L. Hall as he walked around the festival grounds, and a party it was.