A swarm of students crowded around in a large circle, their backpacks and belongings left abandoned in a small pile off to the side. Upon closer inspection, the massive draw is revealed to be none other than man’s college students’ best friend: dogs.

On Sept. 21,  Mercy College held its annual “Fresh Check Day.” The event is meant to encourage awareness about mental health issues and end the stigma that often is linked to these issues. This year’s Fresh Check Day had the added benefit of having two seasoned therapy animals in attendance.

Stella, a poodle, and Harris, an Australian Labradoodle are both trained to help people, with each specializing in different groups and age ranges. Marissa Levy is the owner and handler of Stella, while Levy’s mother is Harris’.  Levy was more than happy to speak about the dogs’ strengths and achievements while Stella and Harris did their thing, running to and from the eager crowd of students.

“Stella works with developmentally disabled people and with the elderly in nursing homes. Harris works with nursing homes and colleges,” said Levy. Levy and Stella have worked together for years, and she knows how much her dog’s presence can mean to others, whether they be college students or senior citizens.

“Stella hates the red bows we put in her hair, she keeps trying to get them out,” said Levy.

You’d never know how Stella felt about her hair accessories, as she was calm and well-behaved. Levy even encouraged students to pick her up for a cuddle.

“You can pick her up, she’s only 37 pounds. She can also do tricks like sitting and shaking hands,” Levy said. 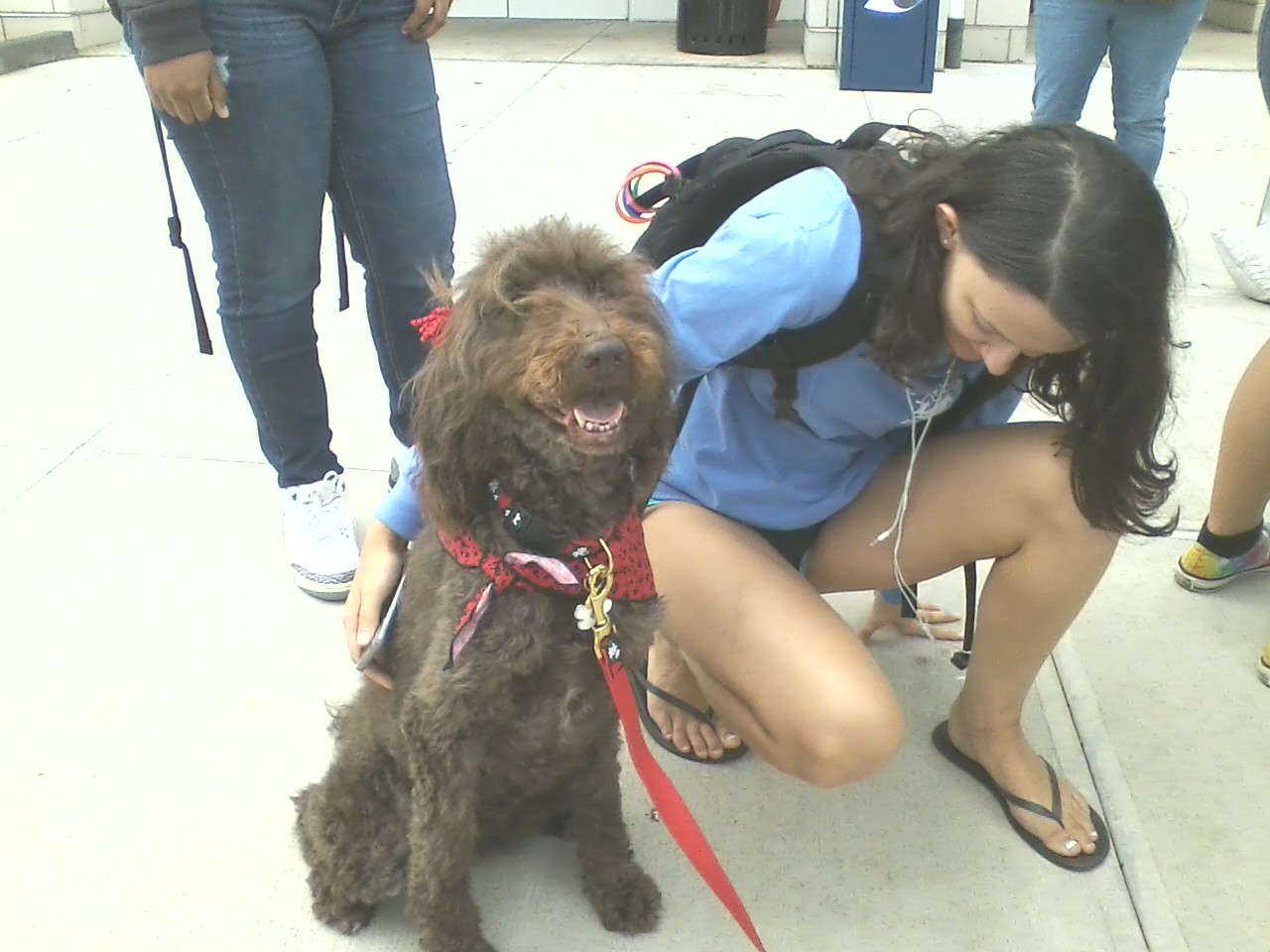 While the tricks are cute, the real talent of these dogs are the years of training they complete to becoming certified therapy animals. The website, tdi.org, lists the requirements for the test as a two-phase process with thirteen individual tests and additional exercise spread throughout the process. On top of that, to even qualify for the test, the dog must be one year old and have a good temperament which is tested by the organization. These therapy dogs receive a quite thorough examination and training process in order to get the honor of being a certified pet.

As far as Levy is concerned, the training certainly makes a difference in helping others.

“Some [people] are afraid of them, but a lot of people find it an uplifting experience, especially the people in nursing homes. I love working with the dogs, and I find it so rewarding,” said Levy.

Any student asked would agree with this statement. Stella and Harris were constantly surrounded by students waiting for their chance to pet them.

One student witnessed firsthand just how popular the campus pups were on Fresh Check Day. Michael Daley II, a sophomore, was present at the event, but couldn’t get close enough to get a pat in, as there were just that many students there.

“I tried to pet the dogs, but there were a lot of people around them. I was like ‘awww’,” Daley said.

Daley let his fellow students have their turns with Stella and Harris, and decided to check out the booths surrounding Hudson Hall. Each booth had materials to either help spread awareness or offer support for different types of mental health issues or just provide fun, stress-relieving activities to the student body. With ten booths in total, Daley had a lot of options to choose from.

Some notable tables included the “U Belong,” “Alcohol Awareness,” and the Title IX awareness booths. The Alcohol Awareness table had support materials and beer-goggles to show how impaired you are when drinking, while The “U Belong” booth was a bit more specific to the campus. “U Belong” focused on helping students understand the stresses that commuter students go through. Most commuters have other obligations such as jobs, children, or other family priorities that can be difficult to cope with. These responsibilities can become even more stressful when students must deal with attending college as well. The booth handed out fliers with information on what students can do to reduce stress, along with services offered by the college. Ana Gonzales, the Title IX campus coordinator, focused on a more serious, yet vitally important campus issue. Her booth focused on ending sexual harassment and discriminatory language in the campus setting.

While each table presented information on important issues, Daley was drawn to the Body Positivity booth run by Louis Cameron, the Student Assessment specialist for Student Life. 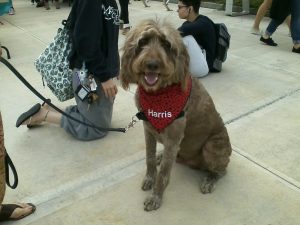 The exercise in question was simple, put an anonymous Post-It note on a drawing of a human body. On the Post-It, students were encouraged to write something they feel proud of or love about his or herself. This booth was just as popular as Stella and Harris because as the day went on, the board became filled up with posts. The posts eventually began to layer onto one another. Cameron even added his own, “his love handles”, to the board. Daley chose to add his own post to the board as well and had no problem sharing what that post was.