“We don’t want students having to choose between books and going to class and having food available.” 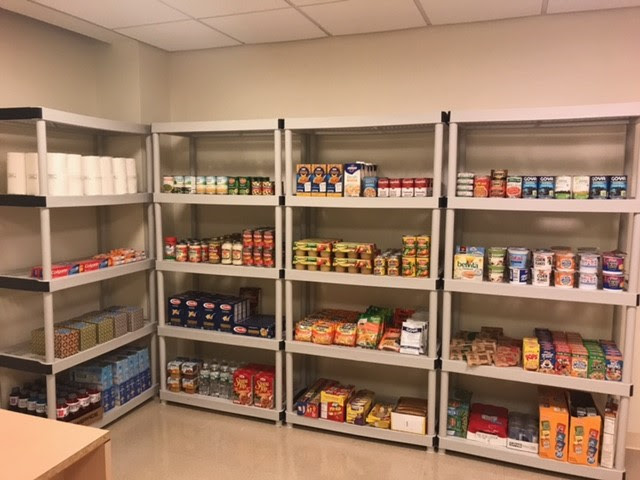 To have a meal in the cafeteria is a hallmark of a student’s life. From a young age, lunch time is at the center of a student’s class schedule. However, for some students the time of lunch is not on their minds, or even an option.

Hunger is a known issue in the United States and around the world when it comes to children. Yet, children do not age out of hunger; not even if they are attending college where the option to purchase a meal plan is available.

A widely distributed survey, “Hunger on Campus,” conducted by the College and University Food Bank Alliance and National Student Campaign Against Hunger and Homelessness, found 48 percent of respondents “reported food insecurity in the previous 30 days” and of those affected 43 percent did have a meal plan.

Felipe Henao, Director of Student Life, Health and Wellness for Mercy College, describes the effort started after there were \a few incidents in which students were stealing food from the college cafeterias.

In conjuncture with the Office of Health and Wellness and Accessibility Office, Student Life began a two-year long effort in Fall 2015 that led to the decision to start a food pantry.  He said, “I didn’t want to wait because we were finally able to secure this spot.”

The newly launched Maverick Market will be a walk-in service for any student who is faced with food insecurity. No financial information is asked in accepting the food pantry’s services. Students do not even need to provide names or CWIDs to use the service. “We don’t want students to feel embarrassed giving that information. We don’t want students to feel we are looking down on them in a way,” explains Hannah Berling, Student Life Specialist for the Manhattan and Bronx campuses.

Students who partake in the Maverick Market’s services will only be asked to fill out a survey about what food items they need and their living circumstances. 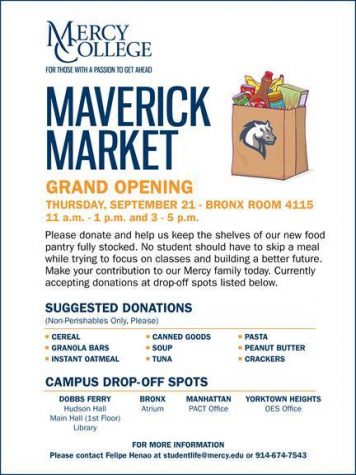 The decision to have the Maverick Market reside on the Bronx Campus versus the residential dorm of Dobbs Ferry Campus was done in light of the student make up of both campuses. “We serve a lot of non-traditional students, a lot of students with families specifically at the Bronx Campus so we want to make sure were acknowledging all the needs for the family.”

“I know the struggles that some of our students face in terms of managing their own needs or the needs of their families while they are in school,” President Tim Hall said when asked about the food pantry.

The knowledge of the pantry possibly serving those outside of the student body prompted the Maverick Market to also accept donated items, such as baby food and toiletries.

A representative for the Food Bank of NYC told The Impact, “They’re not a member yet, but they have submitted an application.” The application is currently undergoing the Food Bank’s review process.

With many shifting factors, Henao and Berling are determining the first few months as the pilot stage of the food pantry.

Anything is adjustable to meet the needs of the student, including the decision to have the Maverick Market be open every third Thursday of the month from 11 a.m. to 1 p.m. and 3 p.m. to 5 p.m.

“If we find down the road that is not an opportune time for students, we will adjust it,” Haneo says.

However, knowing what the needs are may be issue number one in the pilot stage of the Maverick Market. Besides the individual cases that led to the push for a food pantry at Mercy College, no students have personally approached Haneo or Berling about an intention to take part in the food pantry’s services.

The “Hunger on Campus” survey attributed that fact that students are not taking advantage of college food services not only to social stigma, but also to their lack of awareness among the student body about the pantry.

Several students were approached in the Main Lobby of the Bronx Campus in regard to the Maverick Market. Each expressed surprise or lack of awareness about a food pantry opening that day on the Bronx Campus.

Brigitte DeSane and Cassandra Rando, Co-Presidents of the Dobbs Ferry Honors Association, say the association will take part in “spreading the word by encouraging others to donate to the food pantry as well as donating themselves.”

The Honors Association says those who donate their time can claim it as community service hours.

Her hope is that the soft launch, grand opening and time in-between, will assist in starting a greater awareness of the food pantry through word of mouth.

The Maverick Market will have its grand opening on Oct. 19 at the Bronx Campus. The event is coupled with a showcase of the Office of Accessibility, Student Counseling Office, and Health Office.