DACA Issue Has Country, and Mercy, Divided Over Immigration 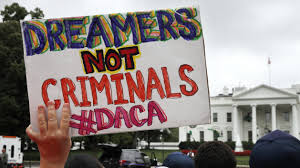 They didn’t choose the United States – the decision was made for them. The children grew up in America, and for some it is all they know.  Maybe some have some vague memories of another place they lived when they were small children. When they hear of being sent back home, they don’t know where that is. They don’t understand the concept of birthplace.  These children were brought to the United States by their parents illegally for the opportunity to have a better life.

In September 2017, President Donald Trump and his administration said the Deferred Action for Childhood Arrivals (DACA) would end if Congress didn’t come up with a legitimate way to reestablish the policy in six months, a concept which has shaken up many immigrants who fear deportation.

Deferred Action for Childhood Arrivals is a program created by former President Barack Obama in June 2012 for individuals who came to the United States as children before age 16. They had to meet several guidelines to be considered for the deferred action for a maximum of two years then after it would be subject to renewal. If they got it, they would get a social security number and would be eligible to work. It was used as prosecutorial discretion to defer removal action against an individual for a period of time but does not provide lawful status, according to U.S. Citizenship and Immigration Services.

New applications have not been accepted since after Trump and his administration sent out the statement claiming DACA might come to an end. The individuals whose own that will expire before May 2018 had until Oct. 5, 2017 to send in their paper work to renew it. To those applications that were already processed before they put out that information will still continue to be processed.

“I am not going to just cut DACA off, but rather provide a window of opportunity for Congress to finally act,” said Trump said in a statement.

There are about 790,000 people in this program, according to Pew Research Center, who may be forced to relocate.

In a recent Facebook post by former President Barack Obama, he stated “This is about young people who grew up in America – kids who study in our schools, young adults who are starting careers, patriots who pledge allegiance to our flag. These Dreamers are Americans in their hearts, in their minds, in every single way but one: on paper. They were brought to this country by their parents, sometimes even as infants. They may not know a country besides ours. They may not even know a language besides English. We shouldn’t threaten the future of this group of young people who are here through no fault of their own, who pose no threat, who are not taking away anything from the rest of us.” 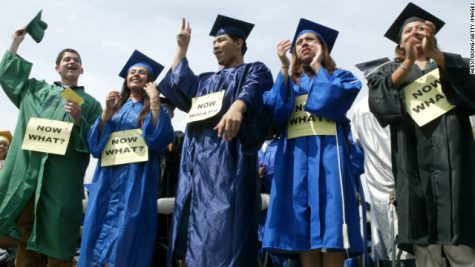 Paralegal and specialist in Immigration, Elizabeth Williams, discussed the affects the dreamers will have to face once Congress makes a decision on DACA with The Impact. Williams mentions that Obama wrote an executive order to avoid deportation and provide a social security number. With the social security number, they were able to enroll into college after high school and get a job. Some of them even got the opportunity to travel out of the United States with Advanced Parole for humanitarian reasons by applying and getting approved by immigration.  They are also contributing to the society and paying their taxes.

She adds that “The Dreamers have impacted many companies with their skills, knowledge, and drive. ”

The only way they may be able to stay is if Congress comes up with a way to pass the law or if  they are/getting married . However, that’s only if they originally came here on a visa. Every President of the United States has the right to do an executive order, it is an order that has force of law.  They send out this order if Congress can’t pass the Legislation. DACA will be expiring on March 5, 2018.  Trump does have the power to rescind the executive order, since it is not a law. It will be a whole new program if Congress passes a legislation to legalize the DACA receptions. If they do pass the legislation, those who label themselves as “Dreamers” will become lawful permanent resident, according to Williams.

Those affected are subject to deportation, but first priority will not get deported, the Department of Homeland Security said in a statement, yet they could be arrested and deported if they are encountered by ICE officers.

The DACA controversy has been a an issue for Trump since he was a  Presidential candidate. Ironically, polls reports by the Atlantic and other outlets that a majority of Republicans and Trump supporters actually support DACA, nearly 80 percent. Yet immigration hard liners have called for the end of DACA, and Trump originally proposed to rescind it, and many were surprised he didn’t right away.

The Mercy community has been vocal on both sides of the discussion.

“They are apart of our future as a country and their accomplishments should not be jeopardized because of the sole fact that they were not born in the United States. I know they are one of the most hardworking groups of people and I strongly believe they should be given a chance to prove that their hard work is not a defect to our country but rather an asset,” said junior at Mercy College, Michelle Guerrero.

“I think if the person can really prove that they are a DACA dreamer person, then they should be allowed to stay. This is the only country and culture they’ve ever known and to be sent back to a place where they know absolutely nothing about is sad. It wasn’t their choice to come here in the first place and it’s truly unfair to make them leave. They should set up perimeters that can be agreed to, those people should be able to stay under certain conditions. I disagree whole heartily with what the government.” said Mercy College Adjunct Professor, Jocelyn Greenky Herz.

There have been rallies for the ending of DACA. Thousands of people documented and non-documented showed up with their colorful signs to show their disdain towards Trump and his administration decision. They marched, chanted, and shouted to show their disapproval. They let their voices be heard in hope that it will change Trump and his administration’s decision and it will keep the DACA program for all the dreamers out there. 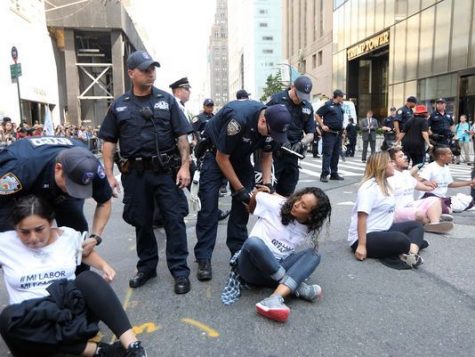 In a recent protests that took place in front of Trump Tower, ten people were arrested for disorderly conduct, obstructing traffic, and for refusing to leave, according to police officials. Among those ten people, there was three congressional Democrats, the head of New York City Council and Speaker of the City Council.

Mercy College Vice President of Student Affairs, Kevin Joyce, sent out an mass email saying, “Mercy College cherishes, and will protect, the dignity of all members of the College community. The college was founded by the sisters of mercy to serve immigrants and anyone determined enough to earn a better place in life. Mercy had been and will remain an institution devoted to helping anyone build a future for themselves and their families in this county.”

Students from Mercy College who fell into the category  contacted by The Impact refused to comment on the record.

The school even suggested places for people in the DACA program to go in the various Boroughs in New York City (Bronx, Brooklyn, Manhattan, Queens, and Staten Island) to speak to local organizations for advice and assistance.

Mercy College offers free counseling services at all on their campuses. Students can book an appointment with the psychologist at the Student Counseling Center.  You can go to read more about Mercy Counseling services here. Or contact the main number for all campuses at (914) 888-5150.

“I feel like it’s a selfish decision. It makes me sad and mad how the government wants to take away our opportunity to dream and succeed. We are really some of the hardest workers in America. We can help America in so many ways. I am afraid to lose my athletic scholarship and be deported because I have been working very hard to get where I am now,” said Brianna, a college student in the DACA program who asked to not have her last name printed.

Obama echoed a lot of those sentiments recently on his Facebook page.

“Ultimately, this is about basic decency. This is about whether we are a people who kick hopeful young strivers out of America, or whether we treat them the way we’d want our own kids to be treated. It’s about who we are as a people – and who we want to be.”