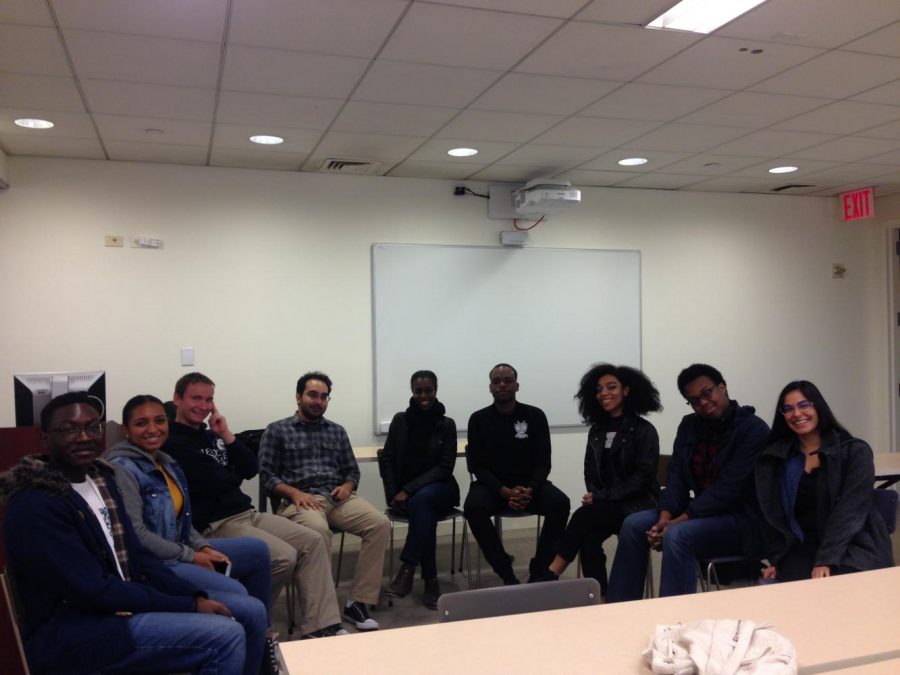 Calling all theater lovers! On Sept. 30, the theater club hosted an event in which Awoye Timpo spoke to students about her career as a successful director and producer.

Timpo directed and produced many numerous plays. She was inspired to become a director when she was 14 years old having watched a production of Anna Deavere Smith’s Twilight: Los Angeles, 1992. The play was based on Smith interviews with people who were involved and associated with the L.A. riots and then compiled those interviews into a play.

“This tremendous work of theater became a catalyst for us to talk about race and politics and things that were happening in the world. It taught me about the power of art to both entertain and create dialogue. It was a great lesson about the responsibility of the artist as a citizen,” said Timpo.

The members of the club sat in a circle with Timpo and listened as she discussed her experiences in the theater. She gave the students advice on how to get into acting and behind the scenes. She spoke about her career in the field and what inspired her to get into the theater. Members asked curious question about being a director and what kind of struggles she had to go through to get there. The members also shared their passions for acting and directing. Timpo gave them a chance to jump in her discussion and talk to her about their experiences as well.

She attended Ohio Wesleyan University, studying Theater, French and Spanish. She would earn her M.A. from the University of London in Paris, and then for two years worked at Juilliard. She would put all the money that she earned from work on plays she was directing. She worked as an Assistant Director in the Public Theater, Signature Theater, Two River Theater and the Royal Shakespeare Company. She was always drawn to choreography and movement as well as being in love with the spirit of invention. Her role is to bring people together to explore any given piece of work and connect them to a common goal.

“It’s really an extraordinary thing to tell stories and engage in conversations with so many extraordinary artists to explore all the moments within a piece of work. I didn’t know all the intricacies of the job at the time, but I was attracted to the idea of the exploration, creating an experience for the audience and engaging everyone in conversation about life and humanity and the way we exist with one another in the world.”  says Timpo.

Timpo is currently working on a upcoming production called, The Homecoming Queen in the Atlantic Theater which is set to begin on Jan. 10.

The theater club brings guest speakers almost every Saturday to give students insight on how to be a part of the theater world. This is the first year that the club has taken off, they previously had a meeting in the Spring of 2017 to discuss their ideas of building the club. It was created by Reeyaz Bettencourt along with Sandra Maria Atchou and Dany Larame. Bettencourt got in contact with Timpo to speak to the students about her experiences and knowledge of the theater. Students feel it is important for the club to host speakers from the field because the students can get the inside scoop on what’s it like to be in that career.

“Eventually we want to build this club and do plays. We will see how this year goes. This club is an outlet for people who love theater and we try to give those people connections,” says Larame.

Larame, who is majoring in physical therapy and a senior in Mercy College, has a huge passion for acting. In high school, he was part of the theater/drama club as well as high school plays. He aspires to become an actor and work in films. Being from Haiti and coming to America was difficult for him because he did not know the English language. He relied on watching movies to learn English, but it become more than just learning a language – it become an interest. The event was helpful to Larame, especially with the advice that Timpo gave him.

“She has an interesting perspective and I felt that she could help me be where I want to be in life. Her advice helped me, the biggest thing she said was you never know who you’re going to meet – it’s a small community, especially in theater. You want to be great and talented but at the end of the day you have to have great communication with the people you work with it,” said Larame.

“You can be talented but if you don’t have that interpersonal connection with them, it’s not going to last.” said Larame.

Many members view this event as a lifetime experience. They left the event with some knowledge and information about becoming an actor, or being part of the crew behind the scene. Liana Negroni, who is a Junior at Mercy College, described the event as a learning experience. Before joining this club she was never involved in a theater club or in a play. Wanting to try something new and improve her memory skills, she joined the theater club. It also helps her interact and communicate with people. Negroni found Timpo to be inspiring because she has gone through so much to get to where she is now. She recalls asking Timpo what the most rewarding about what she does. Timpo’s response was to be able to communicate with audience.

“That was really inspiring because whatever you want to do if you have that passion and that rewarding feeling at the end, then you know what you’re doing is right.” Negroni mentions.

Negroni encourages Mercy students to come join the club. As it’s not just for those who are passionate for the theater. It also, “a way to learn about themselves and be comfortable to speak in front of others.”

The club is held on Saturdays but also on Wednesdays and Thursdays. On Wednesdays the members focus on monologue while on Thursdays they focus on improvising. Everyone is welcomed to join.

“The club is for everyone, if you have an interest in acting or maybe you  just want to be part of a community. We welcome all, this club isn’t strictly on acting, said Larame. “Any skills that you can bring, we accept. Or if you just want to join to make friends and have an experience that’s good too.”