“Activism is like matzah ball soup for the soul and all you have to do to start is pick up a spoon.” 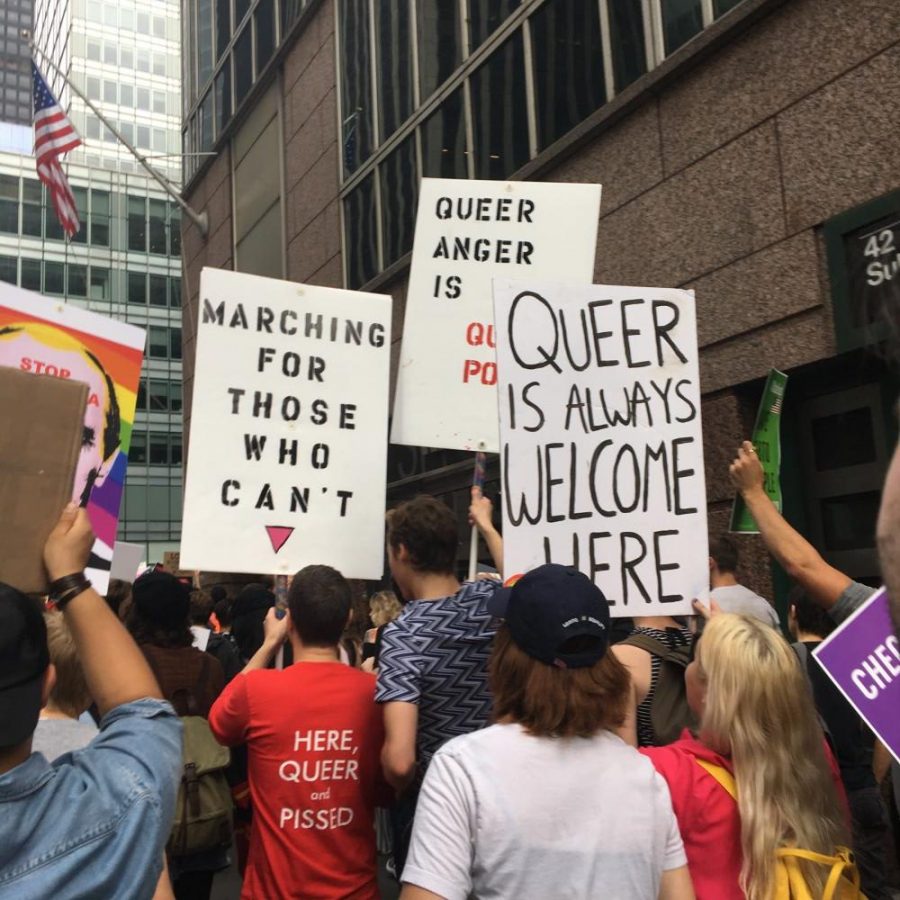 A few hundred demonstrators gathered in huddled masses, eagerly exchanging opinions, voicing angers, and fears. Signs that were professionally made, or made from ripped up cardboard, filled the space above the sea of heads. Those gathered struggled to carry their signs, phones, and flags.

Listening to the crowd, one could overhear people talking freely to one another, even if they had only just met earlier that day. Conversations swayed between eagerness to march and concern for those in Chechnya.

“First and foremost, support for our queer family,” Ashton Muñiz, a New York City based performer, replied as to what his hopes for the Saturday afternoon gathering on Christopher Street would accomplish.

“We must agitate and advocate on behalf of our queer siblings and family in Chechnya, who are under threat, oppression, and are facing murder and torture by the Chechen government,” said Connor Frank, a New York City resident who works in financial services.

Resting near the corner that meets Seventh Avenue is the Stonewall Inn. The gay bar was recognized as a U.S National Monument in 2015 for being the unofficial protesting location of the Stonewall Rights. It has been the final leg of the annual New York City Pride March since 1969, and is the meeting ground for the Voices 4 Chechnya Rally and March on October 14..

Voices 4 Chechnya was founded by Adam Eli Werner in response to reports that gay men were being arrested, tortured, and murdered in Chechnya, a small federal republic of Russia located in the Caucus region. Elena Milashina, a reporter for Novaya Gazeta, an independent and muckraking Russian newspaper, first published an article on the situation on April 1, 2017. A report by Human Rights Watch followed in late May and an in-depth article by Masha Gessen of The New Yorker. 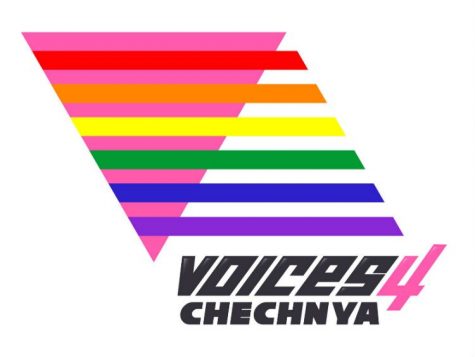 Werner described how he felt when he first learned of the situation in Chechnya after reading Gessen’s article.

“I had a pretty strong gut reaction. I felt like a metal plate vibrated over my head,” Werner said.

A reaction of this kind is not unfamiliar for Werner. After the Pulse Nightclub shooting, Werner describes how he “totally lost it” in the aftermath of the massacre and felt a need to do something in response. He went to the first Gays Against Guns meeting, a LGBT advocacy group for gun control. His work with them was his first time using social media as a tool for activism.

“I very quickly began to start doing all their social media, and I watched a gay group born,” said Werner.

Werner explained his guidelines for utilizing social media for activism, by only posting messages if they are positive or a direct call-to-action. This particular call-to-action appears to have been heard. When talking to those gathered,  a majority say that they learned of the rally and march through social media accounts like Voices 4 Chechnya.

“Everything I do online is either to generate hope or action offline,” Werner said.

While the Pulse nightclub shooting was a main impetus for Werner’s activism today, he also attributes his heritage and family history as another main factor.

“My Jewish identity plays a role in all parts of my life, especially my activism,” he said.

Werner described the tale of his grandparents having to flee the pogroms, the massacres and persecution of Jews in Eastern Europe, during the nineteenth and twentieth century.

His mother, Diane, was an activist in the seventies, advocating attention for the Jews in the Soviet Union who were facing increased difficulties and penalties in attempting to emigrate out of the Soviet Union.

Werner recognizes the parallels of responding to persecution of one’s community with outspoken activism.

“Here I am three generations later with the same story.”

Diane and Werner’s father, Michael, both agree their son was always outspoken, an attribute Diane is happy to see in many others standing with her and her husband at the rally.

“In our day, everyone knew activism worked and I think these days the younger people are just beginning to realize that activism really works.”

“Oh yeah, I’ll definitely yell and hold signs,” Diane said as the rally morphed into the march towards The Trump World Tower. Their corresponding signs of supporting moms and dads around the world who love their LGBTQ kids merged with the bevy of other signs and flags.

Diane’s opinion was possibly confirmed by the makeup of the crowd who listened and cheered to the rally’s speaker lineup, including, Masha Gessen from The New Yorker and Lyosha Gorshkov from RUSA LGBT, an organization offering support to asylum seekers from countries of the former Soviet Union.

The majority of the couple of hundred demonstrators appeared to be under the age of 30. Many of their hands were constantly raised to take snaps and videos. A factor that may have led #Voices4Chechnya trending on Twitter.

“The main thing is we’re bringing publicity to this,” says Nina Zaretsky, a member of RUSA LGBT, as she takes a break in between chanting and filming video.

Her hope is raising awareness in the wider public will cause the Chechen authorities to halt their actions.

“[The persecution in Chechnya] so much in the news, they take pause. This pauses gives them a chance to escape.”

She hopes an escape is available to both men and women, because of Chechen society’s strict gender roles. It is the women’s stories that have the deepest effect on Zaretsky.

“Women cannot just go because they are under control of their families, husbands or fathers.”

While she hopes for relief from persecution she also wants increased action by the United States government and departments charged with foreign affairs.

“[The U.S government] should be speaking up all the time, not just releasing a press release.”

The press release Zaretsky is referring to is the April 2017 statement released by U.S Ambassador to the United Nations, Nikki Haley’s office. The press release read, in part, “We continue to be disturbed by reports of kidnapping, torture, and murder of people in Chechnya based on their sexual orientation… the United States will lead a first-ever meeting on human rights in international conflicts in the UN Security Council to underscore our commitment to addressing human rights abuses…”

The meeting and solo press release on the matter has failed to relieve criticism from the demonstrators that Ambassador Haley and the Trump Administration have not addressed the situation and concerns raised.

“If you’re going to come to our pride parade next year, then do something about it,” says Ryan Duffen, who lives in Brooklyn.

“She likes to talk the talk, but she doesn’t like to walk the walk,” Wilde said. “There’s no action behind her words.”

Haley’s office has not returned requests for comment about her office’s plans regarding future action about the accusations raised against the Chechen government or responded to the demonstrator’s criticism.

While  Haley is criticized for a lack of attention, the rally and march has drawn the focus celebrities like Dan Donigan, better known as Milk from her stint on RuPaul’s Drag Race Season 6 and as a model for Marc Jacobs.

Milk came to know Werner after meeting during a protest in front of the Russian embassy. Subsequently, he became deeply involved in Voices 4 Chechnya. He was interviewed alongside Adam for Mic and promoted the demonstration to his over 600K followers on Instagram.

“If somebody is attacking my queer brothers and sisters and gender non-comforming individuals elsewhere, it is my responsibility to make it better for them,” she said.

As Milk talked in between, leading the marching demonstrators in chanting, “No murder, no hate,” she expressed gratefulness in lending her platform to the cause he and others were marching for that day. “It is important to share this message and I’m happy that I could do so.”

It was a sentiment shared by many of the protestors who live close by in Brooklyn and as far away as Russia.

“We would like to stop what’s [happening] in Chechnya and in Russia. We can’t do anything, but we can at least do something. Maybe one day it will be possible,” said a protestor going by Vicky. She and her friend Polina who were visiting the United States for ten days from Moscow.

Russia has received prior attention for its record on LGBT rights. Russia enacted a law in June 2013 that banned displays of “homosexual propaganda.” The law has raised accusations of its use to ban demonstrations in favor of LGBT rights and expression of homosexuality in a positive manner, which has prompted protests of Russia hosting the 2014 Sochi Olympics and the European Court of Human Rights to rule the law discriminatory last June.

“In Moscow it’s okay, but not okay like New York,” Vicky said on her attitude towards LGBT people in Russia. Polina and Vicky say the Russian media does not report on accounts of torture and persecution of LGBT people by Chechen authorities.

When asked if they believe these events in Russia and Chechnya can be stopped, Polina empathetically responded, “We really hope so.”

The sense of hope led some to demonstrate for the first time.

“Not that the Women’s March or the Climate March weren’t important, but this just really hit home and so I felt it was important I come out here,” says Justin Galicz, a graphic designer originally from Brooklyn, who came out only three years ago.

In contrast to others, his friend, Chloe, who has been politically active since college, was determined to be at the demonstration. “I think human rights dies in silence, so I think it is important to be out here and be heard.”

The more politically active and those new to public demonstration merged freely with the marchers. 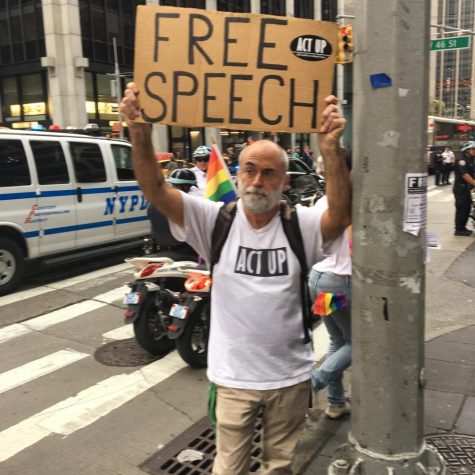 “I’m not really an activist, but this dark chapter in human history leaves me no choice,” said Michael, a college professor.

Michael was marching not far behind a man from ACT UP NY carrying a sign that read “Angry Pacifist” who said he has been demonstrating for twenty-seven years.

While many of the demonstrators were between the early twenties to early thirties, there was a message for those even younger than them.

“Don’t wait to take part in the conversation,” offered Milk.

Werner noted how many of the members of Voices 4 Chechnya were still in college.

“We have a huge amount of college students and I would say all you have to do is follow us on Instagram and join us at a meeting.”

Bailey Guess and Jay Prierls, freshmen at The New School, were walking close to the front of the march, only a couple of blocks from their final destination: The Trump World Tower. While it wasn’t the most traditional setting, the pair just so happened to be on their first date.

As Guess described it, “I was going to come to this anyway and the date went so well, I asked them if they wanted to go.”

“We were just going to meet up for tea and then we were like ‘let’s go to a rally,” Prierl’s said, finishing the story.

The rally was not a first for either of them. Guess participated in both the Women’s March and March for Science. Prierls says she has been politically active since she was thirteen.

Prierls described that her one sibling is also gay, while her other, is transgender. The siblings have identities that have not stopped their parents from loving them, which has added to their motivation for marching.

“I want to help people who don’t have that luxury.”

While this is their first march, it won’t be their last, as they were both clear there will be another demonstration to attend.

As they made the final steps of standing in front of the Trump World Tower, Prierls said, “I could be tired and lazy, but I will still go.”