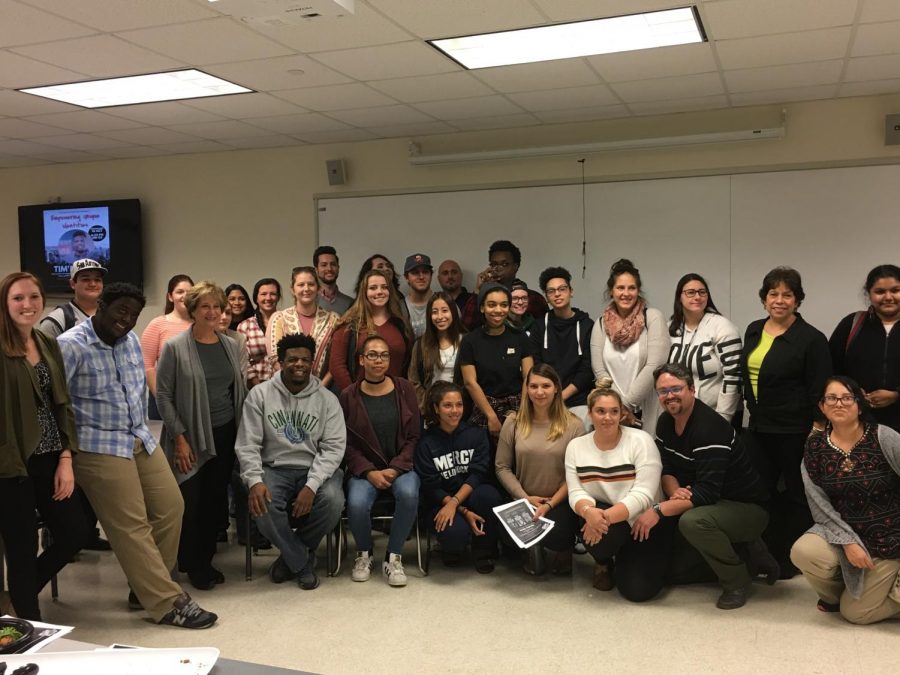 Mercy College invited speaker Tim’m West for a captivating discussion on the intersection of race, gender, sexuality, and social justice on Oct. 18.

West, recognized as being the recipient of the 2015 LGBTQ History Month Icon, is also an educator, poet, youth advocate, and hip-hop artist.

West was just one of the first speakers of three for the semester, in what the faculty calls the “ism” series. Mercy’s plan is to bring speakers who each shed light on sexism, racism, and ableism.

Mercy was awarded a faculty senate micro-grant from the state for this three-part speaker series. This new speaker series was a partnership between Dr. Jack Simons of the School of Social and Behavioral Sciences, Dr. Ilene Rothschild of the School of Education, along with Molly McCabe and Alyssa Seidel, from the Office of ACCESSibility.

At the end of the last school year, Simons met West at an “LGBT People of Color” conference, and believed he would be a great candidate for the inspiring speaker series.

Faculty such as Felipe Henao, Director of Student Life, was also present to engage in conversation with West alongside the students.

West started his presentation by recognizing his inspirations, specifically LGBT people of color. He recited multiple excerpts from their poetry.

He began his speech by mentioning his childhood in Little Rock, Arkansas after the laws of segregation were lifted. He also talked about how many children at the time didn’t understand proper terms along the lines of sex and sexuality.

He also discussed his struggles living in poverty and how he didn’t know he was poor until he met people of higher means. 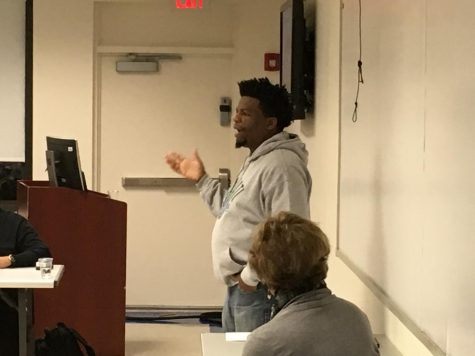 West identifies himself as a queer person.

West then revealed his diagnosis of AIDS in 1999. Soon after finding out he was HIV Positive, it was part of the inception for his first book, Red Dirt Revival: a poetic memoir in 6 Breaths (2003).

He originally decided to name the book “suicide journals” because of the multiple suicide attempts he engaged in, mainly regarding his sexuality and racial oppressors.

West also made sure to point out to the students that not everyone will have that compassion for others.

“Who we assume connects with us doesn’t always connect with us.”

This can be with regard to any career path students take. There will always be people who will connect with one’s work.

“Tap into the first moments when you think about who you are and your ideologies,” said West.

“Know your students on a personal level,” said West to the educators in the room.

He also wanted all to trust in themselves, especially as young people. He spoke about how important it is to be brave and vocal about multiple topics, such as racism and rape culture.

West makes it evident that people only understand what they know, and that he wished many others were  open to being educated about the truth. West also pointed out how he was the first in his family to do this, by breaking the “culture of silence.”

“Operate with grace for people who are willing to heal and have open minds,” stated West.

West also encouraged millennials, such as Mercy students, to run for office as one of the proper and most effective ways to create great change.

He revealed his favorite hip-hop artists, dead or alive, some being notable rappers such as ASAP Rocky and Kendrick Lamar. This was very pleasant topic for West, as he is also a hip-hop artist among his many occupations.

Elise Turley, junior at Mercy College, says she is now “more aware and conscious of who is around,” after West shared his personal experiences with racism.

As an honors student in the School of Business, Turley attends at least two campus events a semester. At first, she decided to attend West’s speech for the sole purpose of fulfilling her requirements as an honors student. After leaving the event, she related more to West’s inspiring experiences than originally anticipated.

Turley is looking forward to attending the next presentation in the speaker series.

There are still two more speakers in the series to present this semester.Artist Brianna Beck is set to arrive on the Dobbs Ferry campus on Nov. 13 from 4 p.m. to 5:30 p.m. in Main Hall RM 364. She is set to have an interactive discussion on art, disability, and ableism.

The last speaker in the series, Darnell Moore, is planned to arrive at the Bronx campus on Nov. 16 from 5 p.m. to 6:30p.m. He is set to have an engaging discussion on race, marginal identity, and social justice. Moore also happens to be on the cover of West’s first book as earlier mentioned.

West concluded his presentation with a monologue that ended with a cliff-hanging statement.

“If you’re an ally and nobody knows it, then you’re not an ally.”