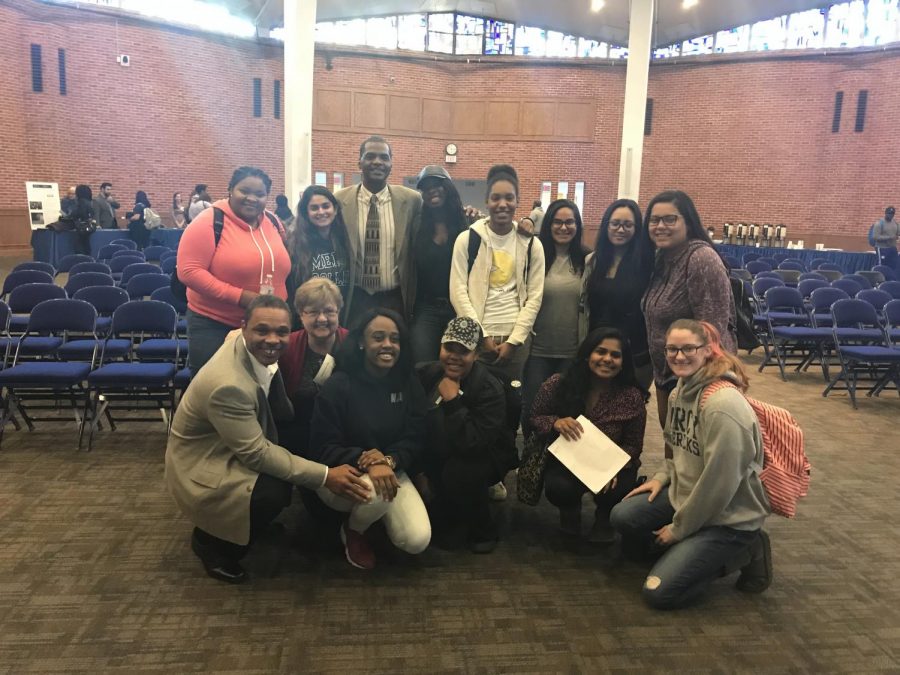 It’s not uncommon for individuals to find sanctuary through the arts. Whether it be through painting, singing or writing – creativity becomes an escape. For former Sing Sing inmates who doubled as Mercy College graduates, acting was their creative outlet throughout their time incarcerated.

Following the School of Liberal Arts theme of “Time,” there was a screening of “Dramatic Escape,” a documentary film which follows the journey of Sing Sing inmates while they create the theatrical production of A Few Good Men through the Rehabilitation Through the Arts program, on Oct. 19 in the school’s Rotunda.

“I’m excited to explore the theme of time with this event,” said Dr. Tamara Jhashi, Dean of the School of Liberal Arts, during the opening statements. “Liberal Arts rallies around the concept of time.”

“Dramatic Escape,” which was released in 2015 by Goldcrest and Saboteur, is a 94-minute film that shows every aspect of the Sing Sing inmates production behind bars. From the casting process to callbacks to set design and rehearsals, this documentary shows how the inmates can put on a full-fledged production through the RTA program.

The RTA program was started in 1996 as a small theatre group in Sing Sing Correctional Facility. This program uses theatre, dance, music, voice, creative writing and visual arts as tools to teach critical life skills. It also provides a safe space for prisoners to express themselves honestly and artistically, according to the organization.

This documentary also tracks the journey of Clarence Maclin after he is released from the correctional facility. While he’s not an actor in the play, he’s a key part in the decision-making process and set design.

In the beginning of the film, with a slight introduction of some inmates, it is stated that Maclin has 175 days until his release.

“People from the RTA saw me as something else, something more than just an inmate,” said Maclin.

He also stated that, “[members of the RTA] don’t treat me like they’re scared of me and that’s what made me want to learn more.”

As the film progresses through the casting process and play rehearsals, it touches upon the complications that come with producing a play behind bars.

“Just to bring in masking tape there was so much paper work,” said one volunteer for the RTA program. “I’ve been trying for three days now since a lot is contraband.”

The inmates also touched upon a few fights that have happened during the production. But some state that they typically get along for the sake of the RTA program.

The film takes the audience through all the trial and error and opening night jitters that come with a theatrical production. A Few Good Men was performed twice for the prison and once for a civilian audience.
“Sing Sing has the toughest crowd,” said Maclin. “They’ll let you know if they don’t like it.”

The day before opening night, Maclin finds out that his sentence has been lengthened for another 40 days due to a mix up with paperwork. While he was upset, the RTA program and the camaraderie that comes with it helped him through this hard time.

“I feel that A Few Good Men was chosen to show that there are a few good men here,” said Maclin.

“My family is the RTA – these are really my people,” said another Sing Sing inmate.

To end the film, Maclin’s release from Sing Sing after his 40-day extension was shown. The former inmate raises his arms and pounds his chest in excitement.

At least 100 RTA members have been released or paroled, and only three have returned to prison, according to the organization.

After the screening of “Dramatic Escape,” there was a discussion with a six-person panel made up of three former Sing Sing inmates and three members of the RTA program.

The three former inmates, Clarence Maclin who was featured in the film, Charles Moore and Robert Pollock have all obtained degrees from Mercy College through the Hudson Link program and have benefited from being with the RTA.

“It’s always tough to watch this,” said Maclin. “But at the same time, I’ve created something we can look back on. Everyone in RTA can relate to each other and that’s special.”

Maclin obtained an Associate’s Degree in Behavioral Psychology from Mercy College. After his release, he also took a few classes at the Dobbs Ferry campus where he learned how to properly use a computer.
“I felt so welcomed by all my classmates,” he stated.

Charles Moore, who is the first RTA alum to be hired to work full time in the RTA office, holds a B.S. in Human Services from Mercy College. He stated that Mercy College is the only college in the Hudson Link program that puts the names of Sing Sing graduates on the commencement pamphlet.

“That’s very important,” Moore stated. “People in prison are just good people who made bad decisions. Judge us for who we are today.”

Ricki Gold, Director of Development for the RTA program, stated that they said yes to a documentary because she wanted to shed light on the program.

“We felt that this would be a game changer for us,” she said.

The last inmate, Robert Pollock, also holds an Associate’s Degree from Mercy College that he obtained during his eight years in Sing Sing.

“The feeling of coming back to Mercy makes me feel like I’m at home,” said Pollock. “I may have never felt comfortable on a college campus if it wasn’t for Mercy. Education is definitely a leveling field and the RTA brings that to inmates.”