The Power of Getting Stoned

Many are turning to holistic healing methods such as rocks, gems and minerals 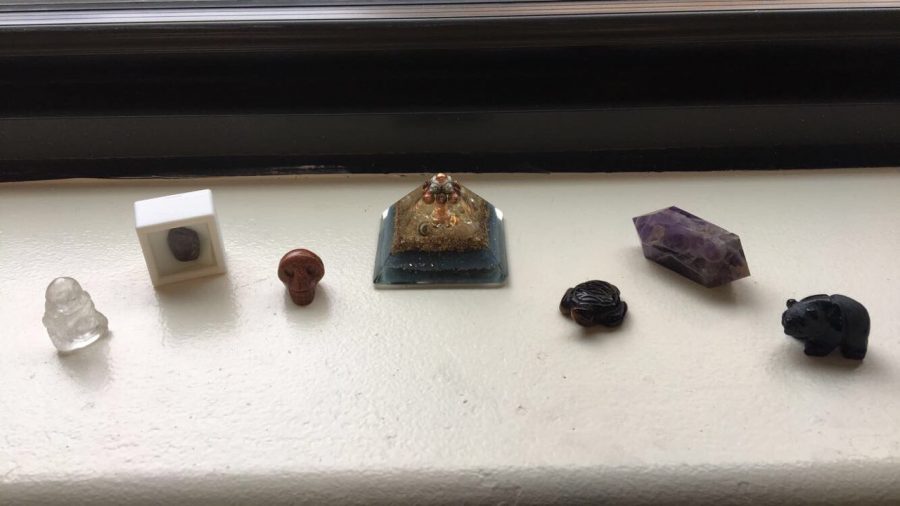 They say getting stoned can help heal all kinds of medical problems, but can it really?

Don’t be mistaken, though, while our nation is steadily moving towards legalizing getting stoned in the traditional sense, the more holistic method is perfectly legal right now. Gemstones and crystals have become a rising trend in the search for natural healing.

People who practice holistic healing through crystals do not put much stock in conventional medicine. Rather, they believe in a much more spiritual way of healing their physical and mental ailments.

Holistic medicine uses the belief that a person’s mental and social status are just as, if not more important, than the physical symptoms of a disease. This belief has spawned many forms of remedies under the umbrella of holistic medicine.

These remedies range from more universally known types such as aromatherapy and healing crystals to newer resources like Himalayan salt lamps and Orgonite. There now exist a plethora of online as well as brick and mortar shops that have taken up the job of selling holistic medicine, however, if you wanted to experience multiple types of holistic medicine in one location, the “Healing Rocks, Gem & Mineral Show” in Fishkill, New York was your best bet.

The convention was bustling with eager vendors and crystal enthusiasts both young and old. For these people, holistic medicine is much more than a hobby. For many of the vendors, they ran their own businesses through Etsy pages or personal web-stores to sell their rocks and charms.

One vendor, “P Lily Designs” was run by a woman who referred to herself as “Jane the Rock Gal.” Jane was selling Orgonite and various glass pyramids that contained multi-colored sand and copper.

“The copper is important. It’s what absorbs the negative energy and turns it into positive energy to help people live healthier lives,” said Jane motioning towards her product.

Jane explained that to utilize the stones, one should place the Orgonite next to you on a desk while you work and let the stone do its work.

“Orgonite is also good to use next to your laptop since it can protect you from the harmful radiation given off by your computers,” she added.

Jane didn’t come up with the idea herself, however, she insists that the qualities and uses of Orgonite are a scientific field that now has much research behind its uses.

“There is a lot of scientific research behind Orgone, you can look up a lot of this stuff online. It’s not voodoo, its science. It’s all Einstein. Not a pseudo-science, just science,” Jane said.

She’s not wrong. Orgone did have an original founder in the form Wilhelm Reich. According to the American College of Orgonomy’s official website, Orgonomy.org, Reich allegedly discovered a power known as orgone in the atmosphere, however when he began creating the tools to harness that power he ran into problems with the FDA. After refusing to demonstrate his findings to a court of law, a lot of his research was subsequently destroyed. As for Jane’s Einstein claim, the two scientists did appear to have interactions, however not much could be found outside of the Orgonomy-related websites.

While Jane showed a lot of enthusiasm for her Orgonite, the students of Mercy College did not. When shown the Orgonite Pyramid, most people did not care much about it or only thought that it looked aesthetically pleasing.

“It freaks me out and makes me feel sick. I don’t know what it is, it just looks weird,” Brauer said.

The cheapest piece of Orgonite at the convention ran for $39.

There were other charms and trinkets available as well. Bob Mann was in attendance selling his Himalayan salt lamps for the “The Holistic Healing Studio” group. The lamps are made from Himalayan salt and resemble giant slabs of salt with a light bulb built into the center.

According to Mann, however, Himalayan salt wasn’t just used in the lamps.

“We use Himalayan salt in a lot of items like candles, tiles, night lights, and other detox items,” said Mann. According to Mann, the salt lamps use the heat of the bulbs in order to activate their healing properties.

“Through heat, the lamps release negative ions which negate positive ions. These are extremely useful since your TV gives off positive ions, so you’ll feel better as a result of using these lamps. In fact, you can go online and find a bunch of stuff out about Himalayan salt,” said Mann.

According to Livestrong.com, a health website, Himalayan salt had over 84 minerals and elements that are supposed to be vital to human nutrition. However, this only applies to generally consuming the substance and not turning it into a lamp, it claims.

As for the claim that the lamps produce negative ions, well that one is a bit more difficult to explain. According to Negativeionizer.net, the lamps do give off negative ions. However, the lamps do not give off enough negative ions to produce any form of positive effect in terms of one’s health. In fact, the main health benefits these lamps give off is the fact that they do clear the air by absorbing harmful particles in the air.

Despite there being some truth to Mann’s claims, once again the students of Mercy college were not impressed. While some people claimed to have their own Himalayan salt lamps, most only bought them because they looked cool. Not a single owner knew anything about the supposed healing abilities of the lamp.

When the Himalayan salt lamp was shown to Isaiah Montanez, he was unimpressed.

“To me, it just seems like a placebo effect. If people believe it’s going to work, then they’ll think it will work. I personally think it’s all a lie,” said Montanez.

While all these types of holistic medicines were generally unknown to the public, everyone has heard about the wonder that is healing crystals and rocks.

A large number of rock vendors at the market eclipsed all the other forms of medicine. They had dozens upon dozens of different types of rocks and minerals on display. Some sold their minerals in the purest state possible while others put their stones into jewelry. Some were giant slabs of material while others were sculpted into little statues.

Each stone had its own healing properties listed on it along with a booth manager who would gladly tell you about each and every aspect of the stone. Along with these descriptions came the price tags with a pebble-sized stone costing $15 and the sculpted ones costing a $100.

Despite the overwhelming size of the healing rock and crystal market, the lack of faith continued throughout the college as the licensed mental health counselor Alyssa Prete revealed her own connection to holistic medicine. That connection being in the form of aromatherapy, the use of certain scents to help calm people’s nerves.

“I use aromatherapy, which is considered a form of holistic medicine. I believe it has some uses to it, but not on its own. Things like yoga, meditation, and aromatherapy need to be used alongside medication and professional help.”

Prete has been using aromatherapy for her own personal use for five years and believes it’s much more effective than any crystals.

“I don’t believe in the healing crystals. Some people come to me asking about them, but most of the time they just seem confused. They don’t know what they are looking for,” said Prete.

Prete also feels that her aromatherapy had scientific backing while the other forms of holistic medicine were less substantive.

The scientific element has always been the touchy subject behind everything shown at the festival, for everyone there also claimed to have some form of scientific backing. Yet upon closer expectation, most of those claims are either false or prove to be lacking in substantive research.

“I feel that when people think aromatherapy, they think holistic which doesn’t usually bother me. However, I do understand that some people see holistic medicine as a bit hokey and might be drawn away from trying aromatherapy. That does bother me a bit since I feel it has some form of use.”