Students Create Note Board To Promote Awareness About Domestic Violence 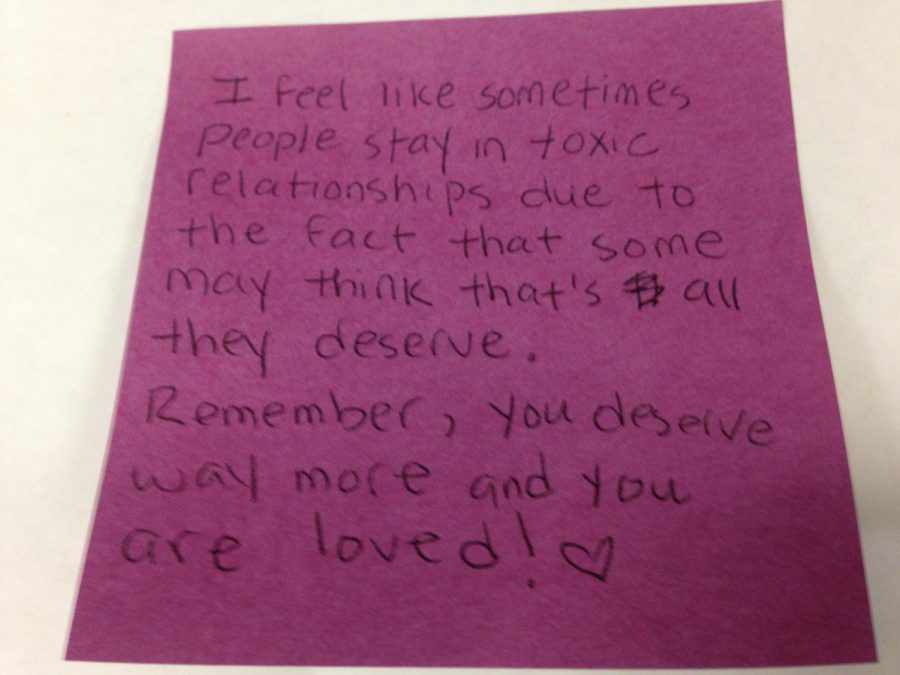 A large poster board towers above students hurrying through the busy passageway beside the cafeteria. Dozens of colorful Post-It notes adorn the once white board displaying thoughtful messages of hope, solidarity and understanding.

October is Domestic Violence Awareness month, and students at Mercy were encouraged to write down their thoughts on why they believe victims of domestic abuse stay in unhealthy relationships and put them onto Post-It notes to create one large display.

For one week in October, Mercy held numerous events for students to participate in, and to educate them about the important issue. It was Student Life’s hope to allow the students to participate in activities in order to raise awareness and disspell common myths surrounding domestic violence. The week’s events were kickstarted by a guest speaker named Kimberly McNair who visited Mercy to engage with students about the struggles and options students who find themselves in abusive relationships may be faced with.

Students also held a bake sale to raise money for national organizations that help and support victims of domestic abuse, and a demonstration was organized that urged students to come pledge their support against domestic violence by letting purple balloons loose into the field on campus.

Domestic violence is a common issue in relationships between people of any age, but for college-age students, it can quickly become a troubling situation that individuals may not be equipped to deal with.

Abusive relationships form when one partner attempts to maintain power and control over the other partner through intimidation and patterned tactics that includes physical, psychological, sexual, economic and emotional abuse. It is a cruel and ongoing abuse that deserves to be given the proper care and attention especially at a college level.

In order to get students to learn about this epidemic, they were urged to participate in the many campus events promoting awareness, including the Post-It display.

“Domestic violence is something that is very much swept under the rug in today’s culture. It’s something we necessarily do not know too much about and what actually is domestic violence. Domestic violence is a bigger than most realize and it affects everyone,” says Shakin William, a sophomore at Mercy College and the co- president of the Blacks Communion. He came up with the idea of this event. The issue hits close to home, as he revealed that his mother was at the receiving end of a toxic and abusive relationship for 20 years.

“My mom is a survivor, so I know first hand what makes someone stay in a abusive relationship,” William said. “One of the main reasons my mom and I stayed for a long time is because she wanted something better for her children. My mom grew up in a low income situation, so she saw that as a way out and a way to better her children, but eventually it got to a point where she couldn’t take it anymore.”

William expressed just how serious an abusive relationship can get, explaining that at one point, his mother feared for her own life.

“The breaking point was when she was almost about to die,” William said.

“A lot of domestic violence starts at a young age. We are bringing awareness now to try to stop domestic violence. It’s a way to prevent a future abusive relationship. A lot of abusive relationships carry on from a younger age, and I notice that as whole, so if I’m able to cut it down right now I could potentially try to end it further down the road,” informed William.

“We want to raise awareness as a group because many people talk about domestic violence and being in a harsh relationship. Majority of the students go through domestic relationships when they are in college. Many don’t have someone to turn and talk to about it. If you raise awareness, it helps people know where to go,” explains Adams.

The event had over 100 signatures near the end.

Some theorized that victims stayed in abusive relationships out of fear. Others blamed a lack of self-esteem or believing they weren’t “good enough” for anyone else. Then, sadly others revealed they still have love for their abusive partner, and they have hope that circumstances will change.

“A lot of people are scared, and [the people that I know] stayed because they had children and couldn’t raise them on their own. That plays a big role,” Adams said.

During the event, they sold baked goods and handed brochures for the Hope Foundation. The Hope foundation provides resources for people who are in an abusive relationship, and reassurance that they have options.

“We do have resources–from Hope’s Door to My Sister’s Place. There are many domestic violence awareness shelter within the local area. I suggest staying close to friends and family no matter what. If you are a friend of the opposite sex, show them how they should be treated and what a proper relationship should be,” William suggests.

William’s suggestions may seem small, but they can have a significant impact on those who find themselves on the verge of an unhealthy relationship.

For those who may be concerned about a friend or family member, there are many warning signs of domestic abuse. Signs include embarrassing a person in front of others, controlling what one spends, says or wears, denying one access to money or assets, blaming a person for everything or accusing them unfairly of being unfaithful. Other signs are forcing a person into sex, preventing a partner from leaving, abandoning one in an unsafe place, making threats to a person or his or her loved ones, and hurting pets,

There more extreme signs involve physical violence such as shoving, hitting, slapping, punching or otherwise hurting them. Look out for signs of emotional distress, having bruises, not smiling, being distant and appearing depressed as signs of abuse as well.

In the end, all these abuses usually end up with the victim becoming isolated from everyone else, say experts.

“Go to therapy, lean on family and friends, go to centers like Hope’s Door and call their hotline,” says Adams. “They let people know that they aren’t alone, they are loved,  and that they will help them.”

Hope’s Door seeks to end domestic abuse and empower victims to achieve safety, independence, and healing from the abuse. If you are in an abusive relationship or know someone who is, please call Hope’s Door free and confidential hotline (888) 438-8700 or visit their website www.hopesdoorny.org.