Why We Wear Pink

Mercy educates students of the risk factors of breast cancer 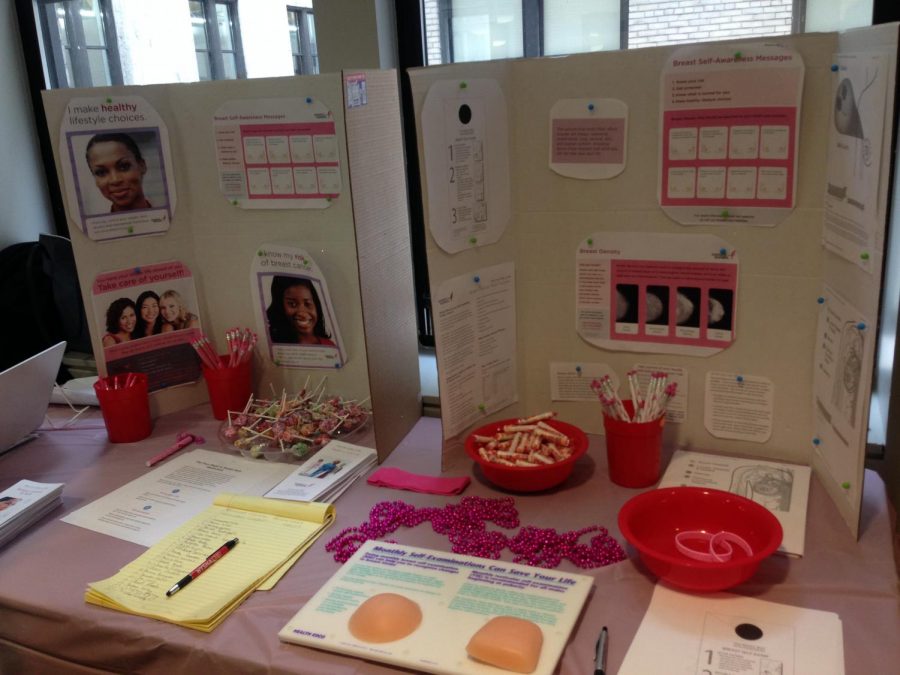 Imagine being so educated about a cause that you could potentially save a life. That’s what some students of Mercy College wanted to do, learn about breast cancer in order to save their lives or someone else’s. Learning about breast cancer and showing up to events that educate you on your health is the first step to raising awareness on it.

To explain briefly how someone may get breast cancer, cells in the body normally divide, grow and die, but someone with breast cancer will have cells that divide and grow but won’t die; instead they grow out of control. The amount of growth these cells produce are enough to form a mass or a lump which is called a tumor. Tumors can be malignant which means cancerous or benign which means not cancerous. Malignant tumors are large enough to be felt. Non-invasive breast cancer grows inside the milk ducts but doesn’t spread beyond where they are or to nearby tissue. Invasive breast cancer spreads from the inside of the milk ducts and surrounds the tissues. Metastatic breast cancer is not a type of breast cancer but a stage of disease – it spreads in the liver, lungs, bones and brains. To treat it, a patient must have surgery, chemotherapy or radiation therapy.

Regina Odell, who is a graduate student in the nursing education field, was one of the nurses who taught the students about breast cancer. She is at high risk of getting breast cancer not only because of her age but because her mother had breast cancer; she has had a mastectomy and has since been cancer-free for 20 years. Last year, Odell did a breast cancer awareness event with another student and realized that not many young females believe they will get breast cancer. This prompted her to have another event this year regarding breast cancer and raising awareness.

“Unfortunately the statistics state that one out of eight females get breast cancer. If you are in your twenties or thirties, you are at a high risk of getting it. A lot of girls are diagnosed with more advanced breast cancer because they are not checking themselves and their cells are growing quicker. So it’s pretty advanced by the time they find it,” informs Odell.

The four steps to breast self-awareness is to first know the risk and talk to one’s family about their health and background. It is very important because if someone in the family has had breast cancer, the chances of getting it are increased. Second, is to get screened. If one is at a high risk of getting breast cancer, it’s crucial to ask the doctor for a screen test. Every three years starting at age 20, it is important to have a clinical breast exam.  At the age of 40, women should have a mammogram annually. Third step is to make healthy lifestyle choices. Such as maintaining a healthy weight, exercising as much as one can, limit alcohol and postmenopausal hormone use for female. Making choices to lower the risk is important. Weight gain of 20 pounds or more after the age of 18 may increase the risk.

Last step is to know what is normal for one’s body. If one sees anything abnormal in breast, then seek help. Signs are having hard knot or lump inside the breast or underarm area, changes in the shape or size of the breast, dimpling or puckering of the skin, and suddenly having nipple discharge. Other symptoms may include swelling, redness, darkening or warmth in the breast, sudden pain that doesn’t go away, pulling in of the nipple or other parts of the breast and getting a rash, itchy or scaly sore on the nipple.

“Check yourself. Know what’s normal and what’s not normal. If you see something or feel something that isn’t normal, you should get it checked fast. Don’t wait. Don’t ignore it,” advises Odell.

Breast cancer is the second most common cancer in women. Although it occurs more on women than men, it can happen to men. The chances of men getting cancer are 1 out of 1,000, but that doesn’t mean that they shouldn’t be aware of the potential risk factors.

“Guys have breast tissue too, so they should be running their hand against those breast tissues in case they feel a lump. Men don’t really think about it, but it happens. The reason why it doesn’t affect men as much as women is because of hormonal changes. Females go through cycles every month which go up and down. Guys don’t have hormonal changes and have less breast tissue,” Odell says.

The students were told the many risk factors of breast cancer in order for them to know what to makes them at high risk of getting it. Risk factors are abusing alcohol, being part of Ashkenazi Jewish heritage, lack of exercise, inherited BRCA1 or BRCA2 gene mutation, exposure to large amounts of radiation at a young age, family breast cancer history, having ovarian or prostate cancer and getting older. Other factors are being a women, being overweight or having a weight gain after menopause, using birth control pills, using menopausal hormones, ductal carcinoma in place, high breast density on a mammogram, hyperplasia or lobular carcinoma in place (LCIS), never having children or having a child after the age of 35, not breastfeeding and having menstruation at a young age or menopause at an old age.

While these are high risk factors that may trigger breast cancer, if all these factors are not present,  a tumor in the breast is still possible. Breast cancer has no limitations and will target anyone. There isn’t one particular issue that can cause it. It can be treated, but raising awareness is the first step to know about this deadly disease.

“If you’re not taking care of yourself or diagnosed with something like this then it dramatically changes the entire outcome of your life. We have to support each other. Tell others to take care of themselves and telling them to not stress out and be aware of their bodies. We can save somebody from of lifetime of illness or young death,” said Odell.

About 100 students on the three campus came to learn about this cancerous disease. Many had a personal story to tell in which they knew someone who had breast cancer whether it was a family member or friend. The students don’t want to be part of the statistics so they willingly came to the event to learn about breast cancer and how to prevent it from happening to them. The students were handed bracelets, candies, pencils, pen, necklace beads as well. It was also a way to attract students to come to the desk and learn about breast cancer. Pamphlets were distributed with many resources and information regarding breast cancer. They also showcased two posters filled with pictures and statistics. They had a breast lump displayed for men and women, so either gender could feel and know what they should be checking for when they are doing self-examination.The nurse showed them the size of the tumor from the early stages to the last demonstrating the size with coins. The size of a large quarter was the biggest and the size of a penny was the smallest.

“Hopefully this event makes them more conscious and aware. We are responsible for our own health, and nobody is going to take care of you better than you. I think if we can get a lot of people to just be aware, prevent or catch a tumor earlier, they have a better chance of treating it and surviving the cancer,” says Odell.

To learn more about breast cancer go to Susan G. Komen or visit their website komen.org. Resources such as American Cancer Society and National Cancer Institute are also prominent.