“Even if you’re not directly experiencing this or your relationship is perfectly fine this is still an issue that is out there.” 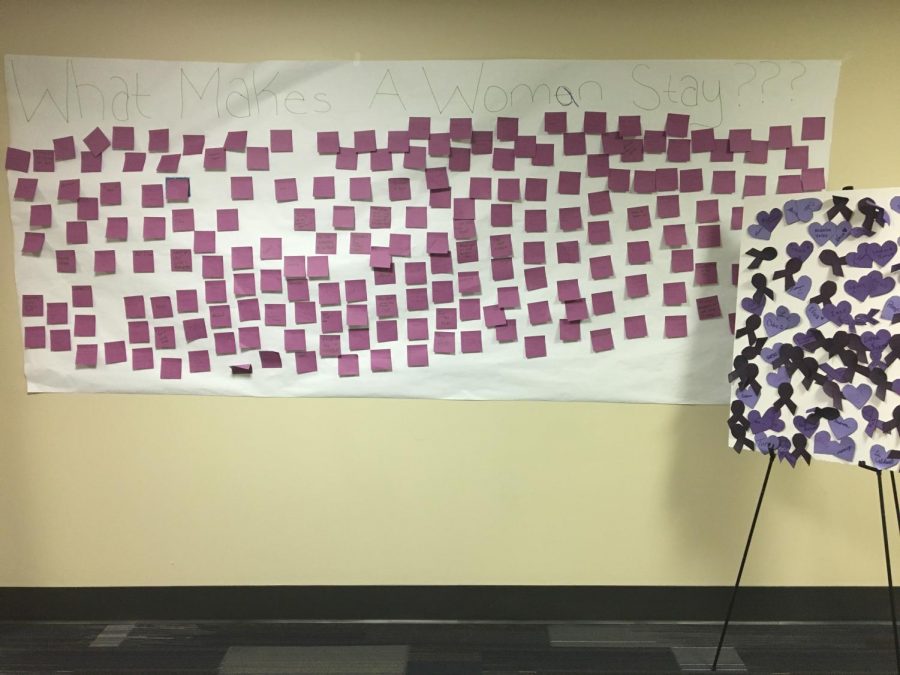 Shakim Williams was passionate about sports from a young age. One of the hallmarks for any young athlete was practices late at night. He remembers sitting in the backseat waiting to go when his parents started arguing.  His dad did not want anyone going anywhere that night. He wanted to him to stay at home.

His mom, Raleighn, saw the passion in her son and was defiant. Her night blindness was the last impairment between her driving her son to his practices. She struggled to see the features in front of her car’s high beams – the high beams Williams’ dad never taught her how to turn on. Williams’ sister, who was good with cars, reached out her hand and said, “Here. Turn this on.”

The blue light flashed on the car dashboard. Her eyes went wide, shocked at what he car could do.

“Part of the control factor,” said Williams, a sophomore marketing major, as he retells the story, his voice lowering gently in volume as more and more words are spoken.

It was another memory of witnessing his mom suffering at the hands of his father, starting when he was around age seven.

Waking up in cabs because his mom’s car was in his dad’s name. Spending nights in shelters with his mom sleeping over him because they couldn’t afford a hotel that night, and his father trying to turn him against his mother.

“She felt she had to deal with the abuse to make sure her kids had a better life than she did.”

It’s his personal experiences that motivated him as Co-President of the Black Student Union to have programs and events for Domestic Violence Awareness Month. A project that began in early to mid-September culminating in a speaker event with experts and leaders from Hope’s Door and My Sisters Place. Also, it organized a bake sale and included a pledge by students to support victims and survivors of domestic violence symbolized in purple hearts and ribbons. The hearts and ribbons rested on a standup display next to the “What Makes a Woman Stay” Display.

The displays focus on the complex reasons survivors of domestic violence stay on full display, with all the post-it notes resting on a large piece of paper, hanging on the wall outside the Mercy College Counseling Center. Notes left by students share a range of reasons, including, fear, invested time, and “She believes that’s the love she deserves.”

“We are all grateful to the students who shared their own experiences of abuse. I know it takes courage to do so, this courage inspires those of us who witness it to give the issue of domestic violence the attention it deserves,” said President Tim Hall.

The emotions and experiences expressed are not unsual to the Kym McNair, Coordinator of Community Education and Engagement for My Sister’s Place, a speaker at the event the Black Student Union held. “[Survivors] have to take the risk of people not believing them.” She adds the survivors may have their experiences minimized or discredited.

Reactions became visible on the “What Makes a Woman Stay” Display since it went up. The display has had several crude and disparaging messages posted or directly written on it.

This kind of reaction has irritated Williams’ staff, especially his Secretary, Darnell Hargett. “One person was ripping [the notes] on the spot and everything,” as Williams retells it. It is a frustration he understands as someone told him, “Look in a position like this you have to deal with people’s ignorance.”

“There’s a standard level of respect a person should have for domestic violence and the activity we held to bring awareness,” says Hargett. 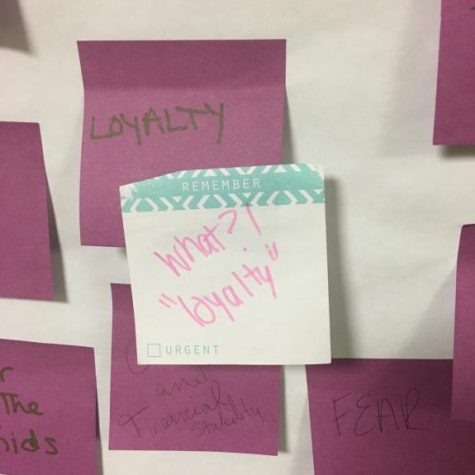 This was a sentiment shared by Toni Pellegrino, a clinical laboratory science major in her fourth year, who noticed on a Friday night, October 27, when passing the display one of the notes left. It read “What?! ‘Loyalty’” directed towards another person’s post-it note. The person’s actions left her deeply offended by the degrading of the display made directly against a person sharing their why. “(They) treated the poster like an internet post.”

She added, “The poster is there to start conversations, but not that type of conversation.”

Starting conversations is partly what motivates Kristen Orlando, Prevention Program Coordinator and Domestic Violence Counselor for Hope’s Door, believes it is important to start raising awareness at a young age by talking to middle and high schoolers about how to recognize red flags of domestic violence and abusive relationships. “A lot of teens don’t even know it is abuse.”

It is a sentiment McNair shares and attributes to both the survivor and the people in their personal or social orbit. “I think a lot of times people are unaware because we’ve been socialized to look for a particular kind of violence. If it’s not physical or sexual, we tend to overlook it or sometimes minimize it.”

According statistics compiled from Love is Respect and shared by Campus Safety Magazine say “one in three adolescents in the U.S is a victim of physical, sexual, emotional or verbal abuse from a dating partner…”

McNair and Orlando both recognize that obstacles that keep adolescents feeling safe from their abuser are heightened in college. The greater independence, less personal space, and finances involved increase the complexity of each situation. An observation Alyssa Prete, a licensed mental health counselor for the Counseling Center, shares. “You’re in this community, so you don’t necessarily have the space to get away. The abuser might be in your classes or you might live in the same dorm as them.”

Prete cites the additional issue of an abusers’ friend group unwittingly taking part in the student’s abuse. “It is the friends that have been manipulated into trusting the abuser. Giving the survivor threatening looks on campus or spreading rumors about them.”

Circumstances a survivor potentially faces and may drive them towards wanting to transfer to another school. A difficult choice when remembering the invested time in applying and choosing a college and potentially losing awarded scholarships.

“How much of my life do I have to change because this person continues to use tactics of abuse against me?” is the question McNair says survivors face.

Prete has supported students in managing difficult circumstances which makes having to remove or hide disparaging notes left on the display more upsetting.

“It’s frustrating. It’s really disheartening,” she said as she describes a day after having to help draw a very visible blackened square over someone writing that is offensive.

Hall added at the event, “Joking about domestic abuse isn’t funny. It discourages victims who ought to be protected.”

Prete is not alone in covering up other comments, including, “because he wears magnums.” Pellegrino several days after noticing the “loyalty” comment covered up another saying, “When she has no doubts –“ with “Feeling like she somehow deserves it.” 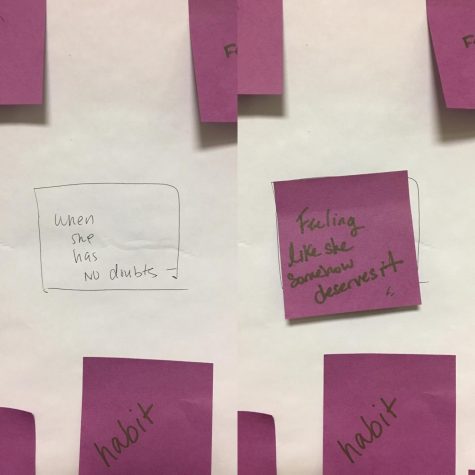 Whenever passing by the display now she glances towards the display, monitoring it for any new comments she has to cover up, a task she is motivated to do because she knows someone who stayed. “He came to me and told me about an incident that happened in their room, with their roommate, which is very alarming.”

Pellegrino added she was there for them, and clear in never doubting them. An action recommended by Orlando explaining social isolation can occur in situations, such as, an abusive partner creating a rift between the victim and their friends. Fifty-eight percent of friends are unaware of how to help, she says.  “They become more and more separated from their social support networks so then they feel like they can’t reach out to their friends.’”

While they want to change and educate minds they are hard pressed on reasoning for why someone would hold negative attitudes towards survivors. “To answer that question would require me to get into the heads of someone who would write that,” says McNair.

Orlando reflects on her experience creating similar displays for the “What Makes A Woman” Display with peer mentor groups and at the Westchester Mall. “Maybe, they are an abuser themselves… or they feel it is not a problem in their community,” says Orlando.