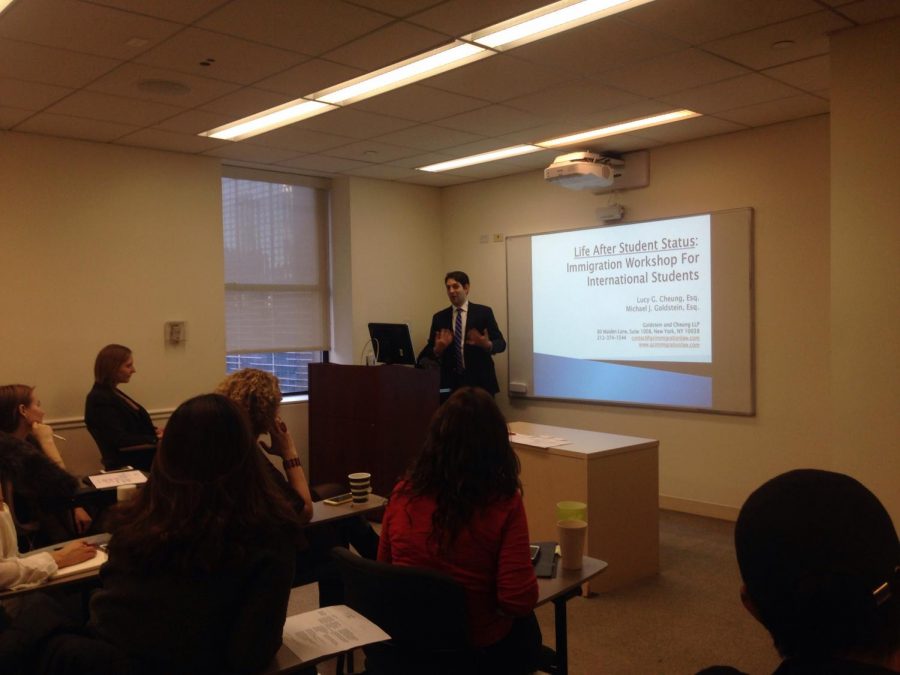 Following his father’s footsteps, Michael J. Goldstein became an immigration lawyer and has been for seven years. He works in Goldstein and Chung LLP and has helped many international students as well as immigrants find ways to stay in America whether it be by sponsorship or getting their green cards.

Last month, he spoke to Mercy College students about concerns that did not exist a year ago  – employment, green cards and visas.

In order for an international student to study in America, he or she must complete an I-20 form  to apply for a F-1 visa in order obtain student status and have a chance to work in the United States. Students must then complete the SEVIS (Student Exchange Visitors Information System.) It allows schools or other sponsoring organization to transmit the student’s database to Immigration and Naturalization Service. It is a way for INS to know about any changes or action taken in the student’s academic career.

“A student is eligible for F-1 visa status if they are funded by an outside or personal source or both. F-1 students are eligible for an OPT which is an off-site program that students can participate and learn about their field of study,” he said.

It also gives the students a chance to work for one year per education level on a student visa.  An F-1 is issued for an international student who is attending a U.S school full-time. They can only stay in the country if they are enrolled in a school and have 60 days to leave the country once completed. If they find someone to sponsor them, then they can stay longer.

Cuong Nguyen is a graduate student from Vietnam studying in America for two years and  is earning his master’s degree in business administration.

Before Nguyen applied to Mercy, he came to America with a G-1 visa in order to work for a year. He went to South Carolina for an internship, but once the training program was completed and the visa was expired, he was expected to return to Vietnam. Nguyen didn’t want to so he applied for an MBA at Mercy.

Nguyen will be finished with school in May, which still gives him five months to look for a job or company that can sponsor him.

“I have to go back to my country if I don’t get an employer or a company to sponsor me. I need to apply to OPT in February.  OPT only gives me one year to stay and after that one year hopefully I can get sponsorship,”  Nguyen shared.

Katharina Oberdiek is also seeking sponsorship. She has been studying at Mercy College for three months and is starting her winter quarter. Oberdiek is currently an MBA student majoring in finance from Germany.  She has not yet found an employer or company to sponsor her due to the difficulty. Companies and employers have to pay around $5,000 to sponsor an international student, an amount that not many want to pay.

“I haven’t gotten an employer to sponsor me yet but I keep looking for job opportunities and potential sponsorship for the future,” Oberdiek said.

It is also tough on employers to sponsor international students not only because they have to pay but because they also have to confirm that they couldn’t find an American citizen to do the job, says Goldstein.

Once the employer offers the student the job and applies for their H1B, the student can work for up to six year in the U.S with H1B visa. After those six years, the student can either go back to their country or apply for a green card.

Those who want a green card have several options, one being sponsored by an employer. If the student can get multiple sponsors, they can stay longer, but it would be more expensive, and self-employment is not allowed.

Marrying someone who is a U.S citizen  is the easiest way to obtain a green card.  Another way is if the person can prove that their country is at risk and their life is at risk in their home country, then they are eligible for a political asylum. Enrolling in the U.S military is another option. He or she is eligible to join even without a green card but only if the can confirm that they were an international student for two years. Last option is a green card lottery which is held every year. The application period is between October and November. Countries with a immigrants in the U.S are not eligible to apply so the chances of them getting it are very slim.

If Nguyen finds a company or employer to sponsor him then he has six years to stay in America. After those six years are up, he will draw in a lottery to see if he can get a green card. His chances are quite small considering how many people want to get their green cards. But if he does win in the lottery, he doesn’t have to pay the million dollars.

Mohammad Yusuf Khokar is another international students who is from Saudi Arabia and completed his undergrad degree in India in three years and is now a MBA student majoring in Market Business Administration.

In order to get accepted into Mercy College, he had to take an English exam, a math exam and wo letters of recommendation, and had his father sponsor him for an employment letter. Khokar has been here only three months and still is adopting to America and it’s laws. His brother is with him in America right now but he is going back to Saudi Arabia in January. Khokar is living with his father’s friends as he finishes his education in America.

“ When I feel ready, I will apply for OTP for now I am doing my studies. I need two more years with OTP to complete my masters,” Khokar said.

Khokar has a problem that he will need to face in a few months, his brother is getting married in Saudi Arabia and Khokar wants to be there for his brother to support him. But the problem is that the wedding will be during the spring semester which will make him miss several days from classes. Missing out on so many classes can have it’s consequences.

“ I’m going to miss classes which will make me fail. I might need a lawyer in case there is an issue when I come back. I might go to the attorney in the event for help but it costs too much,” Khokar said.

Goldstein consultations are $250 per hour but with a student discount, students can get $100 off their first visit. He advises students to be careful when consulting a lawyer because no lawyer will do anything for free. Immigration lawyers should cost about $2,000 to $3,000. Plus fees of $3,000. Goldstein has an advice for students who are looking for a lawyer.

“ Find an attorney who is valuable but not expensive. Cheapest is not always the best either, you get what you give.”

For international students and students who are looking for an immigration lawyer, please contact Goldstein and Cheung LLP at [email protected] or gcimmigrationlaw.com.