The March to the 2018 Election

Demonstrators at the Women's March are motivated to be vocal, make change, and vote this November. 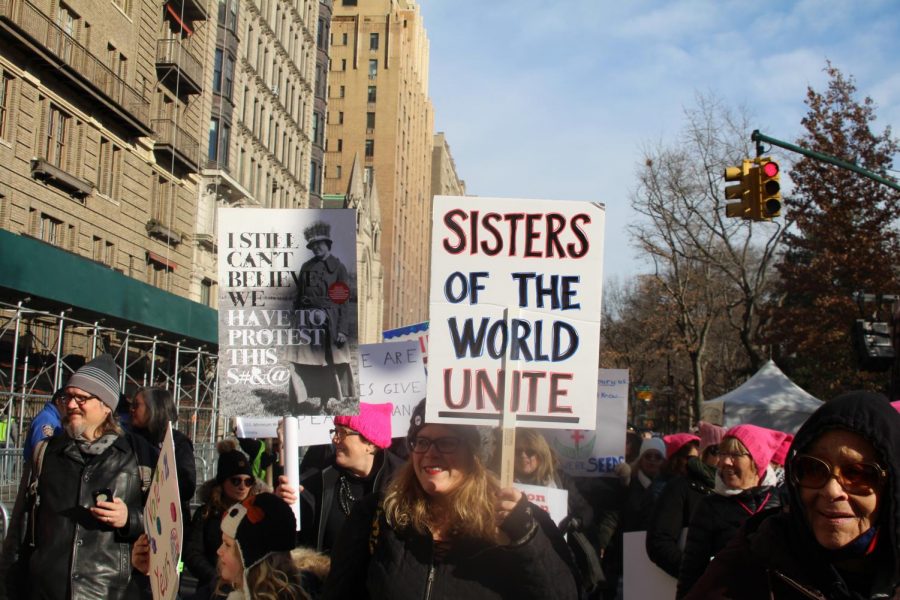 Thousands took to the streets of New York City to participate in the 2018 Women’s March on the one year anniversary of President Donald Trump’s inauguration. The view from above the march—starting on 8th Avenue along Central Park to 44th Street on 6th Avenue—resembled a pink-dotted tapestry of “pussy hats” of which many participants were sporting. Demonstrators carried signs proclaiming support for women, the LGBTQ community, people of color, undocumented immigrants, and opposition to Trump.

“Hey, hey, ho, ho, Donald Trump has got to go!” Chants rang through the air calling for an end to the actions and sentiments of President Trump and his administration. 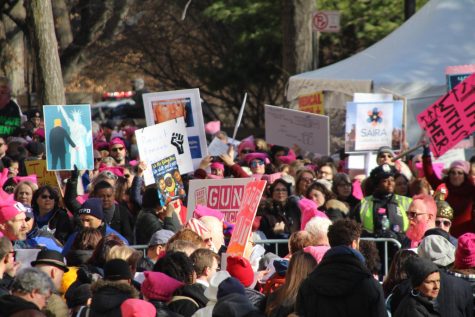 “The only good thing this idiocy of a Presidency has done is bring all these amazing people together,” said Chris Chapman, a member of Gays Against Guns (GAG), an LGBT advocacy group supporting gun control efforts.

“Last year, we were in despair. We marched in sadness and in fear. This year we are marching in strength,” said Beverly Neufeld, President of PowHer New York. An organization that began as an effort to push for equal pay in the state, and has become a collection of a hundred organizations across a spectrum of causes related to women’s rights.

The 2018 Women’s March served as the beginning of what Neufeld hopes to be a productive year. “I’m looking at what we can do and in New York. We can do a lot.”

Neufeld mentioned closing the wage gap, childcare funding, and reproductive rights among the important list of issues she hopes to tackle. She mentions two bills currently addressing reproductive rights and birth control: the Reproductive Act Health and Comprehensive Contraceptive Coverage Act. Both bills are currently referred to the Health, and Insurance committees in the New York State Senate.

“Here in New York we can push for progress,” Neufeld began. “This is who we are. This is what we should be,” she explained of her desire for New York to be an example for the country. 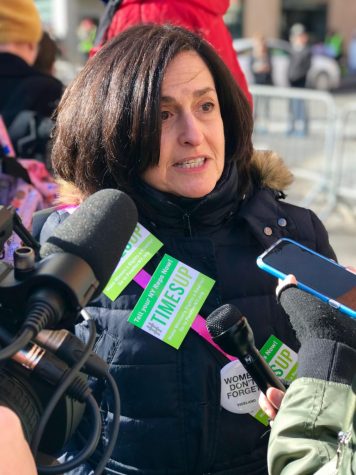 Her main focus is on New York State, but the national politics are still on her mind, as they are for most of the march. The focus on minority groups and women’s rights was still front and center, but it gained new company this year with the prominence of the 2018 midterm elections and registering voters. Before marchers filled the couple dozen blocks up to 86th Street, volunteers walked the blocks asking demonstrators passing by if they were registered to vote. The goal of the pre-march rally was to register one million voters in 2018.

Registering voters is one of the focuses in a new initiative, Power to the Polls, pioneered by the Women’s March that started in Las Vegas, Nevada. Power to the Polls’ main goal, as described on their website, is to spear-head a nation-wide tour that “targets swing states to register new voters, engage impacted communities, harness our collective energy to advocate for policies and candidates that reflect our values.”

Registering people to vote is merely the first step is seeing follow-through come election day. Enthusiasm and political issues obviously play a big role. At the march, enthusiasm could be found in abundance. “One-hundred percent likely. I am definitely voting,” says Evelyn Kennedy-Jaffe, who will be able to vote for the first time in November.

“We’re voting them out. The GOP you’re done. You’re done. You’re a bunch of old white men who have no decency. That have no humanity and we’re here to be patriotic protectors,” Chapman said, wearing a gladiator-style get-up with a rainbow flag as a cape.

“I vote every election, every single election. Most wonderful right,” said Elda McQuade, a resident of Westchester County who came to the United States as a Cuban refugee when she was eight years old. McQuade, along with her family, fled to the United States in 1961 before the government closed the borders as she retells it. The Castro-led government of Cuba would soon after require its citizens to obtain exit visas to travel outside the country, but would possibly lose their property if doing so, or faced prosecution or discrimination if returned to Cuba by the U.S.

“I want equality for all Americans,” McQuade said. Americans, McQuade insists, includes “Dreamers”—individuals who were brought by their parents to the United States. McQuade’s refugee past makes the issue of DACA and the Dreamers very personal to her. “They are part of America. We need to give them the same rights that they deserve.”

The Women’s March took place during the three day government shutdown. The shutdown, which has since been resolved, was pushed by the Democratic party as a means to getting the protection that Dreamers are afforded under DACA be reinstated as law. McQuade believes Democrats were right to take action.

The 2017 and 2018 elections are continually being recognized for their record setting number of female candidates, and high number of first-time candidates. Ashley Bennet was among the first-time female candidates when she ran for office in 2017. Bennett was not able to attend the Women’s March last year but proudly attended this year’s gathering as an activist as well as a politician.

Bennet spoke about the uncertainty she felt running as a first-time candidate who had never considered running for office before. “I realized if you wait until you feel ready, you may never take action. If you feel the call and you’re afraid, just do it afraid. You don’t have to be perfect. You just have to be willing,” she said between roars of applause.

Evelyn Kennedy-Jaffe is someone who has felt the call and is willing to run for elected office. “It has made me consider running for office in the future. It has made more aware of the other people around me and how I can support them,” she said.

A message Maddie Weiss seemed to have heard. The 16 year old from Ft. Lauderdale described how she has become more politically active over the past year to the disapproval of some of her fellow students.  A student at Westminster Academy located also in Ft. Lauderdale, she said students have told her not to be as vocal about her beliefs or attend events, such as the Women’s March because it’s embarrassing and people will make fun of her.

Weiss brushes off these criticisms.

“This is what I stand for and I’m not going to change to please you,” she asserts.

“Don’t tell my girls that they can’t do anything or be anything they want,” he said.

Her activism extends not only beyond her school, but within it as well. Weiss is in the process of starting a club at her school that better represents, “What [her] and a couple other people stand for.”

A club she describes as for Democrats, people of all races, and feminists, but an alternative to the political clubs at her school of which she says caters more towards white Conservatives.

Neufeld encourages actions like the ones Weiss has taken. She believes it will take more than voting to enact change. Actions, such as supporting organizations and speaking up on social media sites like Twitter were among her suggestions.

Britte Marsh, a friend of and fellow member of GAG with Chapman, suggested attending more demonstrations. Demonstrations that may not involve issues directing affecting themselves, but issues important to their allies. “We have to [show] up to our allies marches, to our allies protests, to our allies voicing against this awful President. We need to show up there to so we can sustain that momentum.” 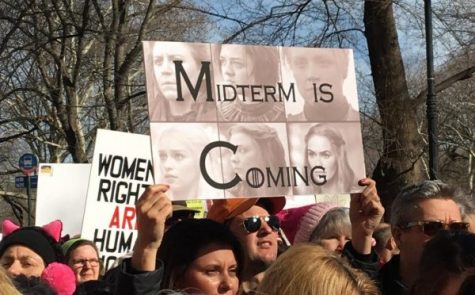 Marsh, a former organizer for Greenpeace, said that this is how people at the Women’s March will sustain momentum, momentum they will try to keep up heading into the 2018 midterms. Marchers are hoping continued support of the Women’s Movement will usher more women into elected office, like Neufeld.

“I hope we’ll be celebrating more women in Congress, in the state senate, and state assembly.”