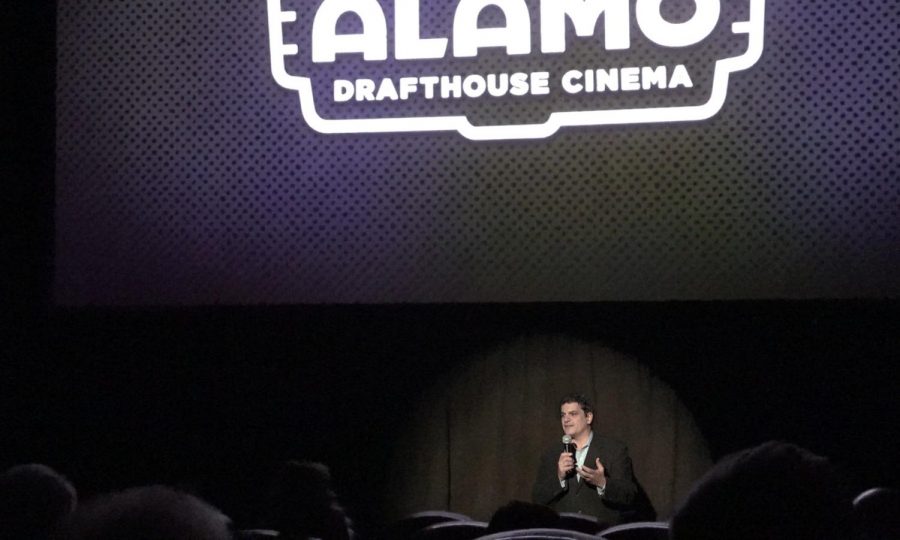 The movie theatre, the sanctum sanctorum for the film buff. The palace in which the film aficionado can lose themselves in the mind-numbing violence of a classic “Bang Bang Shoot Em Up” action flick. The cathedral of cinema in which the causal film critic can sit upon the edge of their seat gripped with excitement at who committed that dastardly murder in a “Who Done It?” flick.

Film fans are an eccentric and passionate bunch and the theatre is where they go to see them.

For film students taking classes in college, the joy of seeing films is still usually an enjoyable experience. However, they are often subjected to viewing films on a pull-down screen, whilst sitting in a “classroom” with seats that are about as comfortable as sitting on a cushion less metal chair leftover from several decades prior.

But for the students of Mercy college, they have the opportunity to view a few select films in one of those very palaces of film, The Alamo Drafthouse.  A cinema chain founded in 1997 and based in Austin that is dispersed throughout the United States and stretching from coast to coast, it is widely regarded as the true movie film goer’s theatre because of their stringent rules regarding theatre etiquette.

Basically, if your someone who despises people using their phones or talking during a film, the Alamo is the place for you. 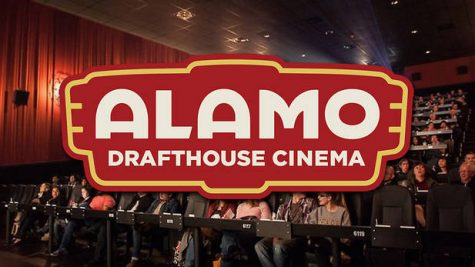 The partnership is between Mercy College and the Yonkers location of the chain will play host to several of the films Mercy students will see during the semester. The partnership was forged in the spring of 2017 thanks to an idea and a friendly connection to the theatre by  Prof. Steven DeRosa.

“It was exactly last spring, I knew that I was going to be teaching a Hitchcock class and I had a friend who knew Justin,” DeRosa says speaking of the Alamo’s creative director, Justin LaLiberty.

That was all it took as echoed by Justin, “Stephen and I have a mutual friend and was already a patron at The Alamo when he asked me about doing some Hitchcock screenings. I said yes, and that was that. Very simple origin story.”

As it turns out, the fusion of classroom and theatre was somewhat of a perfectly timed marriage according to DeRosa. “Justin said this was perfect timing as they were just starting a film club and he had wanted to partner with a college.”

The collaboration began during the fall semester of 2017. DeRosa had begun teaching the “Hitchcock’s Disciples” course that focused much of it’s attention towards the many ingenuities and groundbreaking techniques of the late director. The Alamo would also factor into the class by screening several of the films listed on the classes syllabus into their film club series including “Psycho” (1960) and “North by Northwest” (1959), many of which would often be followed by a discussion led by DeRosa not only for the students in attendance, but the other moviegoers as well which not doubt added a friendly air of competition between the two theatre going factions.

The Hitchcock Disciples class was dedicated to learning the craftmanship of the influential director. His contributions to film is a list that is just as long as his extensive film biography. Among many things, Hitchcock was famous for the term “McGuffin” or a plot element that drives the narrative of the story but does not create any such investment in the audience. He utilized the “McGuffin” plot device to a great extent in his film “The 39 Steps” (1935). However, one would be amiss without mentioning what has become Alfred Hitchcock’s calling card so to speak, “The Master of Suspense.” Hitchcock became famous to audiences for his ability to slowly build suspense into the minds of theatre goers. One of the most famous techniques was the use of montage, or as Hitchcock coined it, “complimentary pieces of film put together.”

The iconic shower scene was synonymous with this technique as the camera jettisoned back and forth between Marion Crane’s (Janet Leigh) shocked induced wide eye glare, back to the shadowy figure in mid murderous form, back to Crane wincing in pain, and even the strangers hand dropping from upon high to claim the life of the damsel in fatal distress. The death of Marion Crane served as another element of suspense – plot twists. Hitchcock had effectively created a safe assumption from the audience that they were on a ride together with Marion Crane that would play out for better or worse until the end. Hitchcock then swiftly ripped the rug of assumption out from under the audience’s feet and left them like a spurned lover at the alter wondering what happened. It was this technique that led Hitchcock to famously close off viewership to his films after they began to avoid late arrivals confusion.

The theatre environment only proved to be beneficial to Mercy students viewing classic Hitchcock films because the entire mood effectively changed as opposed to a classroom setting, according to Caroline Newman, a junior at Mercy. “You get a different perspective of watching an older black and white film then in the classroom, If I were watching Hitchcock I will get into it. I would be scooting down my chair or at the edge of my seat because it is a thriller.”

For Kaylee Stevens, a junior, she echoes the same sentiment of her classmates that a traditional theatre offers an experience that is only beneficial to their enjoyment. “It’s fun to get out of the classroom to see it in the setting it’s originally made for, the experience of seeing an older film in black and white is a little like time travel. You experience what people back then experienced.”

The childlike glee and thrill that is nurtured in a theatre setting is one aspect, however for students of Mercy, there is more to do than just enjoy the film. They are there to study it in its entirety. Every plot technique, stylistic choice, and camera angle is important to analyses. One might assume that a classroom would provide a setting to be viewed in a more scholastic approach in the same vein as note taking or lecture.

For students like Kaylee that fact is not lost upon them in the classroom.

“In class it’s more of an analytical feel, your looking more for the technical aspects, the production value and what goes into it.”

But for Kaylee, and her classmate, Macy Clarke, a sophomore, they both agree that while being in a classroom helps the approach to film more technically and analytically, the experience in a theatre helps it come along more organically, “It’s beneficial because in the classroom we always try to see it through a student’s side but the theatre is from an audience’s perspective which is what the director is aiming for.”

And that is ultimately what DeRosa is looking for, the perfect balance of enjoyment and observation during the theatre trips, last fall being Hitchcock and this spring focusing on the Golden Age of Hollywood.

“I wanted students to view film worthy of study, to get an understanding of what is Golden Age and why, the notion of “Hollywood” and what is a movie “star.” It really comes out of that period. We try to go through the technology like silent to sound, beginnings of special effects like stop motion, black and white to technicolor, and our notion of the Hollywood film narrative, the happy ending. It grew out of that.”

The Golden Age of Hollywood is roughly the 40-plus year period from 1917 and up until 1960. This time saw a creation of a narrative style or film making technique that was usually reflected by the time period it was made in. The majority of the depression era film scene throughout the thirties dealt with class disparity and a levelling of them such as one of the most famous examples of a golden age screwball comedy “It Happened One Night” (1934) starring Clark Gable and Claudette Colbert. Genre’s such as the gangster film capitalized on anxiety, anger, and ethnic tension within the depression ravaged nation and studios churned out famous films such as “Scarface” (1932) starring Paul Muni, Edward G Robinson in “Little Caesar” (1931), and the infamous “The Public Enemy” (1931) starring James Cagney. The thirties also saw the birth of the Universal Monster franchise in “Dracula” (1931), “Frankenstein” (1931), and “The Wolfman” (1941), and saw the arrival of comedy duo Abbott and Costello. The onset of the second World War saw a surge in films drizzled in wartime propaganda and patriotic fervor such as “Casablanca” (1942). The postwar years of Hollywood’s Golden Age also saw the antithesis of the wartime propaganda in the arrival of the dark, anxiety driven genre Film Noir that highlighted post war, nuclear, and cold war tensions. Film Noir as a genre was highlighted by classics such as “Double Indemnity” (1944), and “The Maltese Falcon” (1941). The American Western also played a large role throughout the Golden Age, driven by the tandem director actor duo of John Ford and John Wayne, together they helped create a sense of old American nostalgia in the face of such anxiety through classics such as “Stagecoach” (1939) and “The Searchers” (1956).

Like the experience of the Alamo,  DeRosa is looking to create other opportunities for students to create memories that will last beyond the classroom. It all relates to a simple change in one area, a class project. The project is part of an overall arch of the Golden Age as a whole and each student will contribute to filling in that history piece by piece.

“Each student has been assigned a studio and studies the beginning, middle, and end of the studio and we get an overall picture of how it evolved, stars who worked there, and how that star’s image was shaped,”  DeRosa adds.

In particular, DeRosa states that “One student has Paramount and will be studying Marlene Dietrich starting with “Morocco” (1930), she will follow that one star at that studio, another will study Bette Davis as we get into stronger roles for women,” he says.

Experiences like this are about having fun and sharing a passion with others who are like minded while learning. For students like Kaylee, being around other fans waiting eagerly to see a film only added to the anticipation, “Most of the time we are seeing the films for the first time but it felt special because we would get there early and there were people outside just as excited to the film as we were.”

And if nothing more, just for the ability to see a film at a theatre made for film junkies like Tim Fox, a senior, “It’s nice going to the Alamo because of it’s upgraded technology and a real movie screening atmosphere.”

The experience of seeing such films as intended cannot depreciated, and The Alamo is the perfect environment for film students says LaLiberty, “As a former film student in general, the theatrical experience is really important. Watching screenings in lecture halls or other classroom environments are a poor substitute for a legitimate cinema space. In Yonkers, we project either 35mm film or DCP, which is also much more true to the original intent of the filmmaker than watching a DVD or blu-ray on a TV.”

With both Hitchcock, and Golden Age Hollywood having taken part in the screenings at the Alamo Drafthouse, DeRosa now sets his sights on the long list of the next potential genre or series to have its moment in the spotlight, “I would like to show Screen Comedy and Clowns, other directors like Masters of Film: Hitchcock, Welles, Griffith, and I would like to do a modern Masters of Film such as Spielberg, Coppola, and Scorsese.”