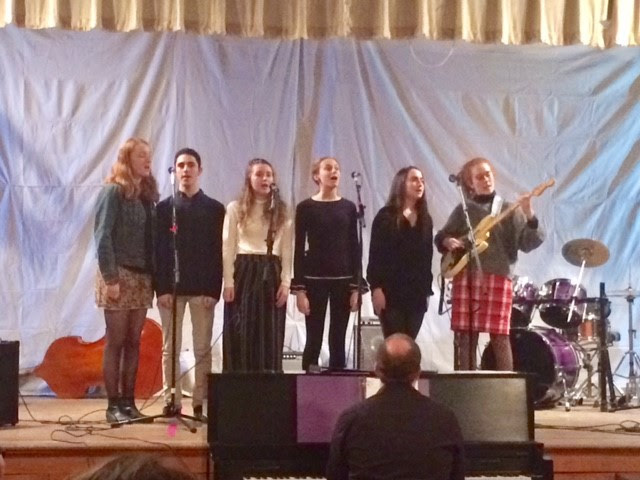 Sept. 20, 2017 is a date that will always remain at the forefront of Liana Garcia’s mind. As the category five-grade Hurricane Maria devastated islands throughout Central America, Garcia watched the news coverage and thought only of her family and friends in her home country of Puerto Rico. A current Irvington native, Garcia knew that she could not sit at home and do nothing; she had to help, but she didn’t know where to start.

Once Garcia got her feet on the ground in Puerto Rico, she saw firsthand how much damage the hurricane had left in its wake. Residents had been without power and water for weeks and food was scarce. During her time in Puerto Rico, she aided the Red Cross in distributing necessary materials such as food and water, bleach, and tarps. However, her work was far from finished.

Along the way, Garcia came into contact with community leaders and pastors from the local churches, and she couldn’t be more impressed by the work that they had been doing regardless of their personal circumstances.

“These were people who had been totally affected by the hurricane. Some of them have lost their homes; for example, some of the truck drivers had nothing at home, but they are still up at 4 a.m. every day to get the trucks loaded,” said Garcia.

Garcia has remained in contact with two of the pastors, one of whom is based in the city of Vega Baja, and has brought her mission stateside to Irvington, where she resides with her family. Garcia enlisted the help of Lenore Person and the youth group at South Presbyterian Church in bordering town Dobbs Ferry, partnering to produce a teen benefit concert for Puerto Rico. The teens were already eager to help, and once they heard of Garcia’s stories of providing on-site relief, the decision was a no-brainer.

The teens immediately got to work, calling in friends from both around the church and the community to take part in the cause. As word began to spread about the benefit and what Garcia, Person, and the youth group were trying to accomplish, they were met with nothing but constant support. The benefit sold out fairly quickly, but that did not stop people from trying to get in to see the results of everyone’s hard work, much to the group’s excitement.

“We’re psyched,” Person beamed. “It’s a great group of people who go to church here that know the small group of teens, friends, and family of both Liana and the teens who are involved.”

The benefit’s team and list of performers were comprised of residents in the surrounding river towns of Irvington, Dobbs Ferry, and Hastings.

Following the hurricane, it was safe to assume that the people of Puerto Rico needed help to rebuild their homes as well as their lives, but one issue in particular stuck with Garcia as she boarded the plane home. It was her hope to use the proceeds from the benefit towards purchasing mattresses for the citizens of Vega Baja.

“What I noticed the most while in Puerto Rico was that people were placing all of their ruined possessions out onto the curbs so that they could be taken away, and I saw a lot of mattresses. All I could think was ‘Oh my god, where are all of these people sleeping?'”

The community of Vega Baja is one that does not have many luxuries. Wooden houses with tin roofs that once lined the streets were completely destroyed. Necessities like mattresses would not be easily obtainable by the residents, which gave Garcia the idea to use the benefit funds to purchase them. As the damaged mattresses litter the streets, most residents have been forced to sleep on the floors of their homes, air mattresses, or sofas that are riddled with mold from water damage. Electricity has also been nonexistent, though it is slowly coming back, and Garcia has high hopes that there will be enough available to purchase propane tanks and portable stoves. The possibilities are endless.

“Linens, towels, clothing,” Garcia listed, counting on her fingers. “The pastor informed me that the children have absolutely no clean clothing to go to school in.”

As more support was being organized stateside with Garcia and the members of the church, it was revealed that FEMA was considering withdrawing all relief efforts from Puerto Rico after Jan 31. Garcia did not appear shocked, but was still visibly saddened by the news. Relief efforts have left much to be desired from government organizations such as the Red Cross, with the contrast between some of their earlier relief missions and the one for Puerto Rico being vastly disproportionate.

“The Red Cross during the recovery from [Hurricane] Harvey delivered hot meals to people who were affected. The Red Cross did not deliver one hot meal in Puerto Rico,” she explained. “FEMA was the same. They were supposed to deliver 6 million meals; I believe that they delivered 5,000, if that,” said Garcia.

Given the fact that Puerto Rico has been receiving little help from the United States government, Garcia insists that any contribution would be greatly appreciated. Families have been displaced from their homes and have found their way to New York with horror stories in tow. Some have been denied the base amount of money allocated for each family in Puerto Rico, while others receive the funds with no questions asked. Nevertheless, the residents of Puerto Rico are grateful for the support that they have, and continue to receive.

One Puerto Rican student whom Garcia has kept in contact with since her initial trip continually posts on Facebook of their gratitude, even going as far as to say that there are “angels out there helping us.”

Planning the benefit for Puerto Rico taught the teens that they had the power to make a difference even if they felt their efforts were small in comparison to what could be done. Profits from the showcase exceeded well over $3,000, but the effort would not stop here. Starting as early as Feb. 20, Garcia and a small group of teens from the church plan to travel to Puerto Rico with the proceeds from the benefit in order to begin to distribute mattresses. They currently have a second trip planned for March as well.

Although the event has come and gone, donations are still welcome. Interested parties can log on to www.teens4PR.org and donate in any monetary denomination.