Is Virtual Reality The Next Stage Of Social Interaction? 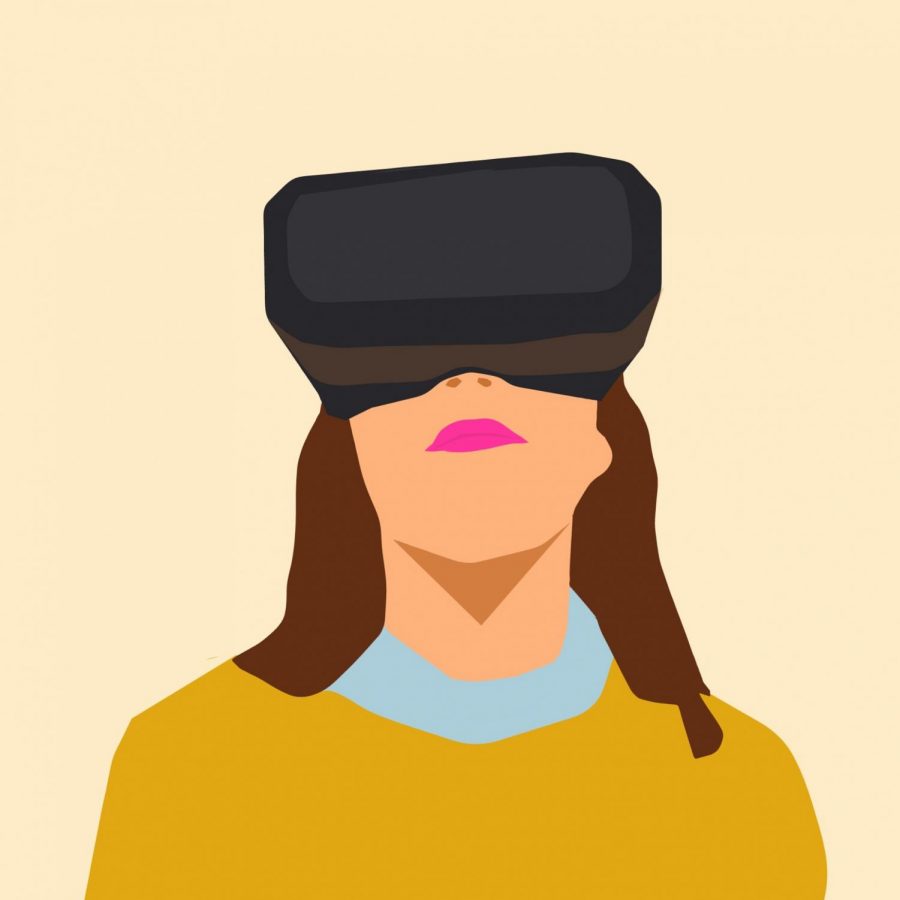 Virtual reality. A concept in which many may have believed wouldn’t exist until the future, but clearly the future is now.

Virtual reality is a computer-generated scenario that simulates a realistic experience through first-person 360-degree views.  To achieve this, the vessel of the system, which is known as a haptic system, emphasizes one’s senses through vibrations and motions. Most of the current virtual reality technology is assisted with headsets and hand controllers.

In 2018, virtual reality has engrossed not just YouTube but the wallets of copious amounts of individuals.

For Haubrich, the Google Cardboard was the first of many experiences with virtual reality. At only 18 years old, in January of 2015, Haubrich purchased the Google Cardboard on a whim. Haubrich’s virtual interests emerged at an early age when his father ran the tech department of a law firm.

After having researched the concept of virtual reality, Haubrich’s initial expectations of this technological approach was in some instances tampered by online reviewers. Yet, Haubrich persisted in his technological journey.

Subsequently, the flaws of Playstation’s version were beginning to show. The uses of lights to record positional tracking were not reliable enough for Haubrich’s wishes. There are certain checkpoints in a room in which the system will not identify one’s body.

According to Wareable, most virtual reality headsets are designed with a head-mounted display that generates two LCD displays, one per eye. Also commonly referred to as goggles, there are lenses that are placed between one’s eyes and the pixels. The 2D images being viewed through each eye, morph together to create a singular realistic 3D image. 3D audio headphones/earphones are also connected to the headsets to create a more substantial engagement.

These headsets also have head tracking which better assists users in fully immersing in a virtual world. By properly tracking one’s head movements, the picture can easily adjust either up, down, left, right, forward, or backward with hardly any buffering.

Haubrich now currently owns an Oculus Rift. The Oculus is scalable to rooms of any size. The system is also unique for its implementation of the Oculus Dash home screen. This beta update now allows users to view their desktop outside of just a game. Individuals can now open multiple tabs with a 360-degree view. One can look to the left and change the song on their Spotify playlist, then look forward to complete a Word document, look to the right for Twitter engagement, and turn all the way around to view a Youtube video.

One’s fight or flight responses come to life when immersed in this magnified reality. Whether it’s a fear of clowns, jump scares from a demon, or blood gushing from a zombie’s brain, virtual reality can place one in a mindset far more real than simply watching a horror movie.

Haubrich recalls his first horror game experience with the Oculus Rift as “a nightmare you can’t wake up from.” To him, hearing the eerie music and sound effects from every area of the room was unforgettable.

Haubrich first purchased the Oculus Rift for Mercy College’s Audio Engineering Society Club. As Vice President of the club, he felt that by his peers experiencing the 3D audio firsthand, would be significant in future job opportunities. As a result of this, Haubrich as now become desensitized to the experience and can’t play games on the system for longer than 45 minutes to an hour.

“The headset is uncomfortable, my eyes and ears become overwhelmed, and I end up with a feeling of fatigue,” said Haubrich.

According to Virtual Reality Society, there are three internal sensors that assist the movement and position of an individual wearing the headset. There is a magnetometer that determines one’s exact orientation of the compass plane North (N), East (E), South (S), and West (W). An accelerometer measures changes in velocity, specifically more minuscule movements in combination with the upward pull of gravity. This would identify movements on the up-down axis since gravity pulls in an upward motion. A gyroscope measures changes in primarily the rotational velocity of one’s body.

It is also necessary to recognize the possibility of motion sickness with new users, according to Haubrich’s personal experiences.

“It is best to avoid hyperactive games that involve shooting or rollercoasters on one’s first experience,” said Haubrich.

To access systems like the Oculus Rift and HTC Vive, it is essential for a potential buyer to purchase the correct PC that can handle the intricate software. Compatible PCs can add about $800 -$2,000 to the overall cost. Microsoft’s Windows is the only capable operating system to properly engage with virtual reality.

Junior Anthony Suarez, who is a computer science major and former vice president of Mercy College’s video game club, believes an ample aspect of virtual reality is the chatroom opportunities.

“You can see and interact with someone else’s unique avatar and chat with people from all over the world,” said Suarez.

VRChat is a new app recently released on the marketplace Steam. It explores user-generated rooms and allows users to interact with thousands of other people, according to Vice.

Virtual reality is in its first steps of assisting up-and-coming surgeons and training in the military. It is possible that with more experimentation that virtual reality will replace moments that many may feel should only be experienced in-person such as being in a movie theatre, being courtside at a basketball game, and sitting front row at a concert.

Haubrich wants to ensure all potential users know that, “it’s not like Black Mirror.”

According to Digi-Capital, projected revenues are topping $120 billion by 2020 for virtual reality platforms.