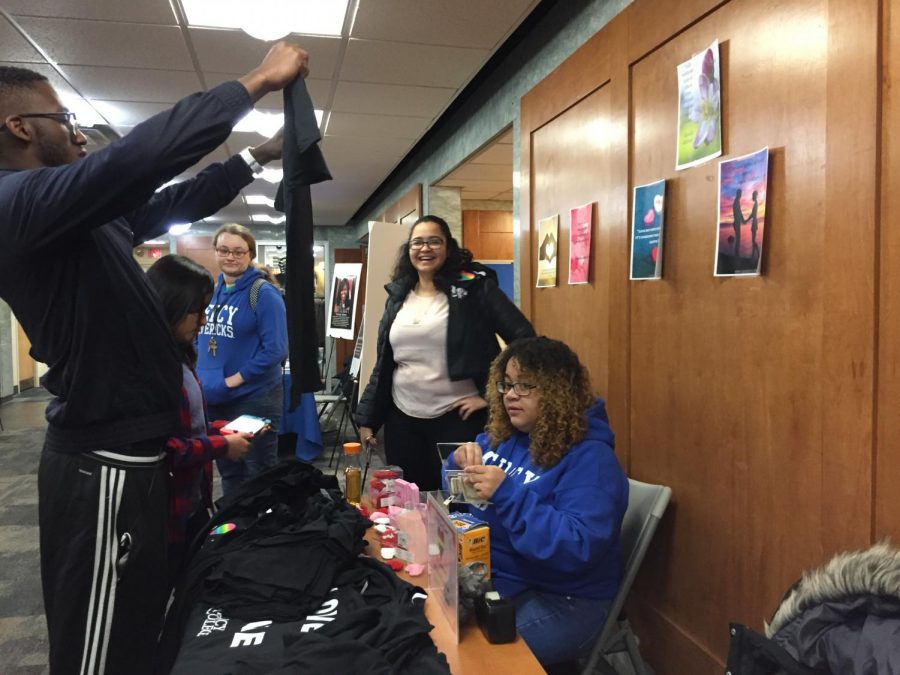 Mercy College decided to celebrate the month of love by showcasing their support to the LGBTQ community. On the 13th of February, the college had an event in which they displayed various ways of supportmentship with quotes about love, recording students on what love means to them and selling t-shirt that read Love is Love.

“We decided we wanted to do something regarding the LGBTQ communitty. We wanted them to feel welcomed and not excluded.” says Julissa Vasquez who is a junior majoring in social work and the person in charge of selling the t-shirts.

There were many popular quotes about love in the wall next to where the t-shirts were being sold. One of the quotes read, “Love is the only force capable of transforming an enemy into a friend” which was said by Martin Luther King Jr. Another was “Love isn’t something you find, it’s something that finds you” which was said by Loretta Young. A great quote said by Khalil Gibran was “Life without love is a like tree without blossoms and fruits.” Amongst many more.

The t-shirts came in various sizes ranging from extra small to double x-large and was black with the words written in white. Many people came to buy the t-shirts to support the movement. Approximately 25 to 50 people came to buy them. Most people bought double so in total they made over $100. The t-shirts were distributed to each of the campus. Dobbs Ferry having the most with 120 t-shirts, Bronx campus had around 100 t-shirts and Manhattan campus with 60 t-shirts since the campus is smaller than the rest. They were being sold for five dollars each and all the proceeds would be given to an LGBTQ organization.

“We were looking at organizations around Westchester to give the money to but we are open to donate it to any organization that needs it.” shares Julissa.

Many people who passed by expressed their happiness to see a school work together to support one another.

“We had a lot of professors who were really proud of us for doing this because not many people agree with the LGBTQ community so I guess they were really proud to see that they are in a school that supports them.” Julissa explains.

Those that didn’t have the money to donate, participated in doing a short video. The students had the opportunity to recorded on what love is love means to them. Jocelyn was one of the students who spoke in the video, she believes that love is wanting to see a person succeed and be the very best they can be.

“Love to me means that you care about someone unconditionally. You support them and are there for them. Everything you do is not because you are doing it for yourself, you’re doing it to better this person,” adds Jocelyn.

Jocelyn not only expressed her opinion on what love means to her but she also brought a t-shirt to support the LGBTQ community.

“I bought this shirt because it had a lot of meaning and I wanted to show my support. I’m going to be wearing it to let everyone know that anyone can love anyone they want and not feel ashamed of it.” said Jocelyn Gonzalez who is majoring in Psychology and Education and currently a junior.

The idea for this event was to showcase that love is love no matter who it is directed to. You can love whoever you want, it doesn’t matter if it’s the opposite sex or same sex. They specifically wanted it done in the month of February because Valentine’s Day lands on it and its a great time to celebrate love for one another. Jocelyn expressed the importance of this event and why it must be done in order to shut down haters who are against people loving the same sex.

“You being able to love who you want without judgment is the main idea. Some people think that it’s bad to love the same sex but it shouldn’t have to be that way. I don’t understand why those people want to stop their love and not let them be happy.” Jocelyn explains.

Julissa also participated in the videos and shared her meaning of what love is love means to her.

“ I feel that love doesn’t have meaning because love is everyone, you can find it anywhere. You can love that water bottle because you want it not that you need it. Love will be there no matter what. It’s not something you search for, it’s something that comes to you.”Julissa shares.

Although the LGBTQ community is growing and has become well known to many people, some students were not aware that there are organizations dedicated to the community. Jocelyn who is familiar to the community was one of the many people who didn’t know that there are organizations for them. She found out about it when buying the t-shirts and asking where the money would be going. It’s important to have events in school like this that not only show their support to different organizations but can also teach their students about it.

“I didn’t know there were organizations about the LGBTQ, I knew there was a community but not organizations. When I heard about Mercy donating money to their organization, I definitely wanted to support it and help out as much as I could.” Jocelyn said.

She believes that Mercy College should do an annual event where the students dedicate the day to show support to the LGBTQ community. Giving out stickers and having guest speakers who are part of that community come to all the campus to speak with the students are also amongst her ideas to let people know that the school is dedicated to support the community.

“Maybe showcase more rainbow colors around campus so they know we are supportive of them.” Jocelyn suggests.

This event was special to Julissa because she wanted to be part of an organization that shows love to one another. By giving their donations to the LGBTQ community, it gives them a sense of love and strength. That people still courage them to love whoever they want to love and to let them know that there are people out there who support them.

‘We decided to call this event love is love because Love IS love. There is no boundaries between love or any differences, it’s love. No one should get judged if they like the opposite sex or the same sex.” Julissa explains.

The term love is short but has a big meaning. Love has no definition because it’s just love, it has no face and no gender. Anyone can love whoever they want and whatever they want. Love comes in different shapes and form and no one has the right to decide who you get to love that’s the message Mercy College wanted to deliver to its students and staff.