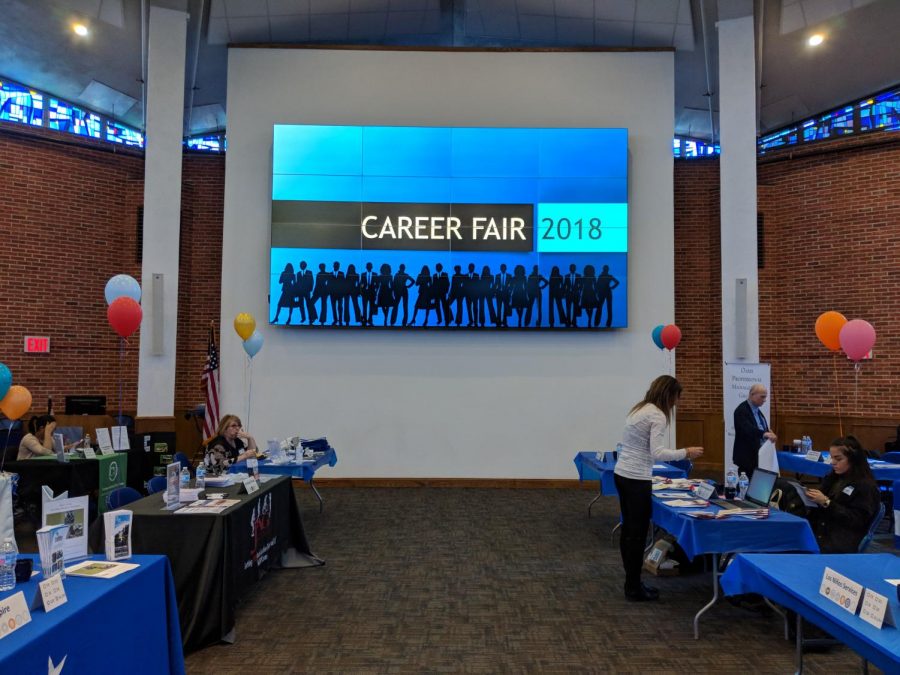 The ultimate goal of college, for most people, is to get a job and begin their career. This means applying to multiple positions and hoping for the best. But for some, waiting until one obtains a degree is just too long a period of time to go without a job. That’s when Mercy College’s Career Day Fair comes in handy for students. Not only does it help prepare for a future career, but it can help with job placement now.

On March 15, the college hosted the annual Career Fair in an attempt to assist students in finding jobs in their respective fields. Located in the Rotunda at Mercy Hall, the event hosted over 60 different employers across seven different “career communities.”

According to Shannon Hargrove, the career community system helps students find jobs that suit their needs. “Career Communities are based on what you might want to work in based on your major,” said Hargrove.

The seven communities that were offering jobs, were Public Service, Law and Government, Human Services and Education, Accounting Finance & Business, Health and Wellness, Clinical Healthcare, Media, Marketing and Communications, and Science, Tech and Math. Despite this roster of diverse communities, some job fields were more prominent than others at the Career Fair.

Communication companies, in particular, were severely lacking, along with any major tech companies. According to Hargrove, the college does note the appearance of bias at the career fair. However, she insists that this is only due to the hiring practices of certain companies, in that these fields generally hire in the fall.

“We keep in touch with big companies like Facebook and Apple, and they do respond to us, and in fact, they do recruit from the college. However, due to their hiring practices, they don’t send anyone to the fair,” explained Hargrove. “We have an advertisement team online, but we also have an outreach program to help find employers. But it’s ultimately up to the employer to sign up.”

When examining the number of companies that cover the needs of science/tech and math majors, only six companies ere in attendance while Human Service and education majors had massive twenty-nine companies.

Companies like “Canon USA Inc.”, “Crestwood Technology Group” and “Green Chimney” were in the minority compared to the massive number of public service companies like “CVR Associates”, “Leake and Watts” and “Liberty Resources POST”.

Finance and business had fifteen companies to choose from while health and wellness had nine companies. Financial companies like “AXA Advisors” and “Menchies’s Frozen Yogurt” shared space with “MVP Health Care” and “Mohawk Day Camp”.

Media only had five companies. Out of over sixty companies, media students only had “Adcorp Media Group”, “Los Ninos Services”, “Power Home Remodeling”, “SunPower by Infinity Solar” and by “Volunteer New York”.

It didn’t take long for students to see that they were limited in their choices at the Career Fair. Yvonre Weldingh, a senior finance major, experienced the struggle firsthand. Weldingh was in the market for an internship and chose to attend the career fair as a way of showing employers that she was serious about acquiring one. “I was interviewed by three people, and I got two who want to speak to me again. I do feel that one career path was heavily favored over the other, but I could still find people to talk to,” said Weldingh.

Another student who noticed the lack of diversity in jobs was Katherina Oberdiek, a grad student working towards a Master’s degree in finance. She is also an international student from the Czech Republic who was at the fair looking for an internship. “The fair was primarily focused on education jobs,” proclaimed Oberdiek.

On top of a visible disparity between job fields, some booths weren’t even properly prepared. Mantie Reid, a junior computer science major, went up to the booth run by Canon in order to get contact information but was disappointed in the result of the encounter.

“I went up to Canon to see if I could get their business card, but they ran out. They told me I could follow them online, but that’s not the best option. I’m not sure if I’ll be able to work with them since I can’t contact or follow them properly,” said Reid.

Business cards contain information that can be useful for getting in contact with specific individuals at a company; being unable to acquire a business card could mean that a potential employee might not be able to get in contact with the right people in order to get a job.

Upperclassmen were not the only ones trying to get a job, however. One freshman business major, Brian Mercedes , also attended the fair in search of some experience.

“It’s definitely a good idea to go just to get experience so you don’t have a breakdown during interviews. I went to the career fair in the fall and had a better experience. They let us sit during the interviews in the fall, which is easier than the standing at this fair.”

Mercy offers its annual Career Fair in both the spring and fall and offers invitations to local and national businesses and organizations.