Biking for a Cure

Mercy student's biking after her son's death has renewed her confidence, and desire for a degree 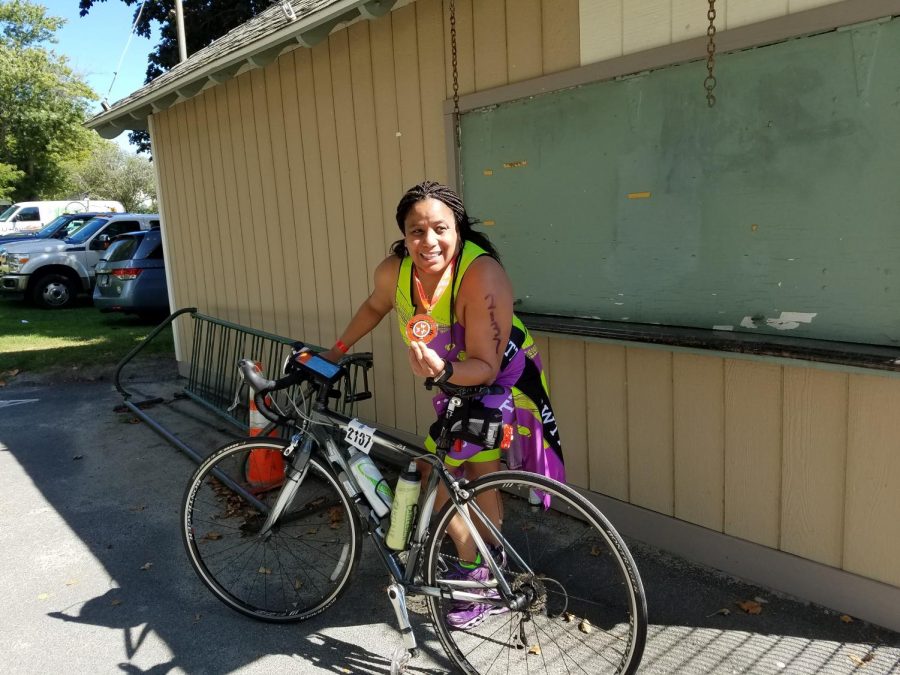 It was Dec. 8, 2010 when Regina Brewton-Smith’s 12-year-old son started complaining about the shooting pain in his left leg. She remembers this day so well since it was her husband’s birthday, and she was on the way to the hospital with Ryan, worried about what the mysterious pain might be.

“I remember feeling very anxious on the way to the hospital. I just wanted to know why he felt this way,” she said.

After taking an x-ray and doing a biopsy at Sloan Cancer Center in New York, the doctor came back with dreadful news for the Brewton-Smith family. Ryan was diagnosed with osteosarcoma, the most common form of bone cancer.

“Of course, it was tough news, but I had faith that we were going to get through it.”

Osteosarcoma occurs mostly in children and young adults, as it usually develops in areas where the bone is growing quickly, according to the American Cancer Society. Each year in the United States, about 400 children and teens under the age of 20 are diagnosed with this type of bone cancer, according to St. Jude Children’s Hospital Research. This is a statistic that the Brewton-Smith family know all too well.

Just a few months prior, Brewton-Smith decided to buy her first bicycle as an adult after reading a motivational article about a man who lost 320 pounds from cycling in the magazine, Bicycling.

In the story, the man described how riding a bike brought him back to his childhood and Brewton-Smith’s first time back on a bike made her feel exactly that – like a kid again.

“I was so free,” she explained. “I instantly loved being out there and felt such nostalgia for my childhood cycling days.”

She quickly joined Team in Training (TNT), a biking group set up through the Leukemia & Lymphoma Society of America that helps raise money for cancer research and began training for her first triathlon. The triathlon consisted of swimming for one mile, biking for 25 miles, and running 6.2 miles in consecutive order.

And while she didn’t know anyone who was directly affected by leukemia, Brewton-Smith had family and close friends who suffered from cancer, and she considered it a great cause. Plus, TNT provides training for her.

The night before the Jarden Westchester Triathlon in Sept. 2010, TNT had several cancer patients and survivors come speak to the cyclists before their big race.

Lily, a 7-year-old girl, stood up on stage and expressed how she was able to be there that day because of TNT and all of the work that they do for cancer research. To this day, TNT has raised over $1 billion for the Leukemia & Lymphoma Society, according to the foundation.

Lily’s speech brought Brewton-Smith to tears, so much that she excused herself to go to the restroom.

“It was so empowering that she was so grateful,” she added. “She was so young and so positive.”

At this point, Brewton-Smith didn’t feel that she was a strong enough swimmer to complete the triathlon, and she was contemplating not doing it.

But Lily’s speech brought her the motivation that she needed and seeing her three children on the sideline cheering her on gave her the boost to finish, even if it was second to last.

After that painful diagnosis a few months after she finished her race, Brewton-Smith decided that the Sloan Cancer Center was the best hospital for her son to start his chemotherapy treatment.

And while they were waiting, Brewton-Smith saw a familiar face among the crowd of patients. It was Lily, that motivational young girl, and of course, she had to approach her.

“We didn’t have that embracing moment that you would see in the movies. But everything became full circle when I saw her,” she said.

After nine months of chemotherapy, and surgery in which the bone in Ryan’s leg was removed and replaced with a metal rod, it seemed that he was going to be okay.

During this time where she was in and out of hospitals, Brewton-Smith enrolled at Mercy to receive her MBA.

“I wanted to reclaim some part of myself,” she mentioned. “So I decided to go back to school.”

Unfortunately, after almost a two-year battle with osteosarcoma, the cancer spread to parts of Ryan’s lungs and he passed in March of 2012 at the age of 14.

After his passing, which came a few months after she enrolled, she dropped out in order to deal with the loss of her son and be with her family during this difficult time.

“I was absolutely devastated,” Brewton-Smith said. “He was my only son, and it was hard to cope at times.”

It was almost four years before she decided to start cycling again.

“It was what I needed again. I fell away from one of the only things that brought me joy and it was time to start thinking of me again,” she said.

Brewton-Smith decided to start training with TNT once again and registered for the Westchester Triathlon’s Super Sprint in Rye, which consisted of swimming 300 yards, biking six miles, and running one mile in Aug. 2016.

“I finally got back to myself, and it felt so good,” she mentioned.

It was her first event without Ryan, and it was obvious to her that someone was missing.

“When I came out of the water to start the cycling portion, I looked over at my kids and it was very tough not seeing him there,” she expressed. “It was the most emotional part of it.”

“He got to see me at my first race, which is beyond special when I look back at it,” she mentioned. “All of my family has always been so supportive, and that’s something you don’t see everyday.”

The riding helped her realize that it was time to start over in other aspects of her life. Ryan would never want her to quit in any bike race. And now there was a different type of race that she was going to have to finish. All she had to do was get back up on that bike.

This past Jan., Brewton-Smith decided to reenroll at Mercy College and is now working towards her dual master’s degree in data analytics and marketing.

“Coming back to school now is everything to me,” she said. “I’ve started thinking of me again and I’m determined to see this one through.”

Along with a full-time course load and working full time for Con Edison, she will be participating in her first century ride on June 3.

This ride will take about 10 hours to complete, not including breaks for food and drink and to take in the view –  which is something Brewton-Smith plans on doing.

“I’ve never been east of Chicago so I will definitely stop and smell the roses,” she said. “I will probably be taking as many stops as possible.”

Besides pushing herself to bike as much as possible, she’s even done over 60 miles in a day. Brewton-Smith trains with her TNT team on the weekend and does a series of cardio, weight lifting, and mobility stretching on her own during the week.

She emphasizes that it’s not a race, so even if she finishes last, Brewton-Smith will be happy that she participated as she “always wants to do something that raises money for cancer.” And while the race does not specifically raise money for osteosarcoma, she believes research into all types of cancer is vital for finding a cure.

And since she won’t be listening to music during her 10 hour ride because it’s important to stay alert at all times, Brewton-Smith is positive what she’ll think about instead.

“I will definitely think of my son,” she explained. “I will be thinking about all of my kids.”

You can donate to her century ride here.