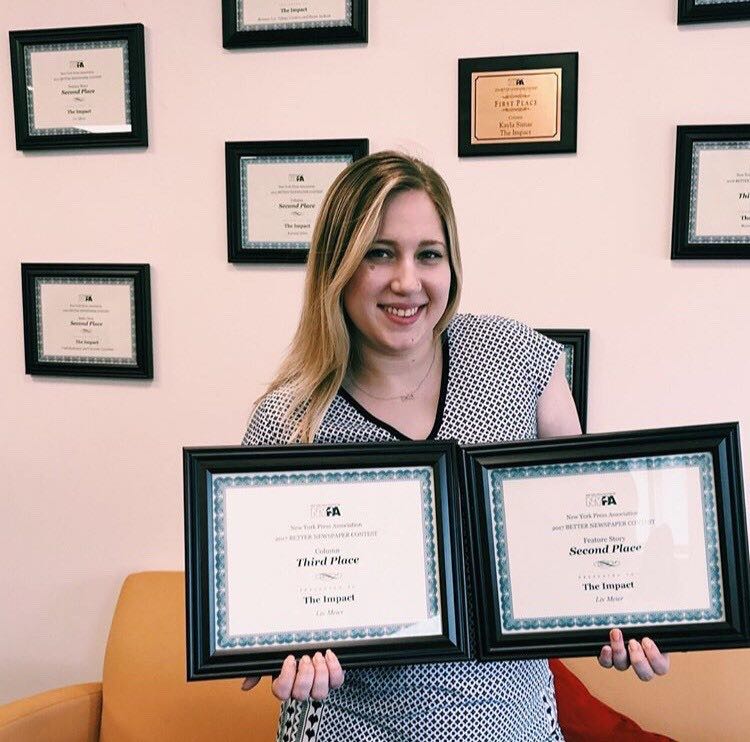 The Impact was awarded four journalism awards by the New York Press Association last week, earning the second most writing awards in the state for the third year in a row.

Winning the feature writing award was Higher Education Behind Bars: Inmate Heals Through The Arts. She recalled while writing that it was a difficult piece to work on, yet her subject had some wise words for her. “He said ‘this may turn out to the be the best story you have ever written,’and it looks like he was right.” 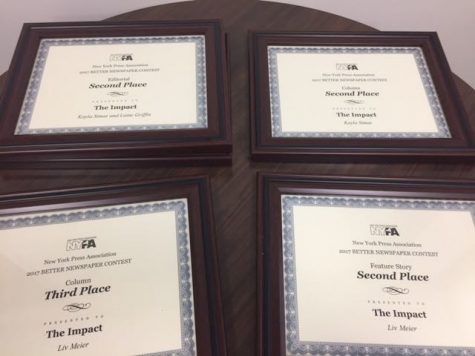 The judges agreed and commented, “Liv does a great job sharing the perspective of this very non-traditional student. It’s inspiring and offers perspective of part of the college’s outreach that most students were probably unaware of. Excellent work!”

The judges referred to her winning columns as “wonderful, personal writing”and that her father would be proud of her intelligent, feisty daughter for these following columns about being raised by her father and women’s reproductive rights.

Former Managing Editor Kayla Simas now owns the most NYPA awards in Impact history with three. Last year, her column, Winner Takes All, was the tops in the state. This year, she returned to win second place.

“She picked deeply personal topics and shared her truth with readers,”the judges commented on the pieces titled Strength in Letting Go and Starts With Goodbye….

The Impact has won four of the six awarded prizes in the Column Writing category over the past two years.

Simas won her second award of the year by winning second place with former Associate Editor Laine Griffin in the category of Editorial Writing. The judges referred their work on The Fearless Girl and on women who persisted as preaching but in the best possible way.

“There is lots of fire in those words,”the judges commented.

Impact advisor and Department of Communication and the Arts Chair, Michael Perrota, credits the creation of the Journalism Lab three years by Mercy College as a spark for the success, not to mention of the eagerness of the students to proudly represent their college publication.

“Everyone on the staff knows what is expected of them. We have thrived to make it one of the best college newspapers in the tri-state area, and I feel we have successfully done that.”

“It’s not a coincidence anymore and we are no longer a Cinderella. The Impact is one of the top publications in the state and we will keep working hard to get even better.”