Digging Up the Past At The Mercy Library 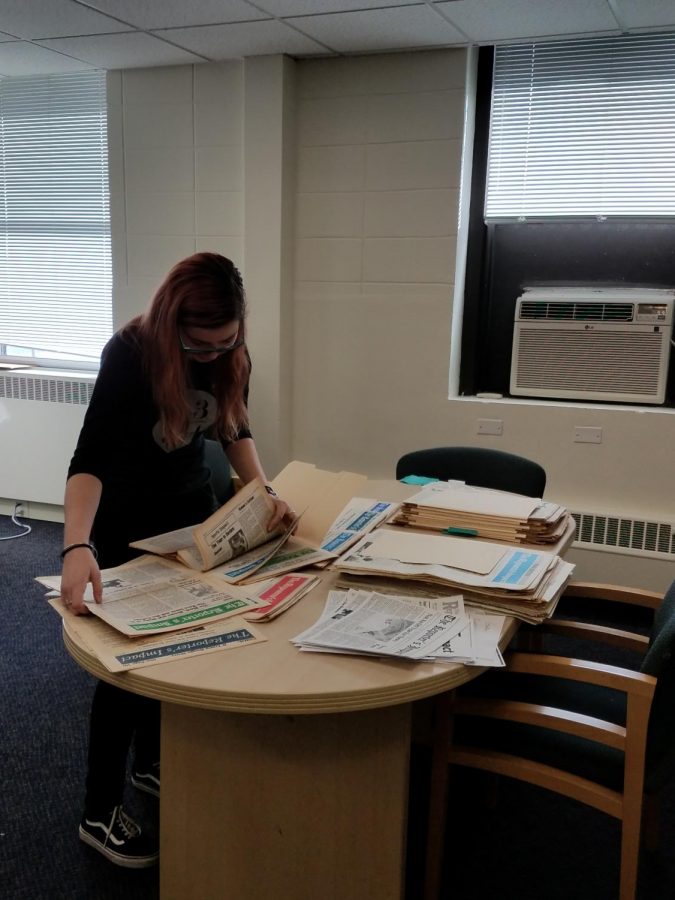 Archives are the physical space that holds the historical records of a location or institution. The idea of archives is often viewed as deep dark rooms in the lower levels of museums and bigger colleges. Mercy College has its own archives that students aren’t aware of. This archive isn’t underground or in some forgotten room. The Mercy archive is located in the back of the library, under the lock and key of the librarians, specifically headed by Tesse Santoro. She is the head librarian of the Dobbs Ferry Campus; whose previous experience involves corporate libraries that rely heavily on database research. They aren’t massive, just two medium sized bookshelves hold the entire main Mercy archive.

Mercy was founded in 1950 by the Sisters of Mercy and became a four-year institution in 1961. Since that time the Mercy archive has accumulated records, articles, documents, pictures and other items from 1950 through to today. While the archive holds things like student records, old course catalogs, and other miscellaneous things. There are some surprising things held within the archive that many would not expect to find in the records.

Inside the tour of the archive a table is laid out with many of the archive’s more interesting pieces. Dozens of photos are laid out, all black and white, showing moments of Mercy’s past. Some old editions of the Impact are lining the table, each issue different in design from the last. Other assorted things from the history of Mercy are laid across the table. Anniversary DVDs, old student publications, year books, and building records are neatly aligned in neat rows. Chunks of Mercy’s history is displayed across long table, moments in time capture through words and images.

“Student newspapers, student publications, old year books… and one offs, we call them miscellanies. Why in the heck was this done at Mercy College,” said Santoro.

The archive holds almost every copy of every student publication. Issues of the Impact and other student publications, ones that are still published and ones that haven’t been published in years are held in the archive. The Mercy archive has most issues of the Mercy Impact, if not all. The archive allows students to see the evolution of the design of the school paper. Certain articles from the old issues of the paper, ones deemed as important to the college’s history are being saved for digitization. Also held are old April Fool’s editions of the paper with humorous names like the Impacted Tooth.

Other not so shocking things in the archives is any and all blueprints for the campuses. Pages upon pages of plans, blueprints, proposals, and rough drafts of buildings and layouts fill these large binders. They have designs for the current campuses and former layouts of the campus, but also for proposed ideas for the campuses. Pages of what could have been Mercy college fill a good portion of these books. A master plan for all the Mercy campuses, not just the Dobbs Ferry campus are kept in the library.

“I was telling the head of facilities to see if they had a copy and they said no. I told him I’d let him borrow mine,” Santoro said with a laugh.

Some of the more unique documents held in the archives is the Town and Gown event, an event held to honor John F. Kennedy after his assassination. Among the documents for the Town and Gown event is a letter from the desk of Jacqueline Kennedy, thanking Mercy for holding the event. John F. Kennedy was the 35th President of the United States. He was assassinated on November 22nd, 1963 in Dallas, Texas. Many places across the nation were in mourning over the President’s death, Mercy was one of the few to receive this kind of letter of recognition and thanks for hosting the event.

The archives are currently undergoing an effort to digitize the entire archives. Many other places are beginning to create digital archives that allow people from all over the world to see their past. The goal is to scan the documents and to upload them for anyone to access them. Mercy may not be the biggest college, but even it has thousands of pages to be digitized. While the digitization is a slow process, it will be worthwhile in the long run.

“We will be up to about 20 percent, when we upload the current batch we have scanned.”

Digital archives are the newest trend in record keeping, with numerous institutions changing over. This is not meant to replace the physical archive, but to supplement it. Many people cannot physically visit a certain archive can now access digital archives remotely opening it up to the world. Mercy’s is slowly joining that class of digital archives, allowing students from anywhere to access their history.

It will take a few more years, but eventually the entire main archive will be online for all. While Mercy has one main archive, there are smaller ones around campus in different departments that are not open to students. The archive in the library holds information on everything, while the smaller ones around campus only hold things specific to their department, like financial records, student rosters and other records like those. The main Mercy archive has copies of the records held by the smaller archives around campus.

While not the biggest archive, it still boasts an impressive collection of documents from the history of Mercy. Through each document the evolution of the school is shown from its early days to the modern day. Mercy is an ever-changing institution, just like the students who enter its halls. The Mercy archives are constantly growing larger and larger as more history is made. The archives not only hold the history of the college, but also the students and faculty that were here. Thousands of men and women passed through the halls of Mercy, many who are now forgotten. The only place that still remembers every person is the archives.

“Those who cannot remember the past are doomed to repeat it.” –  George Santayana.