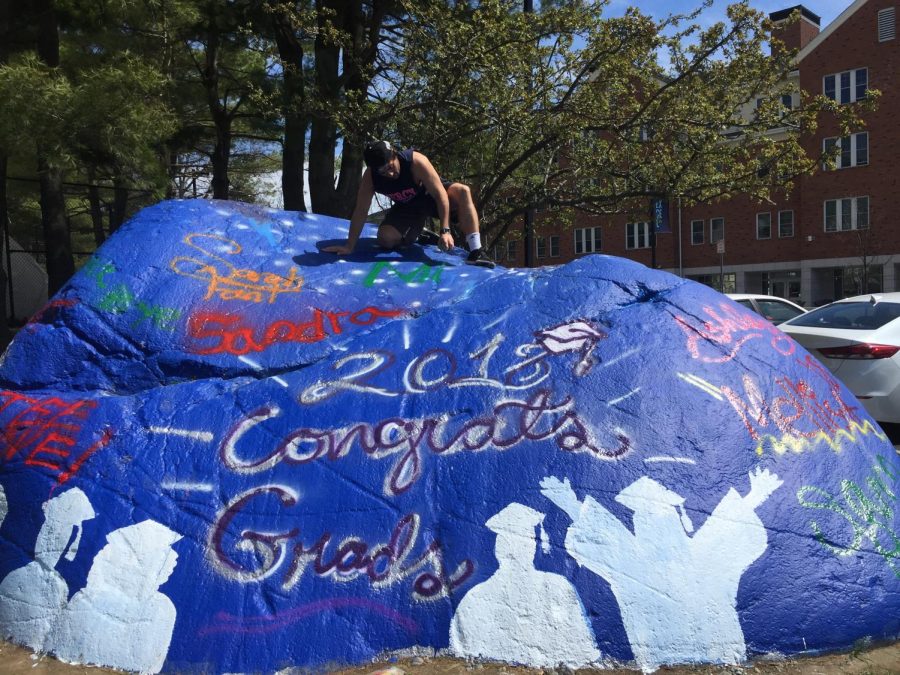 As the seniors make a tough decision on what to do once they graduate, they leave their marks before they are set to walk up the stage to pick up their diplomas in May.

Nicoll Baez, biology and pre-med, was in charge of getting as many seniors to sign their names on the rock and in the banner. She is also a senior graduating and was given the certificate of student leader of the year in this year’s Mavie Awards. She has also been a huge part of the student government during her stay in Mercy. Having made her successful transition from a senator in her freshman year, to a secretary, to a parliamentarian to the vice president to finally the president in her senior year.

¨One of my biggest achievements that I am most proud of is being part of Student Government. It has taught me a lot about myself and what I am capable of,” explains Nicoll.

She found her experience in working with the student government memorable and a way to help students let their voice be heard. She worked closely with the administration and President Tim Hall to make great changes in Mercy. With the help of everyone else working in the student government, they created a new guest policy as well as a new policy in which different genders can be paired up as roommates, this policy will be taking effect next semester.

¨ I am going to miss the people, they are like family to me and this place is like my home” says Nicoll.

Just like Nicoll, Tatiana Santiago who is a senior majoring in Criminal Justice will too miss her professors who have helped her along the way and have become extremely close with them. The biggest lesson she has learned here in Mercy is that her mind isn’t limit. There are times when she feels that she is being limited but then is reminded by friends and professors that if she puts her mind to it, she can do anything.

¨ When you doubt yourself and then you prove yourself wrong is a great accomplishment. Especially when you have your professors cheering you on,¨ says Tatiana.

Before she started to take courses in her major, she believed that criminal justice only focused on working around the police departments but as she took classes towards her major, she become aware that there is more to her field than what she thought.

¨ My mind has expanded and I´ve done my research so now I know I am not limited to one set of field in that career,¨ says Tatina as she praises Mercy College for helping her find her career path.

She believes that every school should have a learning and a writing center that can help the students with their papers and transition them from high school work to college work.

“Writing a paper is hard especially fresh out of high school. In high school, you get the one or two basic reports but in college it’s so different. I came here not knowing what an APA format was and the learning center definitely helped me get used to what is expected in college.¨ explains Tatiana.

Nicoll is one of the many graduates who is planning on attending grad school after graduation. But before she does, she plans on taking a semester off to study and apply to as many medical schools as she can. Her plan after going to medical school is to become a pediatrician and eventually a pediatrician surgeon.

Many seniors will be celebrating their accomplish from their four years of college in their graduating with family and friends who have supported them along the way. For Lorena Jimenez, a 20 year old majoring in Legal Studies, graduating college will be a different experience. She lost her mother two years ago, someone who was always there in all her graduations and who has supported her along the way.

“I always had my mom there when I graduated in the other school. She always told me to make something big out of my dreams so I know my mom will be proud of me. As I walk up the stage, I will be thinking about her,” says Lorena.

Lorena transferred from Westchester community college to Mercy college in the beginning of her junior year. She learned to appreciate what the professors in the college has taught her and prepared her for her career of choice.

Lorena made the dean’s list since she first attended Mercy College. She was in the honors group for having a GPA of 3.7. She has learned many responsibilities during her short time in Mercy College. She believes that she has become a better writer with the help of the professors, Kelly and Corey. She described Kelly as being ‘the best for caring about his students” and for giving her the freedom to express her writing in a creative nonfiction writing course. Corey this spring semester for Creative Writing: Nonfiction class and felt that this course gave her the freedom to express herself through writing.

Lorena gives a honest and thorough advice for the students who will be staying here for the next few years or so.

¨You have to be responsible because no one is going to come ask you if you need help, you have to do that on your own. You have to be the one to put yourself out there and make that first step.”

Just like many other seniors, Tatiana is having many emotions built up as her college years come to an end.

¨I am nervous and scared because all I´ve ever known in life was school but I am also excited because I get to actually contribute to society and in the world. I take what I´ve learned in Mercy with me after a graduate,¨ said Tatiana.

Lorena’s plan after graduating is to continue working in the law office she is currently working in and find an internship that involves immigration. Graduating college is a accomplish that will soon be completed in the next few days.

For Lorena and the many students who made their mark, it’s not just about getting a diploma and graduating college. She wants to leave her mark for the future generation to see her name as a student here who made a contribution to the school and community.