Science on the Barge: Increasing Awareness for Sustainability 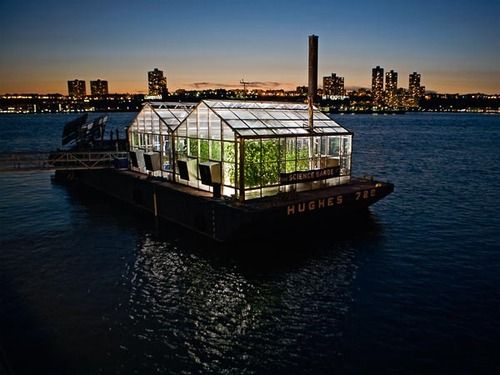 Spiking temperatures, deforestation, extreme weather patterns, drought, and wildfires. These are just a small sampling on the checklist of global warming symptoms. But while global warming may be the eye of the storm so to speak, it is not the only issue at hand.

Nature can only sustain a finite number of organisms within a certain environment before it becomes unsustainable. With a population estimated at around 7.7 billion and an estimated 9.7 billion by 2050, according to an article by the BBC, mankind has severely stretched the limits of what nature is capable of providing.

An educated and sophisticated society should be one that uses the scientific method to develop the most efficient techniques to sustain itself and then implement them,  and according to most experts, mankind has not done so. This issue is even further confounding when accounting for the alarming report by the United Nations that predicts catastrophic change if greenhouse gas emissions are not cut by 2030.

For Prof. T.H Culhane, founder of Solar Cities, National Geographic Explorer, and Mercy College professor, he believes that in time, people will realize the advantages.

“I remain optimistic because my wife and I live it and we know it works and saves us all sorts of headaches and hassles. We don’t have to take out the garbage except once a year (to recycle). We have no smells, no flies, no rats or cats or feral dogs or raccoons and no potential for diseases like cholera because all of our organic material is safely and odorlessy treated by our home biodigesters.”

That’s not all. There are other factors as well.

“We pay no gas bills because we have the biogas to run our stove and hot water. We pay no electric bills because we have our own self-installed solar panels running our lights and microwave and big screen TV and washing machine and dishwasher and Xbox One. When the rest of the community loses power because of a hurricane or blackout for days, our power stays on. We grow some of our own food without needing soil because we have the liquid fertilizer from the biodigester — for free. So you know we are never going to stop. And we know our impact on our environment is very low relative to other people.”

And one of the most recent examples of sustainable technology is the Science Barge.

The Science Barge, developed by NY Sun Works, was acquired by Groundwork Hudson Valley in 2008. The barge is a prototype for urban sustainable farming. Its goal is to serve Yonkers and the surrounding Hudson Valley as an educational center.

For Culhane, these outreach centers are integral to the cause because it’s all about community.

“We can trace most of the sustainability crises we are facing to a lack of respect for individuals and communities affected by ‘consumption and production residuals’ a.k.a. garbage and pollution. Environmental problems are really environmental justice issues. Many so-called “environmental campaigns” tend to “blame the victim” by focusing on the contribution we and our families make to the problem without considering how constrained our choices really are. Upstream, there are very powerful and wealthy entities profiting off of our inability to make paradigm-shifting choices. When we reach out to the community and raise awareness about true sustainability — focusing on the self-reliance and community resilience options that are out there — we can show “life tested” solutions in practical hands-on ways that are accessible and doable to an audience that is relatable by practitioners who are relatable. That is the nature of the community. It is micro-economic in nature. We help each other. Then we don’t need to feel we must rely on unsustainable and dysfunctional sectors of the macro-economy.”

Culhane believes that if people want to they will eventually see the path. “Whether they will join us in this happy lifestyle is up to them, and while I am optimistic that many many people will make the shift once they know about it (and many have and are shifting). I can’t guarantee that everybody will move to sustainability because people are “herd animals” and the current “shepherds” are too often “wolves in shepherd’s clothing” leading people astray for profit.”

He adds that the current business model is to “prey” on people’s ignorance and addict them to consumables that are not sustainable.

“Sustainability can be bad for bad businesses. Only a new circular economy can create a situation where small businesses flourish without harming people or planet, and too many people have been seduced into the “short-term fix” and the ‘get rich quick at the expense of others’ con.”

Culhane says he likes to teach by example so he is not pessimistic. “People are also smart, and when they see something works, it is pretty hard to hold them back for too long, at least in a democracy. The real question is, will we be able to preserve democracy through the coming transitions so we can all jump on board the new green economy bandwagon?

Unlike more suburban and rural areas, where living off the land responsibly is more feasible, those who live in urban areas find it harder to not rely on “the grid.” The majority of people in urban areas live either in condominiums or apartments. The clustered buildings and complex layout of urban areas, New York City especially, make it even more difficult. An individual living in an urban setting will often have little space for a traditional garden to grow their own food. The issue for those living in urban areas is that they are often living within close proximity to a significant amount of other people, for this reason, structures in cities are usually designed vertically, not horizontally.

An individual living on a farm in Iowa will not find it difficult to sustain themselves power and food-wise, that is not the case for someone living in a two-bedroom apartment on the 23rd floor of a New York City Highrise.

The goal of the science barge is to prove that it is feasible.

Two issues that face urban residents is where do they generate power, and where could they produce their own food. What makes the Science Barge so crucial to awareness is for this exact purpose, they have the solution.

It is called a Hydroponic Tower Garden. 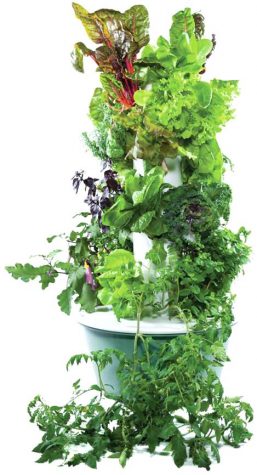 Hydroponics is a method for plant growth using a mineral nutrient solution in a water solvent, rather than the use of soil. Tower Gardens stand in a vertical position, like the residences of those who would use them. They are specialized in urban farming. Tower Gardens are built using a hardened polyurethane. A set of pods are vertically placed on four sides around the structure. Tower Gardens utilize a fibrous mineral called Rockwool as a replacement for soil. Following a seedlings germination, it is inserted into the Rockwool. Rockwool provides plant roots with consistent oxygen and moisture, resulting in faster and more substantial growth. The mineral solution is stored in a reservoir that is then pumped up the tower garden through a pipe from a centralized pump and then drips down the tower garden evenly distributing the solution amongst the seedlings nestled in their pods. A timer ensures this is completed on a set schedule.

Tower Gardens, utilized to a great extent by Solar Cities’ Kathy Puffer, who was also a key instructor along with Culhane on the barge, are a revolutionary design that eliminates the need for vast plots of land for a substantial garden. A tower garden can effectively yield significant amounts of whatever the chosen produce may be and can be stored in a space no bigger than the corner of the individual’s room. The Science Barge regularly produces fresh produce ranging from tomatoes, peppers, and melons, to eggplant and even popcorn. A tower garden also eliminates the need for store bought produce, which is often grown using pesticides harmful to the environment.

Now one has had food.  Next comes the power, which will be supplied by the Anaerobic Digester, or “Biodigester.”

When fed and properly maintained, a biodigester will produce biogas, which can then be used as a source of power. A biodigester is a large tank filled with bacteria that eat the organic material it is fed and in turn produces the flammable gas. A biodigester, like a stomach, should be fed with care and diligence, as under or overfeeding it will affect its production. Whatever the food source may be, food waste, manure, human waste, it will all be broken down and converted into methane gas by the bacteria which can be used to power lights, stoves, and any energy-related need the individual needs. A theoretical Highrise building in New York City that had hundreds of occupants would produce vast amounts of organic waste, both food, and human waste.

Culhane and Solar Cities do not refer to their digesters as stomachs, rather they have coined the term baby dragons or domestic dragons. “They are tanks of living microorganisms that literally eat and digest and pee out liquid organic fertilizer and fart out useful clean natural gas and when ignited in a cookstove, they ‘breathe fire.’

“The digesters we built at the science barge are “baby dragons” because they are small (made of 5-gallon water jugs) and need extra special care so they don’t get acid indigestion. But they are the same conceptually and in design as the big dragons, and biodigesters can be any size — in New York City those giant egg-shaped silver domes on the way to JFK airport are biodigesters turning the city’s organic “garbage” into biomethane to generate electricity.”

He mentions along the railroad tracks at Ludlow station, before one gets to Mercy College by the river, one will see the wastewater treatment plant flaring off their excess biogas day and night from a beautiful sculpture at the entrance. They power huge electric generators for their blowers and lights and operations from the biogas one contributes to when one uses an Insinkerator food grinder (garbage disposal) and toilet to send their dragons “feedstock.”

“Biogas is a fact of life — you make lots of it when you eat beans, for example. We just harness it at a practical home and community level by making these ‘artificial domestic dragons’ as ‘Home Biogas systems.'”

In this hypothetical building, occupants grow their own food and utilize the waste that comes from both consuming and discarding of it to power all the energy-related needs in that building. This process could theoretically leave a building located in the center of the grid, living completely off of it. 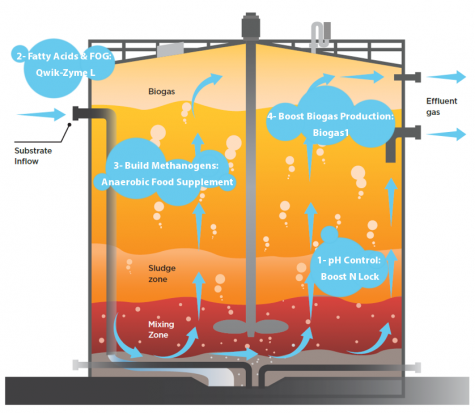 The Science Barge, utilizing the organic waste it produces, feeds its own biodigester to power the barge itself.

The end results are that the Science Barge is a completely off-grid structure. However, the barge currently operates on a wind and solar powered funtionality.

Tower gardens and biodigesters are just the starts of the hands-on and accessible experience of sustainability. It is this direct approach, this hands-on learning that will help increase awareness for the cause and educate people far better than a lecture or debate.

It’s the hands-on experience that Culhane feels will generate more awareness, “It takes sustained effort and interest to be sustainable. One hands-on experience can inspire and interest people but it isn’t enough. The “average” person needs many more encounters with the “doability” of the sustainability options and techniques and technologies, just as it takes several snowfall to get the ground to the right temperature and crystallization potential for a big snowfall to “stick”. So it demands what Walt Disney called “stick-to-it-ivity”. To inspire sticktoitivity in people we as instructors and allies need to show that we are committed for the long haul, that we will sustain our effort and that we expect that from everybody in the community.”

The Science Barge is open from mid-April through November and hosts weekday educational programs, field trips for schools and camps, and tours. The Science Barge Operates Saturdays and Sundays 12 p.m. to 6 p.m.