The Rise of Flag Football at Mercy College 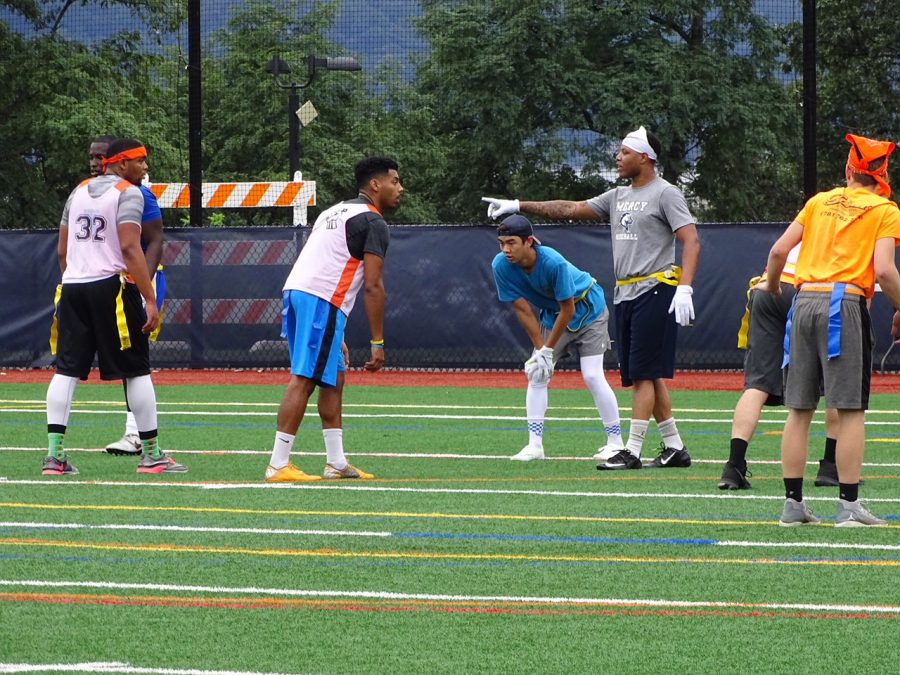 Mercy College has many sports teams and college athletes, however there are many students who played sports in high school that do not play on a team at Mercy. A few years ago, there were few ways for students who were not on a team to participate in a sport. That all changed last year.

In September of 2017, a group of students got together and decided to start the Mercy College Intramural Flag Football League. This league gives students an opportunity to play sports and play in a competitive league. The league began with four teams of 10 students each vying for the league championship. The season lasted until December, and Riches and Honors took home the league’s first championship after defeating Team Juice.

“The first season was such a success, and we were very pleased with the turnout,” said Smith Brickner, one of the Mercy students who started the league. Derek Napolitano, the league commissioner, stated that “the people who joined the league were people who played sports in high school but not in college, and since there were no intramurals, we thought that this would be a great way to add some more excitement to campus life.”

“It definitely gives us all something to look forward to every week. It’s very exciting,”  said Chris Ciriello, the quarterback for Team Juice and a senior at Mercy College.

Although they were unsuccessful in securing funding for the first season both Napolitano and Brickner were able to make it work. “Players paid out of pocket for the equipment that we needed,” said Napolitano. Brickner stated that “each player had to pay about $40 for the jerseys, flags, footballs and other equipment. We really just had to work with what we had.”

With the league turning out to be a success its popularity grew, more students wanted in. “This season the amount of players doubled and we were able to add two more teams,” said Napolitano.

With the success of the first season and the growing number of students that wanted to join the league for its second season, Mercy Student Life agreed to fund the second season. “Getting funded by Student Life was huge for us. This season we were able to get better equipment which I believe will really help the league moving forward,” said Brickner.

With funding secured and a new crop of players the second season began with an added hype to it. Opening day was huge success, Lessings barbecued hamburgers and hotdogs, and someone even set off fireworks, to the dismay of Mercy’s Campus Security.

So far the second season has gotten off to a fast start. The first game saw a rematch of last season’s championship, with defending champions Riches and Honors taking on Team Juice, with Team Juice coming out on top in a very exciting first game of the season.

The second game featured Cobra Kai against The Reapers, with Cobra Kai coming out on top in a blowout. Unfortunately the third game, which featured The Mafia going up against Los Toros, was called due to darkness.

“We were thrilled with how today went,” said Brickner. “Everyone did a great job and it’s nice to be able to do something exciting like this on campus.”

“It was nice to see so many fans come out and enjoy the games with us. We definitely have a greater fan base than last year,” said Napolitano.

“We have a good group of juniors and sophomores that are very involved,” says Napolitano. “The hope is to have the younger group take over and eventually move the league forward and help it to grow.”

With the flag football league growing and the second season getting off to a fantastic start, Mercy College may have found something very exciting for everyone to enjoy.