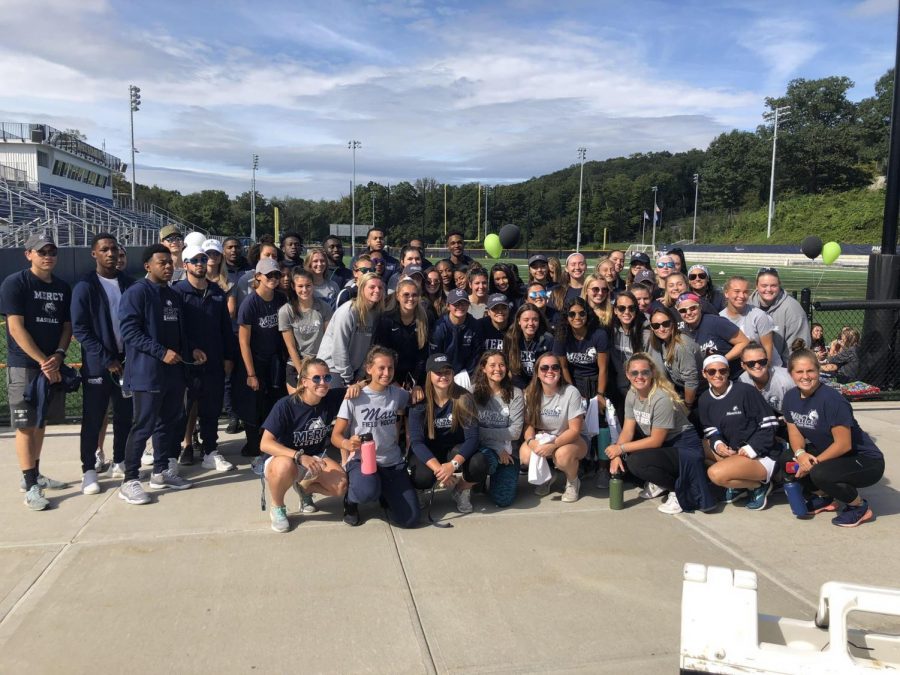 Mercy College Athletics represented the Mavericks at the first ever CODA Walk in the nation on Sept. 30 to raise awareness and bring co-occurring disorders “out of the shadows and into the light.” Over 80 students, athletes, coaches, and athletic administration from Mercy College, gathered alongside other universities, high schools, and organizations on the football field at Pace University, in a movement to be educated and empowered by The Harris Project.

The Harris Project is a non-profit organization, founded by Stephanie Marquesano, that started after her son, Harris Marquesano, passed away of an accidental drug overdose October of 2013. He was suffering from substance abuse and mental illness, which he was supposed to be receiving treatment for through his co-occurring disorder rehabilitation programs.

“When Harris died, all I kept thinking was, they said he had something and it was treatable, and I don’t understand what went wrong,” said Stephanie.

Left with nothing but a poem from Harris and his old belongings, Stephanie knew that something needed to be done to raise awareness for young people struggling with co-occurring disorders like Harris was. What sparked from that motivation was the Harris Project.

“Harris died on a Wednesday and his funeral was Sunday,” said Stephanie. “Between Wednesday and Sunday, I created the Harris Project at my kitchen table.”

“When he died I thought, Harris had something that had a name, and how is it that young people are dying over something that nobody’s ever heard of,” said Stephanie. “I wanted to raise awareness for mental illness and its connection with substance abuse.”

Seventy percent of those who misuse substances have co-occurring disorders.

“With these numbers, what my first step with the Harris Project that I wanted to do was prevention programming,” said Stephanie. “I wanted young people to understand the link so that they could get help and support for a mental health issue that might be emerging.”

Doing just that with the Harris Project, Stephanie has been raising awareness for co-occurring disorders for the past five years and successfully planned the first walk in the nation, in which the Mavericks had an opportunity to join.

The event began with speakers from the non-profit organization and their thoughts and opinions on the neglect of these disorders. After the representatives spoke, they held a banner at the beginning of the two mile walk, and walked through it in celebration of the awareness being spread to the participants.

In action and representing Mercy, some of the student athletes shared their thoughts about the walk and what it meant to them to participate.

Manny Sanchez, a sophomore pitcher on the baseball team at Mercy College, describes himself as a big community guy. He said, “In any way I can help and support a good cause, it makes my heart happy.”

Athletic Director of Mercy College, Matt Kilcullen, joined in the walk and made his point of importance when he helped organize this opportunity for the Maverick athletes to attend.

“It brings awareness, especially to young people, so they know there is help. Even if we just save one life, it’s well worth it,” said Kilcullen.

Each lap completed, another bead was gained to add onto the pipe cleaner given to each person. After completing the eight laps, there were games available to be played, organizations that could be spoken to, and CODA buttons, water bottles, brochures, and t-shirts to the leave the event with.

The Harris Project has raised awareness for co-occurring disorders and the overall goal is to stress the importance of it across the country. Stephanie and the Harris Project work will continue to work with high school and college students on trying to bring about awareness within each other when it comes to mental illness and especially substance abuse.

“What we want our young people to  realize is that they are the first best opportunity,” said Stephanie. “If young people start talking to each other about how they are feeling, then you can change outcomes. When you think about it, before we started, no one was talking about Co-Occurring Disorders, and now high school and college students are talking about it.”