The Blessings of Blood Are For Both The Donor and Recipient 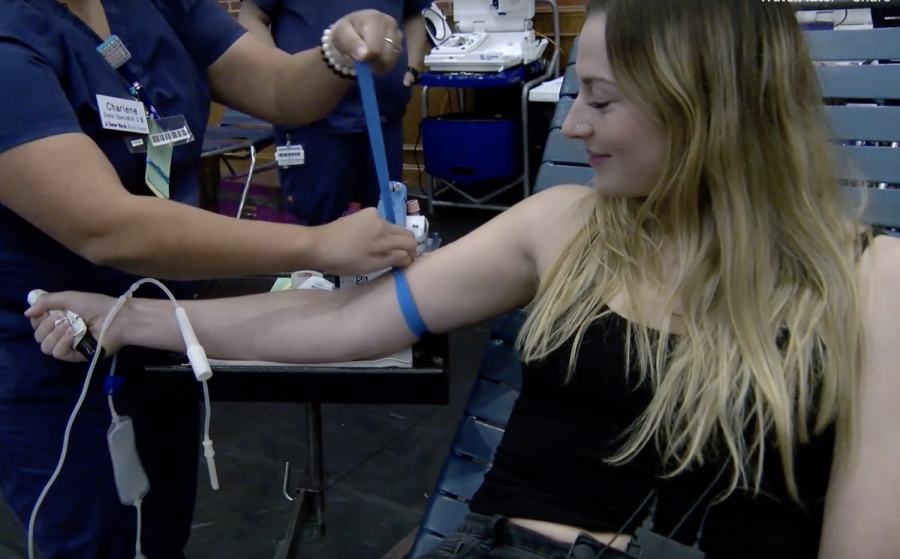 As I was striding toward the doors of the Rotunda to donate blood for the first time, I was nervous and I didn’t know what to expect. The only reference I had to donating blood was the experiences my family told me about when they gave blood.

My sister seized up.

My dad was nauseous.

Not glowing experiences. Yet, this didn’t discourage me from wanting to experience it on my own. I was anxious and excited to find out my blood type and perhaps save a life.

As soon as I walked in, I was greeted by a sweet woman who took down my information to send a donor card to my apartment and proceeded to reassure me that everything was going to be okay. She told me that what I was doing means everything to some who needs blood to live, and I’m changing and saving their lives. This hit me hard. Before hearing her say that, I didn’t take into consideration that something so taken for granted among humans and a fluid that supports our lives without our consciousness can be a lifeline to others.

I was informed to go to the computer to scan my temporary ID and complete a questionnaire regarding my health history. I read over the guidelines carefully, and made sure all my answers were accurate for my personal safety. Once I completed it, I sat in the blue fold out chairs in the waiting area, where I waited to meet with a blood donor representative. The assistant confirmed questions with me, sampled my blood pressure, and spoke to me about California. It made me feel more comfortable that he made an effort to talk to me about my home. It put my mind at ease.

After a couple tests, he informed me that I was a qualifier to donate double the amount of blood. I wasn’t opposed to the idea, in fact I was all for it- I wanted to make the experience well worth it and I thought it would be awesome to give as much blood as I possibly could. Unfortunately, when I was called over to the donation stations by the woman who was going to draw my blood, she informed me that my veins weren’t visible enough for the double donation.

One pint would have to do.

At this moment, I wasn’t scared. I was more excited than anything. To see how they would would prep me, to see which vein they would put the needle in, to go through the entire process. I lounged on the chair they had prepared for me, calm and ready, as she cleaned the surface of my arm and connected the needle to the machine. My right arm was straight out, resting on the side table next to me, and she wrapped a stretchy rubber band tight around my arm. I looked away after I saw her get ready to put the needle in, then turned my head back after I felt the pinch of the needle, intrigued by the dark red blood flowing from the tube into a plastic pouch.

I imagined that giving blood was going to hurt more, but like I said, I didn’t know what to expect. I heard it wasn’t bad at all, but I’m also not a fan of needles- at all. But when I was squeezing my fist, as the assistant instructed and the blood was draining from my veins, all I could do was smile and be excited that I was making a difference.

I was about to be Blood Sisters with a stranger.

Once the machine beeped and the blood bag was filled, I was satisfied. The donation was over, I physically felt good, and the smile was still on my face. She removed the needle, and wrapped my arm up in a green adhesive bandage, and sent me off to the snack table.

Arguably, the best part of the process.

The volunteers there insisted that I drink the cranberry juice or water provided, in fact, I could’ve had both if I wanted. Same goes with the snacks. The Oreos, the Lorna Doones’, the pretzels, the rice crackers- unlimited. I should do this more often.

I shared my pack of Oreos with a kind student who joined me at the table. I came to find he was in his first semester at Mercy as a nursing major, and it was his first time giving blood too. Luckily, we were in the same boat and his experience was fulfilling as well. He told me a little bit about himself, and we conversated to pass the time we were told to recover.

Before leaving, I thanked the sweet woman who checked me into the system, and told her that is wasn’t bad at all and I was glad I did it, adding that it wasn’t going to be my last. I made sure to grab a blood donor sticker and button as souvenirs to keep in my memory box. I wanted to make sure I would never forget my first time donating.

Despite the sore arm I had the next day, the experience was worth having a limp right arm. The soreness only lasted a day, so it wasn’t too life threatening. No bruise or wound in sight.

According to the Red Cross, every two seconds in the U.S., someone needs blood due to surgeries, illnesses, traumatic events and cancer treatment. One donation can actually save up to three lives, yet only about 38 percent of the public is eligible to give blood or platelets. Despite all the world’s technology, blood and platelets cannot be manufactured.

Nearly seven million people donate blood every year. I’m one of them now. And my blood doesn’t have a long shelf life. It has to be used within 42 days.

Immediately following my donation, I went over to my teammates house to do laundry. I was pleased to find that my teammate had also given blood earlier that day, so I wasn’t alone. This wasn’t her first time though, she was no amaetuer. She shared with me some of her wisdom of why she has continued to donate blood ever since her first donation her sophomore year of high school.

“There’s always a crisis somewhere and a need for blood, so why not donate when you are given the chance?”

Her thoughts reciprocated mine, understanding that the blood I gave was going to make an impact on someone else in a life or death crisis.

This experience meant more to me when I got an email thanking me for my donation, approving my blood, and displaying a digital donor card with my name and blood type on it. Type A+. After researching. I found out exactly what that meant. According to The Blood Connection, my blood type is the second most popular type, in which 1 in 3 people have and 35.7 percent of the population carries in in their veins. My donations are only effective to people with A+ type as well and AB+ recipients, leaving my blood as a crucial role in the donation community.

For anyone who is fighting for their life and depending on blood to save it, keep fighting.

I hope my blood is on its way to you.