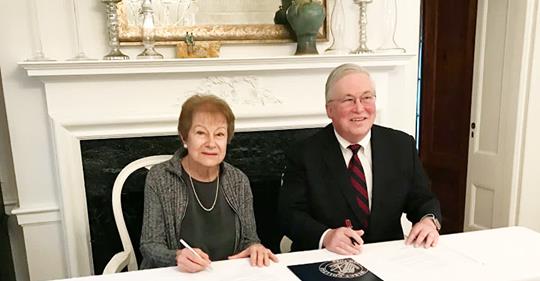 This donation will help recruit suitors with strong abilities to teach who can perfect success to future students here at Mercy College. When asked how what their reaction was when they found out the Dr. McKellar made this donation to the school.

McKellar, a former chair of the Mathematics department, said in a press release, “I am pleased to provide this gift to Mercy College,” said McKellar. “I am looking forward to seeing the positive impact these two positions will have in shaping the futures for students at Mercy College.”

“We are so thankful to Dr. McKellar for her transformative gift that will allow Mercy College to continue its support of faculty and students,” said Tim Hall, Mercy College President, in a press release.  “Marie was an instrumental part of our program here at Mercy as the department chair for 15 years and through this gift her legacy of supporting women and minorities in the fields of mathematics and computer sciences will be further cemented.”

Dr. Zhixiong Chen, Chair of the Math and Science department, was elated at the news.

The new positions will help focus on encouraging women and minorities to pursue degrees in mathematics and computer sciences. From what Chen had said above, McKellar cares very much about the women trying to get a degree in the field, which is why she is encouraging the tenure track professors to extend a hand to women but also minorities in the field so they can seek a degree in the field that they choose between math and computer sciences.

“Over 70 percent of our students are minorities and a majority of them are women, but in the math field, the number of women is not equal to the college number which is why the nation has low numbers in women in the math or STEM field.”

With McKellar making this donation, this is the largest donation received in Mercy College history. This is the first donation that is used to hire new faculty whereas the other donations granted to the school have been towards the ongoing construction at the school. This donation is supposed to go start in the 2019-2020 school year. With finding new faculty, the school will have to find someone who is willing to stay with the school up until their tenure review six years after they have first started the position.

“The donation will not go into effect until we find faculty as excited as we are and understands and is very passionate about the mandate.”

McKellar taught college and graduate school mathematics and statistics for thirty years and was department chair for fifteen years at Mercy College. She retired in 1994 and has since been associated with the American Association of University Women (AAUW) and with the Mathematics Association of America (MAA).

Support from other faculty is very important when it comes to hiring new faculty positions. It is more than likely that the faculty members in the department get along with one another majority of the time, even though there could be mutual differences between faculty members, it never gets to the point where it becomes harmful.

For many years, the concept of a tenure track position as it applies to job security, academic freedom, and career advancement was a trademark in American and Canadian universities, while tenure professors in European countries earned positions enduringly as a result of their governmental dependent position.

A tenure track faculty position means that it grants the professor permanent employment at the school and protects them from being removed with any sort of cause. It is also a process by which an assistant professor becomes an associate professor and then a professor. The concept is closely tied to academic progression and the professor who is on tenure track is expected to go up for a tenure review six years after they first started the position.

When on tenure review, faculty are expected to contribute to three elements. The three things contribute to is research, teaching, and service to the college. The reviewers will review the dossier which is something that prepares a professor for the rest of his or her career.

To fill out the positions, they will be sending out ads as soon as possible and expect to fill the position by the Fall of 2019.